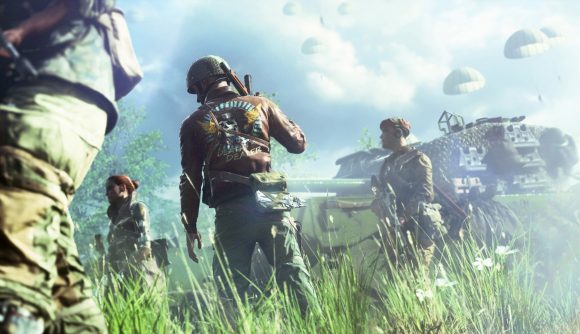 EA DICE has got one last content drop to send Battlefield 5′s way this summer, the studio’s announced on the FPS game’s website. Following the current Into the Jungle Chapter’s conclusion in less than a week’s time, the dev’s got one more update planned to add “some new content, weapons, and game tweaks”.

“As you are aware,” the studio says, “the current Battlefield V Chapter, Into the Jungle, wraps up on April 29. As we look to the future, we will release one more standalone update this summer that brings with it some new content, weapons, and game tweaks.” It adds that it’s “targeting June” for the update’s release, and that the Battlefield V tea, are “still tackling the challenges from working from home” at this time, and will keep players posted on how this content drop’s coming along over the coming month.

There’s not a lot of detail on what the update will bring in terms of new content, but EA DICE talks about what’s to come following its release.

The studio has plans for weekly rewards, which will give players Battlefield currency or company coin and the chance to scoop gear you might not have yet unlocked. In addition, there will be events and activities, “such as the reintroduction of ‘Friday Night Battlefield’ servers, where the community can play Battlefield V in a friendly atmosphere”, as well as ‘Throwback Thursdays’ aiming to bring players together across Battlefield games, past and present.

An update on the future of Battlefield V
👉 https://t.co/jZrHLe8oDt pic.twitter.com/feWvNoXVRu

“We are continuing our work on community games updates,” the studio also announces, saying it’s “committed” to keeping these coming to the game going forward. Plus, it’s also continuing its work on Battlefield V’s anti-cheat, too. Phew!

Head to the post here if you’re keen to read the details in full. Last year, the studio announced in an earnings report that the “next Battlefield game is set for FY22”, so it doesn’t look like this final update means a Battlefield 6 release date is on the way just yet. We do have a handy list of upcoming PC games to let you know what is on the horizon, however.