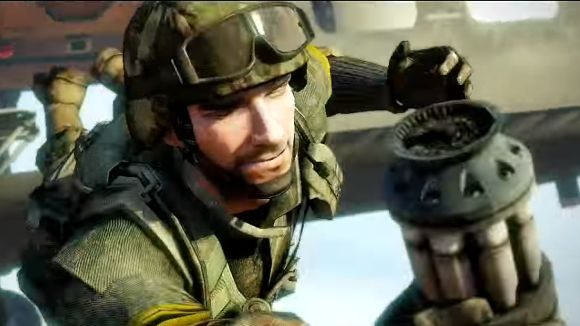 David Goldfarb, who worked on a number of DICE games, including a stint as lead designer on both Battlefield 3 and Battlefield: Bad Company 2, has taken to Twitter with an intro for Bad Company 3. Goldfarb left DICE way back in 2012, but it appears his attachment to the Bad Company series hasn’t waned.

Goldfarb tweeted to say that he was “in the shower” when a new “Bad Company 3 into struck me.” He waited little time putting his ideas to paper, it seems, as a draft of the intro script was posted to Twitter just a couple of hours after his initial tweet. You can check out the entire two-page script below.

It seems that Goldfarb’s script takes place a good few years after the events of Bad Company 2. It focuses on returning character George Haggard, the enthusiastic demolitions expert who you might remember from the original Bad Company games. Now middle-aged and no longer in the army, Haggard seems to have taken a job in a convenience store.

While it might have been years, there’s still some of the same old Haggard in there. For one thing, he’s introduced as a cashier staring longingly at an image of a monster truck – in Bad Company, Haggard says he’ll use his ill-gotten gains to buy a similar truck, which he would name ‘Truckasaurus Rex’.

The rest of the script focuses on a brief interaction with a teenager trying to buy cigarettes (and also steal) from Haggard. You can see the whole thing in Goldfarb’s tweets.

Goldfarb seems to still be working on the script, and at time of writing has recently tweeted to say that he’ll post some more pages tonight, so keep an eye on his Twitter account. Whether anything will actually ever come of the project is unknown, but it’s probably pretty unlikely. That said, Goldfarb has been chatting with his former DICE colleagues on Twitter, and several of them seem pretty enthusiastic, so who knows what the future could hold for Bad Company?