If you thought Battlefield Hardline was weird as it was – you know, with it being called Battlefield, but it actually being about cops ‘n’ robbers, and with the single-player having a bizarre alligator fight – it looks like its next DLC plans to jump the Megalodon.

It’s not out until next month, so why not play through our list of the best shooters on PC in the meantime.

While EA’s news post about the Betrayal DLC mentions it will introduce seven new weapons to the game, it doesn’t mention the massive claymore sword the balaclava-clad goon and the riot geared-up cop are holding while squaring off in that photo up there. It’s a touch jarring to see a cop holding a massive medieval sword, to say the least.

Here’s the official blurb: “So, it’s all come down to this. You’ve assembled a crew, pulled off the perfect heist, and made a whirlwind escape from the police. Now, there are enemies lurking in the frozen shadows, dark figures hiding behind crumbling mausoleums, and confrontations brewing in back alleys and federal prisons. Battlefield Hardline: Betrayal is coming this March 2016, and brings new maps, weapons, vehicles, and more.” 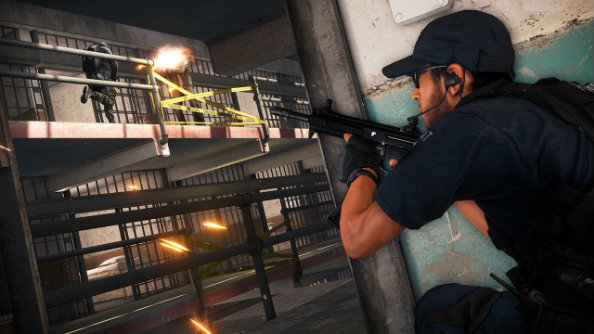 The new maps areAlcatraz, Cemetery, Chinatown, and Thin Ice, and some of those will presumably be better for using the sword than others. I imagine the tight confines of the prison will play in the favour of a sneaky, stabby player. Things probably won’t work out as well in some of the other maps, however, as the DLC will also bring two new vehicles. While EA haven’t announced what these are, the vehicles will probably win in a swordfight.

There’s also a base game update coming along with the DLC, and it includes 11 new weapons and new server presets. On top of all this, another tweak that comes along with the update will see every Gold Battlepack you open having the chance of containing a weapon license voucher – a Distinguished class item that unlocks an entire weapon license. You can also expect the usual bug fixes and tweaks, which will be announced on the official Battlefield Hardline forum. Betrayal is out in March for Premium members.