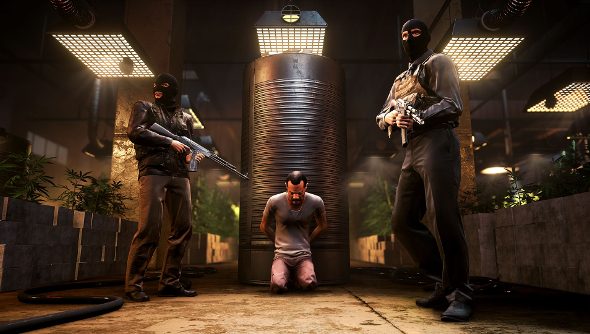 Mode mainstays like Conquest, where teams slaughter each other while attempting to capture and hold locations, and the self-explanatory Team Deathmatch are joined by smash and grab mode, Heist; Blood Money, where both teams fight over some intercepted loot; and high-speed pursuit mode, Hotwire.

There are two competitive modes, to boot, where players only have a single life to spare. Rescue sees the cops attempt to free hostages from the ne’er-do-well criminal team, while Crosshair pits them against each other as the crooks attempt to assassinate an ex-con turned state’s witness in the protection of the police.

The nine maps are a diverse bunch. In the heart of city there’s Bank Job and Downtown, where skyscrapers loom over avenues offering lots of places to snipe unaware foes or simply drive over them.

Further out is The Block, a suburb with a liquor store and bail bonds office that are fronts for criminals. It’s crook team’s home turf. Juxtaposed to The Block’s grottiness is Hollywood Heights, a map built around a luxurious mansion, with a wildfire raging behind it, set by criminals to distract the police.

Crooks can hole up in their own luxurious pad, too. Riptide is a smuggler’s haven built on a small group of islands next to the city, with police waiting across the bridges to raid it. Less glamorous is the Growhouse, an illegal weed operation that’s also about to be hit by a police raid.

Sticking to the drugs theme are Dustbowl, where the cops are trying to shut down a meth trafficking operation in a small desert town, and Derailed, where criminals make shady deals amid warehouses and scrapyards.

Battlefield Hardline is due out in March.