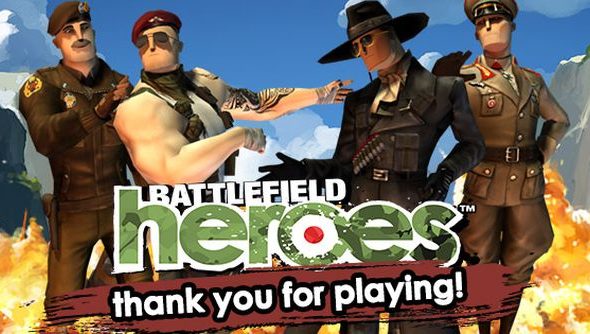 Battlefield Heroes, the low-spec, free-to-play spin-off conceived by DICE half a decade ago, is shuffling off its colourful coil before the summer ends. People liked it: its playerbase grew steadily to hit 10 million in 2012. But EA and current custodians Easy Studios have decided that now is the time to stop the service “in its entirety”.

“Battlefield Heroes is an older title that is not as popular as it once was,” said EA.

The story goes that despite bitter, undisclosed differences that’ve kept them fighting for years, the National and Royal factions at the centre of Heroes’ fighting have agreed on a truce. They’ll lay down their arms for good on Tuesday, July 14th.

“This is not an easy choice,” said an EA community manager. “We know some loyal fans will be disappointed, but we felt it was the right time to retire this veteran game.

“It’s been a pleasure for us to have entertained you for this long, and we hope you had as much fun playing Battlefield Heroes as we had creating it.”

All characters and progress will be deleted in July, and no refunds for in-game purchases will be available. EA are disabling further IAPs, and encouraging remaining players to spend any currency they might have now, and make the most of it before shutdown.

My brother and me had grand plans to play plenty of Battlefield: Heroes the summer before I went off to uni. The summer came and went, and Heroes stayed in beta: we thought it might never emerge. But it did, about a year later, and went on to do rather well for itself. Do you have any fond memories of one of Battlefield’s oddest cousins?