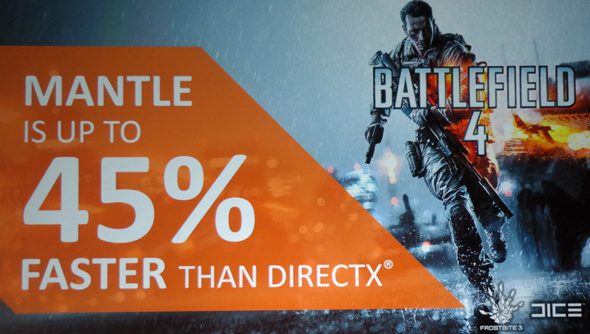 I’m an anonymous tipper in a phone box, you’re the PC hardware police, and I’m ringing to tell you that a series of newsbombs are due to go off at CES 2014 in just a handful of hours. No fewer than 12 third-party Steam Machines are planted around the show floor, and AMD plan to deploy a series of slides on their new Mantle API designed to blow DirectX out of the water, and your machine.

AMD’s Mantle will allow supported games to talk to graphics cards directly, rather than through dependable babelfish DirectX11. A similar system to that used in console development, AMD say it’ll noticeable improve performance. EA and DICE are already onboard in providing support for Frostbite 3.

‘Mantle is up to 45% faster than DirectX’, screams the first of two leaked slides, emblazoned with Battlefield 4’s key artwork.

A couple of important caveats: the 45% figure comes not from Battlefield, but Oxide Games’ Starswarm demo – a 64-bit engine test first shown in December that attempts to fill space with thousands of ships on-screen at once. And it doesn’t apply to just any generic AMD card – rather the A8-7600, a new APU from the Kaveri line the manufacturer is showing at CES. A very expensive AMD card.

It’s a claim and a half nonetheless. If AMD’s new bollocks turn out to be as doggy as they say, will you be busy justifying a new card to yourself this year?