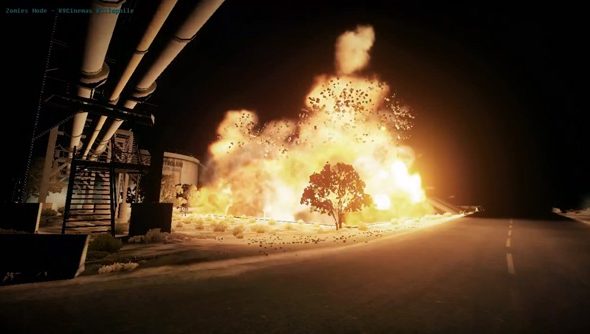 A wizard going by the name of Kiwidog has managed to mod Battlefield 3. Not only that, the modified game works on multiplayer. And on top of that, the night time mod he’s created makes Battlefield 3 look better than ever and makes the INVR scope actually worth using.

Whilst working on a machinima series, Kiwidog has developed what appears to be amodified FXAA injector that strips out the global lighting source from Battlefield 3 maps. This means that none of the surfaces are picking up the daylight and, unless illuminated by your flashlight or some other light in the scene, appear pitch black. Have a look for yourself:

Visually, Kiwidog’s night time is leaps significantly more impressive than the night in Tehran Highway (the only night time map currently in Battlefield 3). In Tehran Highway DICE’s night time looks like a heavy blue filter, it gives the impression of night but you can still see clearly. Kiwidog’s method may be almost too far in the other direction, but it does at least manage a true pitch black night, one which requires players to use flashlights and night vision.

Check it out whilst people are playing on it:

Exploding brick becomes more visceral when all you can see is it’s black silhouette in a dust cloud, and this actually gives you an opportunity to sneak up on people in the dark. In the grand scheme of things, this is a minor mod but DICE really need to take notice, people are itching to change their game. Imagine what the community could do if they had proper mod tools.

I’d assume these guys are all playing on a private server with Punk Buster switched off because most changes to the game’s files would result in a boot from a public match. I’ve contacted Kiwidog to see if he can provide further details, but it may be that unless you’re a friend of a friend of his, you may not be able to jump in on this game for a while.