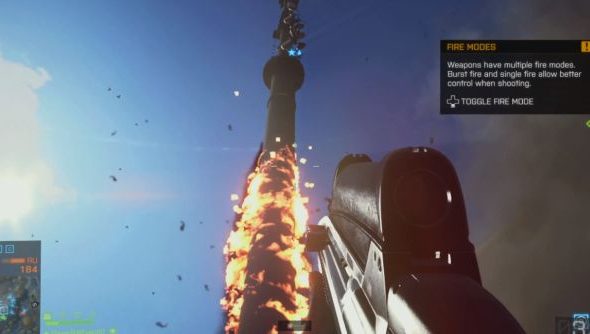 Ah, you missed it. There was a second-long assault happening right here, but now it’s done. Looked spectacular, I can tell you – there was a bang, and then all the buildings started to fall over – sorry, levolve – and then it was over. It was impossible to tell who was winning, and the futility of modern warfare briefly washed over me like dishwater from the washing-up bowl of eternity.

But as you’re here, why not watch some of the various videos shot by YouTube names at a recent EA event in Guildford? Between them, you’ll get a good idea of how four of Battlefield 3’s best-remembered maps have been rekitted for inclusion in Battlefield 4’s Second Assault DLC.

Here’s your lot, complied by MP1st and spotted by VG247. At least some of the footage comes from the Xbox One, but that’s probably okay – it’s a machine that does a passable impersonation of a PC.

First up is Operation Metro, captured by LevelCapGaming, which now features a collapsible pile of baguettes in a chokepoint patisserie.

Next is jackfrags’ look at Caspian Border, in which we’re told the ship of Prince Caspian himself, the Dawn Treader, can be seen crashing into a hitherto unseen shore.

And finally, here’s jackfrags again, pottering about the newly revamped Gulf of Oman. Early reports suggest that a ravine opens up midway through the match, swallowing up every last player like that bit with the stadium in the last Batman.

Alright: I may have lied, about key details, in every single case. But it is true that four of Battlefield’s most-beloved maps have been rejigged to take advantage of Battlefield 4’s levelution features. That’s a good thing, right?

Second Assault’s PC release is at least a month away, thanks to a timed exclusivity deal for the Xbox One. It’ll also reintroduce dune buggies and Capture the Flag.