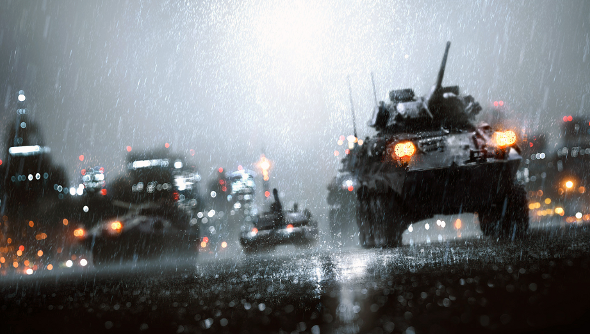 When I’m shooting people online, and the map is dappled with sunlight and surrounded by clear blue skies, I feel ill at ease. Living in Scotland, I’ve not seen “nice weather” since the mid ’90s, so I simply don’t know how to react. But what if I could change the in-game weather to match the miserable, wet reality outside my window?

DICE CEO Patrick Soderlund, speaking with The Guardian, has been wondering the same thing. “[W]hat if we had servers where it pulls in just things as simple as weather and day time from the local area.” Finally, a way to fight my fellow Scots in a climate we understand.

Soderlund continues, “If the server is in Stockholm and it’s sunny, what if the map is sunny, too? What if it’s snowing and dark in Moscow? Okay, let’s have the servers there playing snowy and dark maps. You look at the possibilities and realise you can do so many more things in the cloud-enabled world than we couldn’t do before. That’s frankly one dumb idea from me, but it’s kind of cool!”

It’s not necessarily something that DICE will actually implement in Battlefield 4, but it’s an example of the experimental stuff DICE can consider now that the game’s released.