Did you know we were at war? With crime? Over these seven minutes of Hardline footage, EA are at pains to point out that a change of uniform doesn’t mean Battlefield is leaving its military hardware behind: the cops are carrying, to say the least, and so are the robbers.

More or less everything else has changed, though. In multiplayer, expect ziplines and grappling hooks applicable to “any map, anywhere”, and car chases across “huge open environments. In single player, a cop show-inspired campaign to be played “multiple times in multiple ways”, and built from environments “wider and more open than ever before”.

We’ll play Nick Mendoza, a young Miami detective “caught up in his own personal struggle” between his inner cop and crim.

As Nick, we’ll embark on a cross-country quest to exact revenge on formerly-trusted partners in the force. The rest of the cast sound similarly wonky – a “rogue gallery” of crooked cops and deranged billionaires.

If Hardlines owes its premise to The Departed, though, it pulls its structure (and its actors, sourced from Justified and House of Cards) from the telly. The campaign “draws influence from popular television cop dramas” – each level is an episode, “cliffhangers and all”.

The US-set environments Mendoza fights through are “modern, sexy, and of course highly destructible”. They’re also designed to be replayed, and open to at least three distinct playstyles: guns blazing, sneakery, or sniping from afar.

Oo! And we’ll have a police scanner, used for clue-searching and unveiling a “second layer” to the story, as well as for bounty-hunting nearby NPCs.

Vehicles will feature in both single and multiplayer, include “muscle cars”, and encourage “roadkill”. 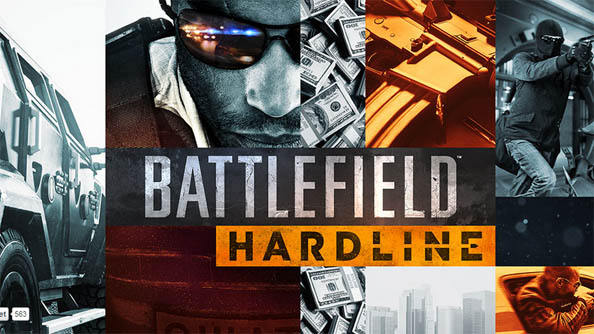 Hardline’s multiplayer modes are built with “tactical coordination” in mind.

“There has never been a greater need for the teamwork and tactical gameplay that Battlefield fans expect,” say EA.

Ziplines and grappling hooks can be used willy nilly – though presumably not in Hotwire mode, which has “cops chasing car thieves across huge open environments”. There, “players have to think fast and drive even faster”.

Elsewhere, we’ll organise hostage extraction as SWAT in Rescue mode; play a more traditional remix of Capture the Flag in Blood Money, which sees cops and cons fight over big stacks of cash; and stage “elaborate” bank jobs in Heist mode, while other players block escape on the roads outside.

The idea that cops might be interchangeable for soldiers is an odd one to swallow in the UK, where the law’s weapon of choice is a quiet chat, or a tickle with a taser if you’ve been particularly naughty.

But given its repeated use over seven minutes of Battlefield Hardline footage, it’s fair to assume that warfare is still the word – despite a relocation to the peacetime streets of the US. Are you ready to wage war on, er, crime?