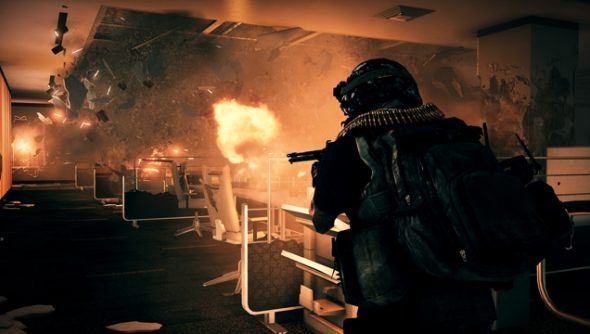 The Battlefield 3 blog’s getting all gabby about the systems powering thee next expansion pack, Close Quarters. As the name so sleekly suggests, the expansion pares down the big fights into smaller, personal battles.

But taking the fight from the fields to buildings is a huge technical challenge.”One important aim for me with Close Quarters is to let players generate ambient environmental chao”, says Nadab Göksu, Senior VFX Artist at DICE. “All HD Destruction leaves behind a big and very long-lived dust particle cloud that shows the trace of war and turns the surrounding dusty.”
But if you already have destruction in the game, why change it at all? I love this: Battlfield’s destruction is too big and dusty for the expansion’s corridor: they hand around too long, so the aim of the VFX dept is to make it big, impressive and to dissapate.
A challenge when you consider quite how destructible the world is.Nadab explains: “On the ‘Skybar’ level [our internal title for Ziba Tower] for example, you have the sprinklers that will trigger if someone shoots at them or if an explosion goes off nearby. We also have gas stoves that burst into flames during the entire round. Showers start to leak water and steam, TV’s are buzzing with static, lights are flashing, and so on. The experience I want to convey is that you generate the chaos, and you can track were the action is by following the signs of destruction. Put simply, at the end of a round, a Close Quarters map should look and feel completely different from when the round started.”
They have visual proof of that.

I’m a pathetic sucker for explosive physics, so seeing the rooms explode as they do is frighteningly exciting. An ever changing level that the players carve with bullets. It’s like a violent Minecraft, or shooting a bullet into plastescine. I should stop interrrupting the technical talk with my inane drivel. Here’s more big words from Nadab.“Basically, all impact effects from bullets in Close Quarters are new. They are also rapid, more violent and contain a lot more debris than earlier. Every bullet fired will now spawn ~50 particles upon impact, from the previous ~10. How can we afford this from a performance standpoint? That’s where our optimization work comes into play, making sure that all the extra debris will only spawn if it’s close you to, with a cap on how much debris can exist in the world at any one time.”
Oh boy.
{"schema":{"page":{"content":{"headline":"DICE: “At the end of a round, a Close Quarters map should look and feel completely different from when the round started.”","type":"news","category":"battlefield-3"},"user":{"loginstatus":false},"game":{"publisher":"Electronic Arts","genre":"","title":"Battlefield 3","genres":[]}}}}