Six months after its release for general sale, Battlefield 4 remains a bug-ridden, broken game. Despite repeated patches from DICE and EA, the moment one problem disappears another six seem to make an appearance.

Fed up with Battlefield’s crimes, the FBI haul it into custody and place the game on trail. This is the thrilling courtroom drama that results from such arrest.

The trail will be overseen by Judge Reinhold. Representing the players and purchasers of Battlefield 4 is District Attorney Ernest Arthur Suchs. Battlefield 4 has been assigned a Public Defender in the guise of PCGN writer Matt Purslow. You – the jury – have been sworn in, and the case is about to begin. 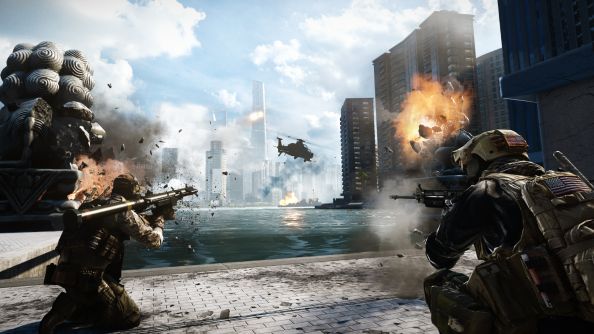 E.A Suchs: Your Honor, Ladies and Gentlemen of the Jury, the defendant is charged with being an incompetent product. Its crimes are numerous: sound cut-outs, server crashes, queueing problems, and rubber banding. It even has the audacity to continue committing offences; only this week was the defendant discovered creating impenetrable barriers over dead player corpses. Simply put, Battlefield 4 is a fraudulent promise. It’s an incomplete game that has never worked, and probably never will. It should be locked away on a life-time sentence and all players should be given a full refund.

M. Purslow: Your Honor, the Jury, Mr. Suchs is demanding punishments far and above the crime. I believe that despite its missteps, Battlefield 4 has been a valuable member of the gaming community.

E.A. Suchs: Objection! How can you possibly have come to such a conclusion? By DICE’s own admission, the servers can’t even cope with the demands put on them!

M. Purslow: It’s true that some servers have difficulties, but for the majority of my sixty hours with Battlefield 4 I’ve witnessed fewer performance issues than many reports would lead you to believe. Since launch I’ve almost exclusively played on 64-player maps, and found them to be chaos-promoting death arenas of the very best kind. Lets take a moment to look at Mr. Field’s best qualities, rather than daming him for a few marks on his permanent record.

Battlefield 4 is a true team player. Never before in the history of the Battlefield family has there been a Battlefield this dedicated to playing as a close-knit team. Field Upgrades is a new feature, granting buffs and bonuses to players as rewards for good team play. Follow a squad command, resurrect a team-mate, repair a vehicle with a squaddie inside: all these actions build the Field Upgrades meter, resulting in better armour, more bullets, automatic repairs, or cloaking from radars. Genuinely useful and desirable abilities that bring squads together in order to achieve them. And Battlefield encourages people to stay together by deducting Field Upgrade points for letting your squad down. This is a game committed to bringing people together. Isn’t that an admirable quality, especially since its peers are forever promoting the egotistic self in the form of solo killstreaks?

E.A. Suchs: Objection! You’re just assuming people will make use of such a feature. And I hardly think some good spirited community work can excuse it from a list of crimes as long as my leg. 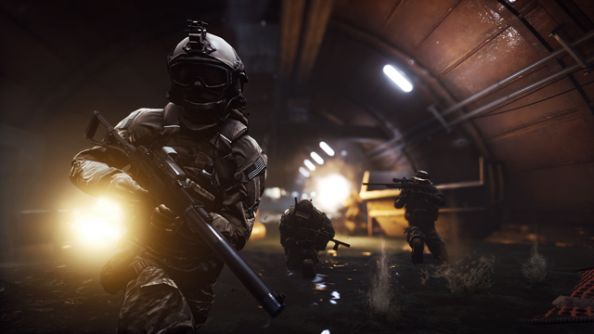 M. Purslow: Certainly your Honor. Battlefield 4 has offered players the most customisable soldier roles in the history of the series. Prior generations have pigeon-holed players into a handful of jobs, and whilst it is true that Battlefield 4 has only four class options, these roles have never been more versatile. Take the Recon role for example. Traditionally a sniper’s position, anyone who was unable to used a scoped rifle with precision was unable to advance this class to its highest rank. But Battlefield 4 allows multiple play styles in each class. Now you can play Recon as a close-combat, shotgun-wielding soldier from almost the very start of the game. You can assign it a Field Upgrade path that promotes stealth and enemy identification rather than tricky long-range kills. You can even act as a sneaky tank hunter with the class, thanks to unlockable C4.

E.A. Suchs: Isn’t tank destruction the job of the Engineer?

M. Purslow: Traditionally yes. But now Recon and Support classes can use C4, they can act as the anti-ground units of a squad, freeing up the Engineer to be an anti-air unit. Helicopters continue to be one of the most vicious killing machines in the game, and now one member of a squad can be prepared for them at all times without sacrificing diversity.

This game also thankfully does away with its predecessor’s horrendous upgrades path and replaces it with something logical. Unlocks are based on weapon types, so if you enjoy using assault rifles you need only to keep using them to unlock a new one. With weapons like carbines that can be used across multiple classes this allows quick progression without being forced to play a specific role. You can now decide what to work towards, rather than the game deciding for you. A true victory in player choice, surely? 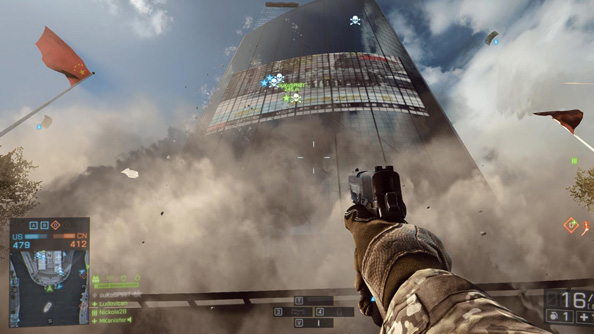 I’d also like to point out that Levelution – whilst a crime against the English language – is a real triumph for DICE. Take Flood Zone for instance; a map which transforms from tank-friendly streets to canals only passable by boat with the destruction of a dam. It rewrites the way the map must be utilised, forcing people to base jump between rooftops, and turning what were shortcuts just two minutes ago into shooting galleries.

I suggest if you want to test out just how well these features have been implemented, go now to your internet browser and load up Battlelog. Choose a server and join. It really won’t be the impossibility countless news stories and forums would lead you to believe. And you’ll have fun. You can level a skyscraper and kill everyone inside it. You can destroy an M-COM station and for just a few moments be hailed as the hero of the server. You can fly a reconnaissance drone into the face of a killstreaking sniper and free your squad from being pinned down. All glorious moments. And yes, I can’t deny that I’ve been disconnected from games, been killed numerous times thanks to lag, and played matches that lost sound for minutes at a time. Battlefield does need to answer for these crimes. But let us not damn it entirely, when at its heart it is genuinely one of the most entertaining, well designed shooters for a good few years. I believe the jury should find the defendant not guilty of incompetence, although a lesser sentence for flaws would be satisfactory.

E.A. Suchs: A desperate defence. Battlefield 4 may be as well designed as you claim, but it is not well crafted. I think we should be pushing for the death penalty, clearly a life sentence is too lenient for a game that’s offered naught but empty promises since its birth.

Judge Reinhold: Such decision is not yours to make, Mr. Suchs. The jury – the good readers of PCGamesN – must be the ones to determine Battlefield 4’s fate.

Will the jury please raise their hands to their keyboards and type their decision into the comments box beneath this article.