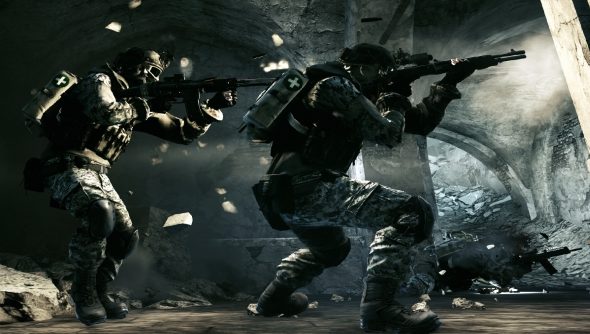 Are DICE about to launch “Battlefield Premium”? That’s the claim from a “reliable” source to Battlefield fansite, Battlefieldo. Battlefield 3 already has comprehensive stat tracking and clan management, so what else is there for Electronic Arts and DICE to tempt the fans into subscribing to?

According to the leak, the first dollop of Premium content for Battlefield will include: “one-of-a-kind Premium knife and black dog tag, plus a set of soldier camos, weapon camos, dog tags and Assignments that will make sure you stand out and get more personalization options.” So weapons, vanity items and assignments, the sort of pre-order frippery that attracts attention but has little value to the long-term enjoyment of the game. Baubles. If that’s all there is, then there’s little threat to Call of Duty: Elite. What else could they provide? A lot, as it happens.

What about DLC? Elite offers monthly map packs to paying members, the value there is everyone else has to spend to get them: for £35 a year, you get all the packs and get to keep them after the sub has run out. While BF3’s content drops aren’t as pacily developed, there’s a value in being able to tell those that pay or subscribe that they’ll have access to past and future DLC releases. As long a they don’t make things like maps exclusive: splitting the community into map-pack owners vs non-buyers is already a difficult business to support, never mind if it was further sub-divided.

I’d expect some focus on tournaments and leagues within the paying community to eventually be folded in as well. Nothing gives a game’s community’s competitive scene a boost more than the developer actively participating in and running the tournaments. In a game as seriously warfacey as Battlefield 3, it would make sense for there to be a continual, official presence in the running of the tournaments. DICE approved or managed leagues with regular, scheduled games and seasons, would probably elevate Battlefield 3: it would certainly keep bring people back. One controversial aspect of Battlefield 3 is just how tightly EA and DICE control the servers: there’s no dedicated software for you to run your own: you have to rent official boxes from approved suppliers. It’s a move that would only attract the most dedicated fan, so there’s an argument for bringing it into a Premium Battlefield service: only dedicated fans are likely to sign up to the scheme. I’m actually pretty sure this is something that would happen on a tiered basis: ie: silver premium gets you maps and sparklies, gold premium adds server access, platinum premium is everything there and you get cake.

The icing on that cake could be on-going access to developing features: maps, weapons, vehicles. Not stuff that you use, but votes, suggestions, community involvement taken to a deeper level. I actually don’t mind the notion that the elite, as it were, players are asked to give an opinion that the developers take into account: if you’re paying for the game beyond paying for it initially, you have passion. Why not tap into it a bit and give them the sort of welcome, we listen to you attitude that they’d probably appreciate. Admittedly it sounds a little like a plane stewardess thanking the people in First-Class for simply being there, but letting them drive the game a little, or at least suggest the direction, is probably a feature that would drive subs.