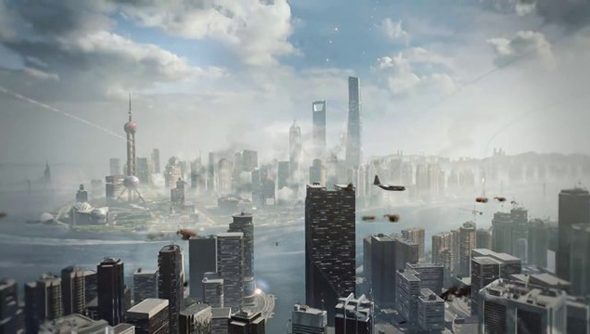 Battlefield 4’s beta goes open on Friday, and the whole world will play silly buggers with helicopters in Shanghai until the big building falls down and everybody gets in serious trouble.

But if you’ve either a) found the tarot card in your breast pocket that signifies Chosen status, b) slept with a DICE executive, or c) paid money for a related thing from EA, you might have earned a spot in the brief closed beta that begins in less than 24 hours. Read on for more on that.

If you’re a Battlefield 3 Premium member, you’ve a place waiting for you in tomorrow’s beta. If during a low point in Autumn 2012 you bought and registered a Limited or Digital Deluxe copy of Medal of Honor: Warfighter, then here’s your long-awaited consolation prize: a place in tomorrow’s beta. And if you’ve pre-ordered Battlefield 4, then guess what: there’s a folded piece of cardboard with your name on it waiting in tomorrow’s beta.

Preloading opened on Origin at 6pm BST / 10am PDT yesterday evening – but I suppose it might still make sense to preorder a copy of the game about now if you’ve a spare three days to take advantage of it.

On a technical note, you’ll need to be running a 64-bit OS to take part – though the final game will also run on 32-bit as you’d hope. And we’ve previously listed Battlefield 4 PC system requirements for your perusal – they’re not a huge leap beyond the series’ last iteration.

DICE say that the beta’s Siege of Shanghai map is “perhaps our most ambitious and ‘Battlefield-y’ map ever”.

“Never before have we combined a dense urban environment with full infantry and vehicular combat,” they write, channelling Churchill. “You’ll zigzag between the skyscrapers in helicopters or engage enemies right in the center of the city in our all-new attack boats.

“We’re also including the entire concept of Levolution, from the epic player-triggered moment where you can bring down an entire skyscraper, to all of the little things like raising bollards to stop advancing armor, car alarms going off, and being able to lower shutter gates to fortify your position.”

See some of that happening below:

Are you keen to join DICE’s levelución?