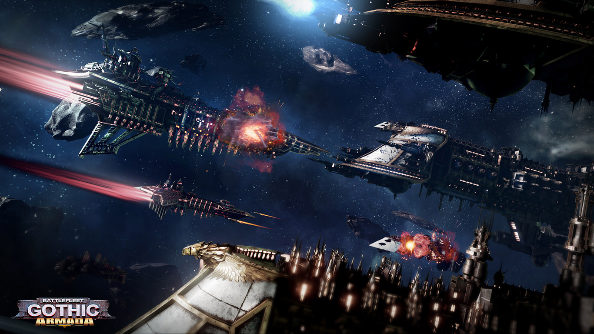 Battlefleet Gothic is the naval combat side of the Warhammer 40,000 universe. It’s not around in tabletop form these days, but it’s coming to PC in the form of a RTS that pitts massive, ornately-decorated battleships against each other in the depths of space. This new gameplay trailer for the game shows off all the basics.

Armada’s ships – some of which can be 8km long – are made up of sections that can be individually damaged. Thus the game’s all about tactically firing on the enemy. If they’ve got a big scary set of broadside cannons, you don’t have to destroy the whole ship to eliminate that threat: just focus on the cannons, destroy them, and the enemy won’t be able to use that skill.

Of course, this works both ways, so if you’re favourite weapon is destroyed on one of your ships, you’ll have to warp them out for a few minutes and get them repaired.

The game features Imperial, Chaos, Eldar, and Ork fleets, although this trailer only shows off the Imperial and Chaos ships. They are heavily detailed, and the Unreal 4 engine seems to be doing a good job of recreating the grotesquely ornate feel of the 40k world.

The campaign will see you take command of the Imperial navy and launch an attack on Chaos’ big bad Abaddon the Despoiler, who just happens to have ownership of a ship that can obliterate entire planets.