I’ve borne witness to a vast amount of space battles lately, from the dogfights of Elite: Dangerous to the fleet engagements of Master of Orion, but nothing compares to the sight of a poorly cobbled together pile of polluting space junk gleefully ramming a corrupted, gothic frigate which, by the way, had been blessed by a dark god.

If duking it out in space is your thing, check out our list of the best space games on PC.

Such clashes are par for the course in Battlefleet Gothic: Armada, where the factions of the Warhammer 40K universe duke it out in space, aboard gorgeous and ridiculous ships. The combination of Orks and spaceships is obviously one of the greatest marriages ever, which is why I found myself commanding a wee fleet of Greenskins against an armada of Chaos nutters.

It did not go well at all. 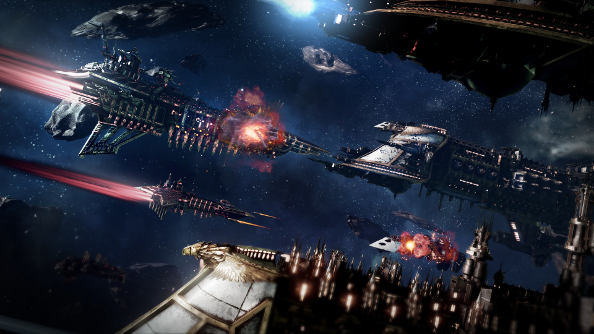 You can tell a great deal about the 40K factions from their ships. The vessels of the Imperium are like giant guns with towering gothic cathedrals slapped onto them. They are as imposing as they are delightfully absurd. These are ships that you look at and just know that zealous space racists would totally fly about in them. And the Chaos ships, well they look like the type of spaceships that would have libraries – I’m assuming that all ships come with libraries as standard – full of Lovecraft.

Ork ships look like they’re made of trash. Nobody that wasn’t suicidally brave or terminally stupid would get inside one. They’re like the sort of thing you’d expect to see in Junkyard Wars, but full of rocket fuel and presumably drunk, war-mad Orks. Who wouldn’t want to be their admiral?

Though Battlefleet Gothic: Armada is an RTS, it still takes some cues from its tabletop predecessor. Battles take place on a two-dimensional arena, littered with obstacles like mines and gas clouds that make up for the lack of terrain, and the opposing fleets warp in at opposite ends of what is basically a big star-filled table. 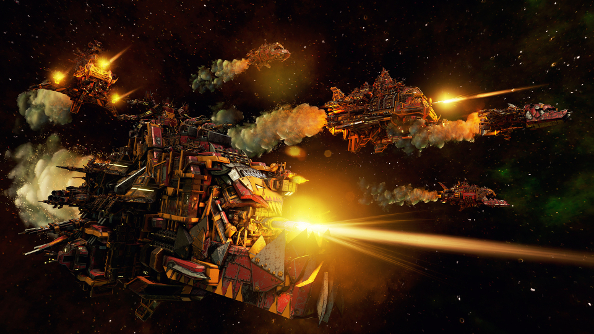 My Ork armada is admittedly not incredibly impressive. While fleets can level up, gaining new skills, crews, different bonuses from deities and more ships, I have to start out with a little baby fleet of only a couple of light frigates and an escort vessel. They do look sort of imposing though. I stuff them full of burly warriors who don’t mind being launched at spaceships and lots of missiles, just to be on the safe side.

Ahead of my fleet, little red orbs appear, pulsing out in space. They look like weird anomalies, but are in fact the Chaos ships. Unless they’re obscured by something like a gas cloud, traces of enemy ships are always visible, but just their position. Without sending out probes, it’s impossible to see what the ships actually are until they’re closer. That doesn’t take long this time, though; Chaos are fast.

Orks are not fast. I fire off missiles from both of my light frigates, which speed off into the void, hitting absolutely nothing. The spry Chaos ships deftly avoid them and don’t stop moving. Smaller and more nimble, they dart in and out of sensor range, sometimes circling, chipping away at my shields. 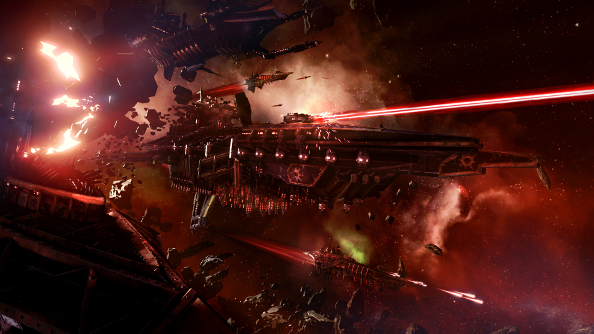 A Chaos frigate comes round for another pass, and that’s when the big red button gets pressed. This is the ramming button. It is a terribly stupid thing to put on a spaceship made out of rubbish, and immensely satisfying to use. My rickety frigate fires off, as fast as its smoke-spewing engines can push it, hurtling through space until it collides with the Chaos ship and then peels away as if nothing had happened.

Ramming stuff is, of course, eternally entertaining, but it’s actually a bit tricky to bash into extremely fast vessels powered by blood and black magic and unpleasant dark gods. Orks aren’t one trick monsters, though. On one of my frigates, I had a compliment of eager warriors waiting to be shot at enemy ships, the quick and dangerous version of boarding.

Once a ship’s shields and armour are gone, they’re done, but battles aren’t just about whittling away those two bars. Crews, engines, weapons – these are all separate components that make up a ship, and taking them out goes a long way to removing it from the battle entirely. Furious Ork warriors, then, are a handy thing to have. Murdering some crew and aiming at the engines knocks the wind out of some of the Chaos ships, letting me once again hit that big red button and punch a ship with another ship. 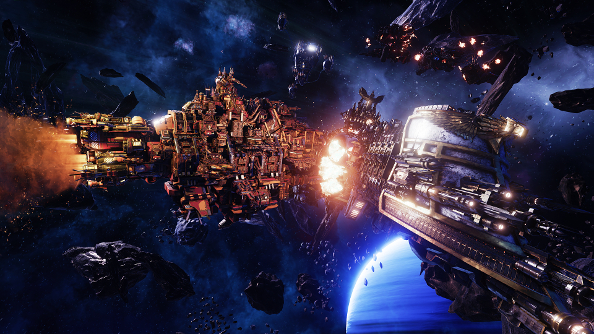 Like you might expect from an Ork Admiral, my attention is slightly diverted by the joy of smashing ships, and I don’t notice my own dwindling shields and armour. As fun as ramming is, it’s even better when you disable the cannons constantly firing at your massive ship as it blindly charges forward. It’s a bit too late for that lesson, lamentably, and my once loyal Orks are starting to grumble.

Ships only move, attack and stay in the battle while their AI captain is happy, when morale is up and victory looks possible. As another Chaos broadside attack pummels my almost-done-for escort vessel, it’s clear that none of those things are true. There are crew members that can be unlocked and attached to ships that reduce insubordination and even let you execute unruly captains, but none of them are hanging out on my ships. And that’s why I’m watching as one of my frigates warps out of the battlefield, leaving only one ship left. Thanks, traitor.

As my final ship takes a hammering but stalwartly refuses to give up, I see where I went wrong. Not being good at the whole admiral thing, certainly. Letting lots of Orks die as I repeatedly launched my ships into other ships, sure. But also not taking advantage of some helpful automation. You can tell ships what and when to fire, when to escape, if they should move in for a broadside attack automatically – they’re optional but make it easier to control multiple space duels and manage up to around seven ships of the line.

When you’re trying to line one ship up for a ramming manoeuvre, another so it can launch some missiles and take out an enemy broadside, stop a captain from fleeing and get a couple of frigates positioned for a broadside attack, you’ll appreciate a bit of automation. 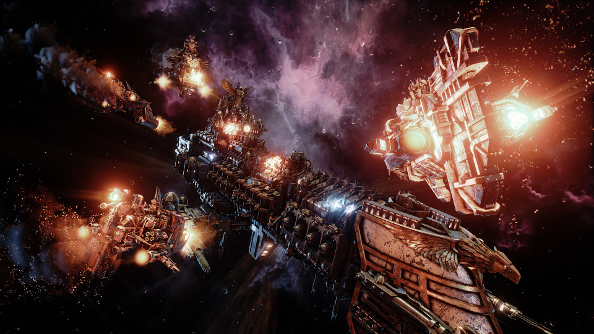 The battlefield itself can be taken advantage of, too. Ships can skulk in gas clouds, hidden until they spot a perfect opening, or overly zealous captains can be tricked into flying right into a minefield. My mistake was excitedly charging toward the first red glow I spotted instead of cautiously investigating the enemy fleet’s makeup, hiding until I was ready to fight.

At last, my sole spacecraft blows up. Luckily, Captain Traitor and his ship actually survive the battle, and so they level up. There’s good reason to risk warping out, though in this case the decision was taken out of my hands. It is a risk, though, as ships can get lost in the warp. I’m a bit torn about giving the guy that ran from a fight a new skill or handy new crewmember – my eye’s on the gunner – like a reward. But since my other ships were defeated, choices aren’t abundant.

This battle probably isn’t going feature in any epic Ork saga, but I’ve been told that the Orks do sing some space shanties, though, and I think that my dismal defeat at the hands of Chaos has the right stuff for a tragic yet comical shanty with an important message about ship safety and the chain of command.

Battlefleet Gothic: Armada is due out this month.