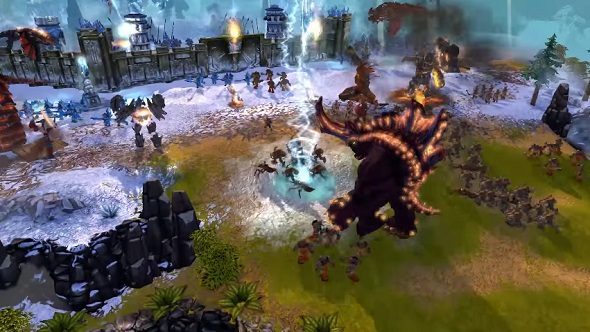 In a post on the BattleForge Reborn forum, community manager MrXLink has announced that EA has apparently permitted a fan revival of BattleForge, under the new name of Skylords Reborn. According to this post, EA has officially sanctioned this revival, with the help of a company named Ardent Peak. This new edition will bring the game up to the same standard it was at before the servers were shut off in 2013, while potentially adding new content in the future.

Gather your armies and try out these other top notch PC strategy games.

Originally developed by EA Phenomic and released in 2009, BattleForge was a freemium RTS where players would build armies not by gathering resources, but by collecting and trading cards with other players. Cards were divided into frost, shadow, fire and nature, with players having to use special BattleForge points to get more cards. As the original BattleForge was released just as microtransactions were starting to take root in games, this involved popping down major moolah to make a decent army.

The Skylords Reborn team promise that the game will never “Pay2Win or Pay2Play”, stripping out all microtransactions and upping the amount of BattleForge points players make through regular play. It will be run via a brand new custom server, run by Ardent Peak. The Skylords Reborn team have been given permission to alter the original BattleForge client, mainly to edit out all references to EA, according to the post from MrXLink. While the development team are allowed to “alter the server in such a way to release additional content”, they are not allowed to “release any paid DLC or paid updates for the game.” As the project’s main goal was to revive the original BattleForge, this does not seem to be a huge problem but it does limit the creative freedom of the Skylords Reborn team, once they finish the job of restoring the game to its pre-server shutdown state.

However, the developers are allowed to “commercialise the game to the extent that we are allowed to gain money for the project”, so it is currently unclear exactly what the team can do to continue funding of the project, besides taking community donations.

If you are a lapsed BattleForge player or someone who has never heard of the original but are interested in its hybrid of collectible card game and RTS mechanics, it’s definitely one to watch as the project develops. Skylords Reborn will be a fresh start for everyone, so no worries about some veteran tactician having all the best cards upon launch.

There has been no word directly from EA which confirms their sanctioning of this fan revival, so maybe wait for an official statement before firing into those BattleForge tutorials.