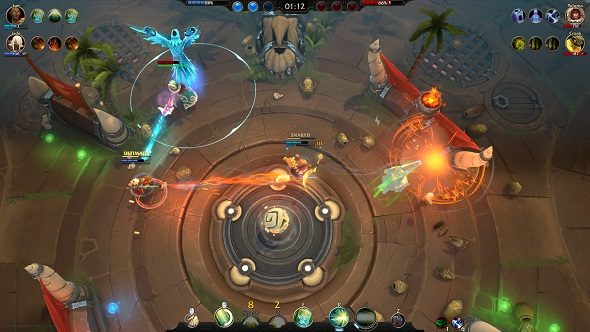 Hoping to bring new blood into the colosseum, Stunlock Studios have announced that Battlerite will be free to try until April 16. During this week, all of Battlerite’s 20 heroes and eight maps will be available to play, with brawlers being able to level up characters and unlock various skins and cosmetics during this period.

For those on a budget, you must check out our list of the best free PC games.

If you choose to buy Battlerite following this free week, all of your progress will carry over to the full version, including any unlocked skins. Moreover, anyone who purchases Battlerite during its early access period will get any future characters free of charge.

Described as the combination of “a top-down shooter [and] a fast-paced fighting game”, Battlerite focuses solely on teamfights, cutting out much of the fluff found in traditional MOBAs. With no minions, no buying items and no laning phase to worry about, Battlerite’s combat is like a MOBA in its crystalline form, as success in battle is all about landing skillshots, synergizing character abilities and working together as a unit. So far, it has garnered a small but dedicated following, with this free week potentially enticing more players into joining the brawl for good.

Along with the free week, Battlerite has received its first ever holiday game mode. Running until April 18, Bakko’s Egg Brawl has all players fighting as the shieldbearer Bakko, hunting around the arena for magic eggs to fling full force at your opponent. Each egg has a special effect, meaning teams must work together to score the most eggcellent combo on their enemies. Stunlock have also announced that any players who log into Battlerite before April 18 will gain access to a special Golden Rooster mount.