Earlier this month, Stunlock Studios announced Battlerite Royale, a new battle royale mode for their fast-paced, pared-down MOBA. Out later this summer, the new mode pits up to 20 players (in solo and duos) together on an expanded map, with the last player(s) standing declared the victors.

If you’ve paid any attention to the world of PC gaming over the past year or so, Battlerite Royale will be pretty recognisable – players drop into an island, scrabble for supplies, and are forced closer together over time by a shrinking circle.

Battlerite is a speedy, top-down twist on the formula established by Dota 2 and League of Legends, but which is the best MOBA?

Battlerite has, admittedly, made a slightly smaller splash than Fortnite and PlayerUnknown’s Battlegrounds, which might make it easy to ignore, but the same can be said about pretty much any other game in existence. If you fancy giving it a chance, then, consider getting some practice in ahead of the release of the new mode by checking out our list of the best Battlerite champions.

With the new mode due out this summer, we spoke to marketing director Johan Ilves about the inspiration behind the adaptation, the battle royale genre as a whole, and what gaming’s hottest trend could do for Battlerite in the long-term.

PCGN: Many of the games that have been turned into a battle royale have

been shooters – what inspired the decision to adapt a MOBA for the mode?

Johan Ilves: In some ways, Battlerite is a top-down shooter, with most of the Champion abilities in the game being skillshots. In the early days of development and before the new wave of survival games, ‘battle royale’ was already a keyword for us in marketing. There are already core elements of a battle royale game mode that exist in the original Arena mode today such as elimination and the Death Vortex.” Scaling up this experience was something that came naturally to the team while also remaining true to Battlerite’s core gameplay.

There are no top-down battle royale action games with MOBA elements on the PC market today, and with more than eight years of experience working with top-down games, we believe this formula is a perfect match for us.

How far do you think battle royale can go? Can most genres be adapted for it, or is it a limited pool?

JI: We see it as creating an alternative way to enjoy Battlerite. All game developers wish that their next big project will take off, and in that way we’re no different – it has always been our goal.

I think we’ve only seen the tip of the iceberg of what can be done within the battle royale genre and I believe we will see it evolve into new forms and be adapted in ways we never could think of. Battlerite Royale might become the start of a new evolution of the genre, it definitely stands out compared to what’s out there today. 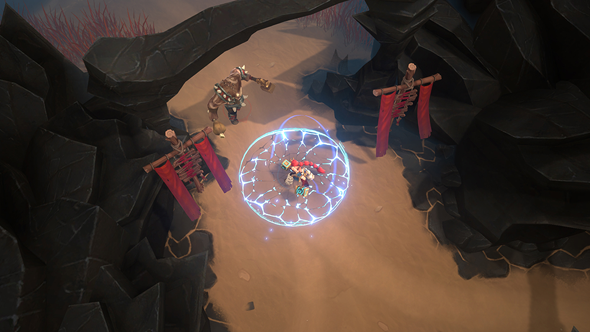 Battlerite already relies on having an enclosed, shrinking player space – how does Battlerite Royale change that formula?

JI: It’s essentially the same, but on a larger scale. Players will have to take into account the landscape in order to avoid being trapped and mounts will have a greater role in escaping the Death Vortex.

How have the basics of Battlerite had to change to the battle royale mode?

JI: We have worked on adapting the game mode from the Arena playstyle, although there are major differences. For example, making good use of consumables will help you get the advantage needed to tackle unfavourable situations.

Supports are currently available to play in both free-for-all and duo. We worked on a system to balance individual Champions for Battlerite Royale and our Champions are already designed to be able to stand and fight on their own, regardless of the role. The mode will overall require more strategic thinking to make sure you survive on the island and different Champions will require different strategies. We are still in alpha so just keep in mind things can change down the road.

Has the creation of a larger map pushed you in any new directions regarding Battlerite’s lore or environmental storytelling?

JI: Our first game, Bloodline Champions, is played out in the same world as Battlerite and actually had plenty of lore. Unfortunately, we haven’t had the chance to package and showcase much of Battlerite’s lore, but it’s important for us and we are constantly working with the stories behind Champions and the world. A big map outside the Arena definitely opens up the chance for additional lore and we are now working with a professional lore writer to be able to share more stories moving forward in 2018.

Are you planning to introduce more game modes over time, or will you be focusing on the standard mode and Battlerite Royale for the foreseeable future?

JI: Battlerite Royale gives the team a lot of new options when it comes to creating gameplay and a new kind of battlefield to explore and evolve. It will definitely keep us busy for the upcoming months in addition to working on new Arena updates. 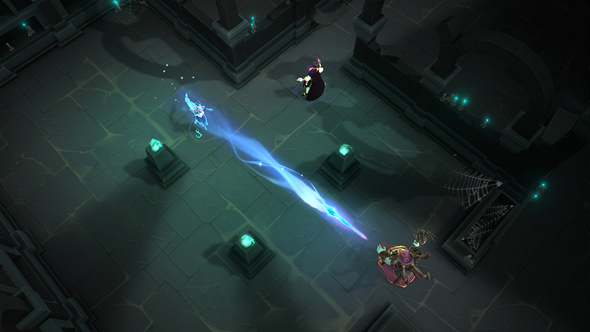 Do you worry that Battlerite Royale will become bigger than the original game, as is the case with Fortnite and Fortnite Battle Royale?

JI: It wouldn’t surprise me if Battlerite Royale becomes bigger than the standard Arena mode, and if that happens, I believe we will see the total amount of players rise in Arena as well. Battlerite is known to be a very competitive game and the competitive scene will most likely stay focused around Arena, while Battlerite Royale could work as a great gateway. We are not making any compromises for either of the modes and want them both to fulfill their purpose without interfering with each other.

Battlerite Royale will definitely attract new kinds of players and we see this as the next big step to grow the game.