Harmony Gold are TV producers (and real estate developers, for some reason) based in Los Angeles. They also own the copyright to Robotech, a mecha anime series that’s visually similar to BattleTech, a rival mecha IP. Accordingly, Harmony Gold are suing the developers of the forthcoming BattleTech videogame for copyright infringement.

Looks like you may have to wait for BattleTech – why not try some of the best strategy games on PC in the meanwhile?

Harmony Gold’s court filing is dated March 1, 2017, but has only just been spotted by the BattleTech community. They are suing Piranha Games, the current BattleTech rights-holders; Harebrained Schemes, the developers of the new videogame; and Jordan Weisman, one of the designers of the original BattleTech board game, who is also working on the videogame. Comprehensive.

The story of these rival franchises is complicated, but here’s the short version: There were three related Japanese mecha animes in the early 1980s, of which the American Robotech series was an explicit, licensed adaptation. That licensing deal went through before BattleTech began in the form of a 1984 board game.

To the extent that BattleTech involves giant battling mechs and clearly came out after Robotech’s source material, it’s an imitation. But just how far BattleTech’s spin on the concept infringes on Harmony Gold’s IP has been a bone of contention since at least the 1990s, when the Robotech owners first sued the BattleTech ones. Give it a thousand years and they’ll probably still be fighting it out, except with actual mechs.

Here are a couple of comparison images to illustrate Harmony Gold’s complaint, grabbed from the court filing. You can find more over onGamePressure. 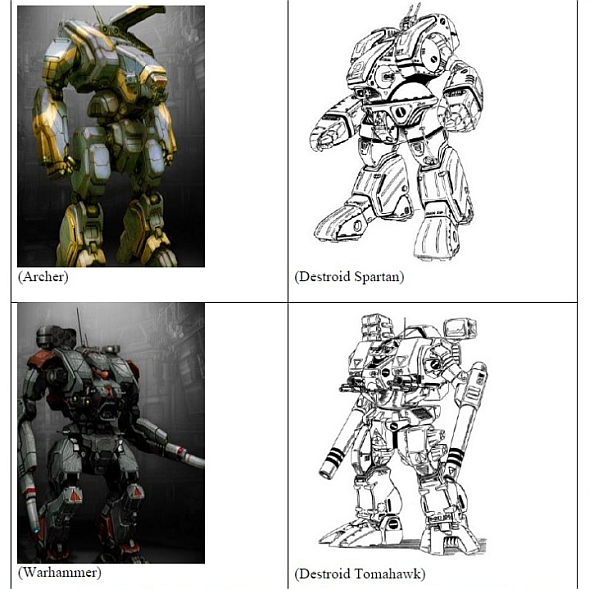 Even if Harmony Gold have a point, the lawsuit still sticks in the craw from a consumer perspective. As one commenter in the BattleTech forums put it: “it’s not like [they’re] doing anything with the Robotech IP anyway.”

BattleTech is on Steam hereandprojected to release sometime this year (in light of current story: heh). Ben and I streamed it last month, and rather enjoyed ourselves – here’s hoping the lawsuit is resolved quickly.