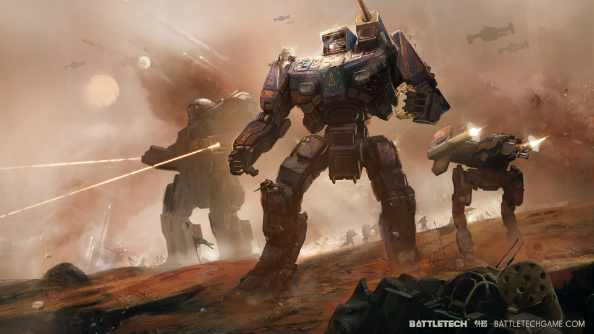 Battletech just made Kickstarter look really, really easy. 24 hours into Harebrained Schemes’ campaign to crowdfund a new turn-based mech combat game, they’ve already gained over 12,000 backers and raised over $850,000 – well over the initial $250,000 target. Let me be the first to say that I, for one, welcome our new robot overlords.

– $250,000 – Combined Arms: We’ll add a healthy roster of non-‘Mech AI opponents to the Base Skirmish Game including tanks, hovercraft, support vehicles and more. But be careful – even the lightest of combat vehicles can still wreck your ‘Mechs under the right conditions.

– $400,000 – Expanded Mission Objectives: We’ll add a variety of mission types to the Base Skirmish Game including Escort, Capture, Defend, and more.

– $500,000 – Expanded Environments: We’ll add a wider variety of battlefield environments to the game, including time-of-day and atmospheric conditions that affect both movement and combat. Confront enemy forces in the low-visibility conditions of a blizzard on a frigid ice world, or carefully manage your heat in a battle across volcanic fields.

It’s well on the way towards its final $2.5 million stretch goal in its first day – not quite matching Shenmue 3’s unbelievable $2m raised in 24 hours, but pretty damn impressive nontheless.

There are two funding stages to the solo campaign – the higher stage expands it to make your experience more open-ended. Currently the Kickstarter has yet to hit either of the single player funding targets – $1 million and $1.85 million respectively – but then, it’s only been a day. The campaign runs until 3 November, and looks very likely to hit both those targets.

If Battletech raises $2.5 million, Harebrained Schemes will also include PvP multiplayer. There’ll be both ranked and unranked combat available.

Have you donated any funds to the project already? Do you intend to do so? Let us know in the comments below.