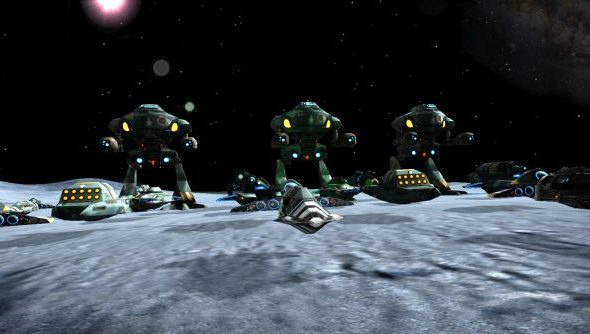 Battlezone, the late 90s FPS/RTS hybrid where you play as a big tank, was not only massively ahead of its time and actually quite good, but well worth a remake according to Rebellion. They’re doing exactly that, prettying it up for a 2016 night on the town, getting it connected online via Steam and letting us tinker to our tank-heart’s content by the workshop.

Even things from the past get to live in our upcoming PC games list, these days. It’s time travel gone mad.

Here’s how it’ll look ‘n’ play in a new trailer:

While Rebellion are publishing, it’s an out-of-house developed title while the main studio continues to work on an updated VR version for Playstation and other unannounced things. Big Boat Interactive (the greatest named developer in games) are doing most of the work, brought on board because they include three members of the original development team.

For those who possibly never played it, Battlezone ’98 was a spin-off of the classic ’80s arcade cabinet that you’re probably familiar with of black and white wireframe battles. It let you build bases and control armies, all while driving a tank about. It’s a cult hit and nobody’s ever really replicated it properly since, the increase in graphcial fidelity and time taken to make a triple-A game meaning combining two genres is a lot more difficult.

The remaster is hitting in Spring, so shouldn’t be too much of a wait.