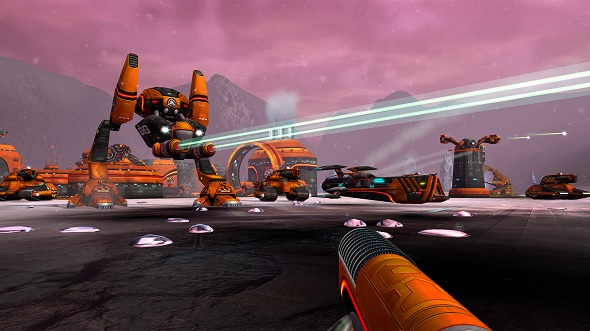 If you took Star Wars Battlefront and removed the Star Wars bit you would end up with something like Battlezone: Combat Commander. It’s a combo of a real-time strategy game and a first-person shooter, all wrapped up in an alien invasion story. We have ten copies of it up for grabs below.

Even if you don’t win this giveaway you should check out the best free Steam games.

If you’re an older gamer it might be that you remember the Battlezone series – initially released in 1980, the first game is considered the first virtual reality arcade game. It has since gone on to get a number of sequels but was forgotten in recent years until developers and publishers Rebellion revived it.

Now we have Battlezone: Combat Commander, which is a remake of the original sequel – a game that proved unpopular back in 1999 as players were not used to its unusual blend of genres. It was said that FPS players did not want to think while RTS players did not want to die. Due to that, Battlezone II struggled to find an audience, but we’re a little more used to games that challenge us in multiple ways these days.

Hence Rebellion have brought it back and with a good lick of paint so that Combat Commander doesn’t look quite so old. It also has competitive and cooperative cross-player multiplayer built in, mod support, and advanced AI. The story gives you 24 missions to steer tanks, defense units, and soldiers across six different worlds as you fight back the alien invaders.

If you want to win one of the ten copies of Battlezone: Combat Commander we have up for grabs then you need to enter the competition via the widget below.Every action you complete is worth one entry into the giveaway, and the more actions you complete the more chance you’ll have of winning. We’ll also need your email address so we can send you a code upon winning – we won’t send you spam, we promise. Please read ourterms and conditionsbefore you enter.