“It’s actually incredibly thoughtful,” enthuses Kite & Lightning COO August Bradley Cenname. “I can’t wait until it comes out and people see what it really is. It’s dripping with irony all over the place, and it’s a genuine look at our society.”

Have we got the wrong number? The webpage for Bebylon: Battle Royale describes a VR arena fighter about babies brawling in pimped-up buggies. Have we pressed the wrong key and wound up in a top-secret conference call for the next BioShock instead?

“What might not be immediately apparent are the observations and commentary,” expands Cenname. “Without it being in your face, we’re building out a big world around the game that, while completely absurd and exaggerated to breaking point, still hits a lot of chords in the society we live in.”

It sounds unlikely. Grab a second glimpse at that webpage and you’ll see that Bebylon places you in the body of an eccentric superstar infant in a Rolls Royce hovercraft – equipped to destroy the ginormous ego of your tiny human opponent before a baying audience. Your weapons are sucker punches and ‘bitch slaps’. How high-brow can it be?

Kite & Lightning’s history suggests they deserve the benefit of the doubt, however. These are the developers best-known for Senza Peso – a first-person VR ‘mini opera’ that finds a soul journeying into the afterlife. Delighted players on its Steam page describe a magical sojourn through mediterranean architecture and surrealist landscapes of fire and brimstone.

From that, to this.

“One is epic grandeur and the other is just crazy nonsense,” laughs Cenname in understanding. “Bebylon looks like a really dumb, fun, smash-’em-up kind of game, but there are some deceptive qualities to it.”

Although Bebylon is played through VR, it’s controlled simply using a traditional controller. It resembles a vehicular Smash Bros: a simple arena party brawler with a social dimension. But Cenname insists it’s “so much more than that” and “not a direct evolution of any game”.

Some of those hidden qualities, he suggests, lie in Bebylon’s system of gestures. The babies who do battle don’t attack each other directly, thankfully – instead doing damage to the self-worth of their opponent with oversized, ethereal fists attached to the outside of their cars. 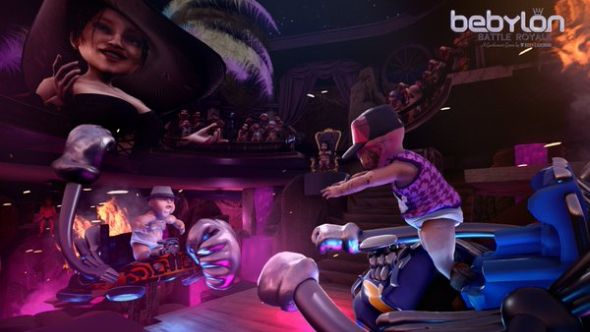 As the giant arms throw slaps and punches, the baby inside mimics the attacks, in a series of moves more similar to American Football end zone dancing than combat. Players aren’t just fighting, they’re taunting each other.

“You get these gestures that you just cannot describe, so we’re not even trying to describe them,” says Cenname. “But when you see them it just brings a poetry to the game which you don’t expect from a baby brawler.”

“The nuances of the gestures are really beautiful and almost profound,” explains Cenname. “Cory just has this sensibility that I have never seen anywhere else.”

Right. Ok. But why this bizarre, pimped-up vehicle for the undeniable creative talents of the Kite & Lightning team? And why babies, for goodness’ sake?

“Because we’re all babies,” says Cenname. “Deep down inside, we’re all not at the maturity level we could be. There are deep-rooted desires and needs and hopes that reflect a childlike outlook on the world. And then there are our baser impulses that you can play up with babies – the crying, the demands, the unreasonable expectations of the world around you.” 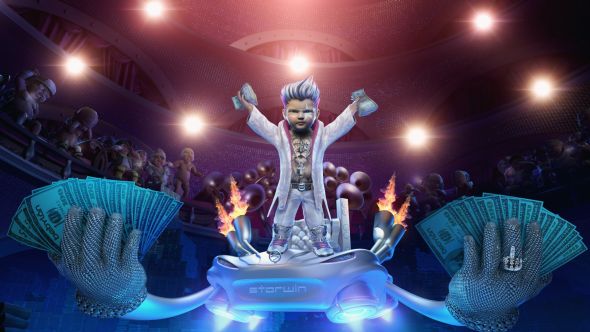 Clearly, this is where some of that social commentary comes in. It’s worth noting that in Bebylon lore (yep, they have that), these infants aren’t strictly babies. They were young when immortality struck humanity, but have since grown into adult individuals in tiny bodies – baby politicians, baby chefs, baby gangsters.

In the infant-built city of Bebylon, overcompensation is a part of everyday life, and that’s reflected not just in the fights but the furs and chains of character customisation.

“I have to say, Cory’s designing some really stylish looking babies,” notes Cenname.

The team have worked in Unreal Engine 4’s Blueprint scripting system, before passing over their work to the studio’s top programmer for tweaking in C++. The result, footage suggests, is among the most competitive and fast-paced fare you’re likely to find for VR. But as Cenname is keen to get across, there’s more going on. Baby brawling, apparently, is the new avant-garde.

“It’s not about the fight,” he says. “It’s about the taunting and the egotistical narcissism. It’s about personality and confrontation. I like that it’s fun on the basic battle level, but it’s rewarding way beyond that.”

Bebylon is in development for VR. Unreal Engine 4 is now free.

In this sponsored series, we’re looking at how game developers are taking advantage of Unreal Engine 4 to create a new generation of PC games. With thanks to Epic Games and Kite & Lightning.