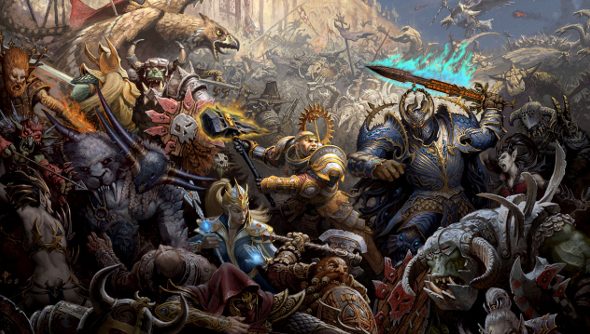 This week, the lights were finally turned off in Warhammer Online, and it ceased to exist in any tangible way. Now it’s in MMO heaven, playing the harp very poorly. But could there still be a way to play it, to resurrect it as, if not the MMO we remember, at least a single-player ghost?

“In every unreleased, internal-only developer build of the Warhammer client, there was the option to run without a server,” Meggs writes on his blog Shiny Toys. “As the lead client engineer I spent a good amount of time doing that. There were no login or character selection screens. There were no NPCs or other players. There was no gameplay of any kind. It was just you and the entire world spread out before you. You could fly around like Superman, or teleport anywhere at will. You could watch the sun rise and set over Altdorf, and see the smoke rise from fires forever burning. And you could see the thousands upon thousands of hours of work and craftsmanship that went into creating a world that has now been unplugged.”

If EA wanted to, the publisher could force single-player on, it wouldn’t need to be released with any art files or even a big download. “[I]t’s a place for the die-hard fans to visit by themselves, to reminisce and remember the times they had there with others,” Meggs continues. “It’s something the hundreds of developers who worked on it will still be able to run for their kids someday. It’s a piece of history for Professors of Game Studies in 2113 to better understand what MMORPGs looked like before the neural implants.”

While it wouldn’t be Warhammer Online, it would be a museum to remind people what the game once was. “It’s an effort by all of us, as developers, to preserve a living record as our transient medium is created and destroyed. I can’t do this; I left behind the code when I left EA. But there are people inside EA who can easily make this happen.”

I share his desire to see WAR preserved, even though I stopped playing years ago. It’s a horrible shame when an MMO gets turned off, and all those years of work just vanish, potentially being forgotten. I’d love to see this happen to every MMO that gets put down, so that years after, people can still visit it and see what the genre once offered.