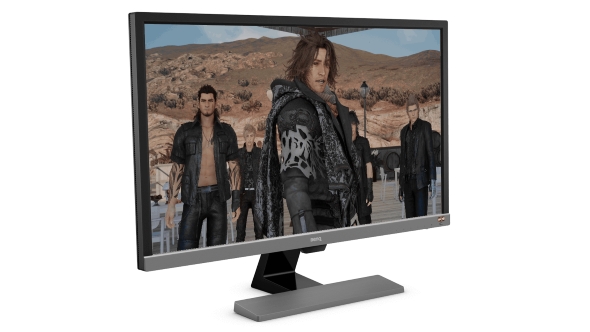 The BenQ EL2870U may be a relatively cheap 4K monitor, but don’t be fooled into thinking it’s a bargainous entry into the wonderful, brightly coloured world of high dynamic range gaming. This is not the HDR screen we were looking for.

Check out our pick of the best gaming monitors you can buy today.

If the BenQ EL2870U delivered your first taste of HDR, whether in gaming or video content forms, you’d be forgiven for disgustedly jamming it into the same box as 3D and sealing it shut. You know, that scratty little box that’s been opened and taped closed again so many times the corrugated innards of the cardboard is starting to show, and there’s more tape on it than when a 3yr-old tries to wrap up his mother’s day present all on his own. Aww.

Yeah, the same box which has had “do not open again until 2039” scrawled all over it in black markered capital letters.

Which is a shame, because when done right, HDR can be absolutely stunning. Whether you’re watching Amazon or Netflix in 4K HDR, or gamboling through the glorious alien vistas of Mass Effect: Andromeda or Destiny 2, when you’re doing it on a capable panel it can take your breath away.

Something like a gorgeous LG OLED screen, or one of the AU Optronics VA screens being used in Nvidia’s Big F**mat Gaming Displays. Sadly, a 300cd/m2 TN panel is not what we had in mind.

But that’s what we’ve got in BenQ’s 28-inch 4K HDR Video Enjoyment monitor. Yeah, that’s a category now. But if you’re hoping to glean any enjoyment out of 4K HDR video you’re going to be sorely disappointed.

We tried the EL2870U’s 4K HDR chops out using both the HDR10-powered streaming goodness of Netflix, the few HDR-capable games around, and with a host of different manufacturers’ 4K HDR showreels. The only thing that gave us any joy were those showreels, but then that’s precisely what they’re designed for. But you’re not going to spend your evenings watching the same 10 minutes of over-saturated hype-footage over and over again, so they don’t offer quite as valuable a test.

Even though the test footage is sharp, bright, colourful, and does the best job of any of the 4K HDR content we could muster to show this TN panel at its best, it’s still well short of doing high dynamic range content justice.

The big problem is this panel just doesn’t have the necessary range.

The very brightest areas look fine and the footage is crisp at 4K, but it’s the dark areas where you can really see where this panel fails with HDR. There’s no depth to the shadows, and certainly no detail – it’s all dancing pixels and strange visual artefacts. 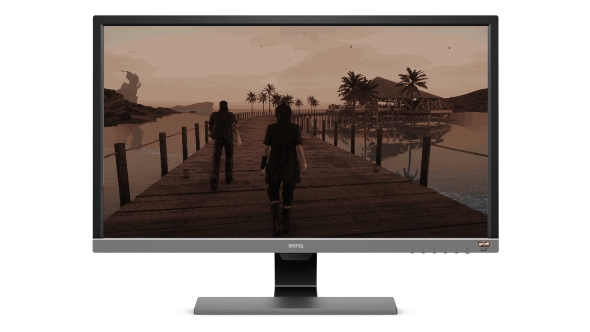 The problem is far worse when you try watching a HDR stream in Netflix – along with Amazon, it’s likely where most HDR content will come from in the short term. And it just looks plain bad. The colours end up looking crushed and there’s none of the promised detail in the darkest areas of scenes HDR should deliver.

Good high dynamic range content is able to provide extra depth and detail at both the highest and the darkest extremes of the content, but the limited panel used in the BenQ doesn’t really stand a chance.

And there is no way in hell you could ever use the monitor in pure HDR mode, making that button on the front absolutely vital. Though you still have to delve into the Windows settings to turn the HDR option off to rid yourself of all traces.

It’s made all the more obvious as I’m testing another BenQ HDR-capable monitor at the moment. The BenQ EX3501R is a 35-inch curved ultrawide with a VA panel, 100Hz refresh rate, and is genuinely capable of making HDR look good. And makes the EL2870U look even weaker by contrast.

But the BenQ EL2870U is absolutely not a bad monitor, especially not as a budget 4K gaming screen. I have my own personal issues with the image fidelity of the twisted nematic technology used in lower-res monitors, but the 4K TN panels have been shown to be some of the best ever made. The one used here in the BenQ has decent colour reproduction, and doesn’t have the same sort of washed-out feel you will get with practically all 1440p and 1080p TN screens. 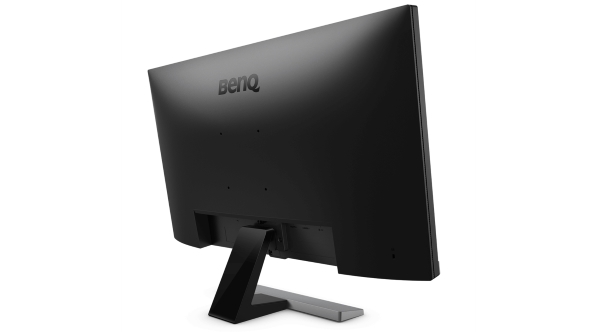 It’s also nicely responsive and has AMD’s FreeSync tech baked into it to keep things running smoothly at the native 60Hz refresh rate… so long as you have a powerful Radeon GPU that’s capable of running 4K games at 60fps. So an AMD Vega 64, with some in-game settings dialed back, then.

The contrast levels are pretty decent – though obviously not HDR decent – and the black levels are okay too. TN panels never get all the way down to a decent representation of actual black, but the BenQ is capable of at least showing clear delineation between the different shades it can produce… it’s just not able to produce that many of them. That said the white saturation really is quite poor, making it difficult to make out real detail in brightly lit areas.

But that’s to be expected from this panel technology, and when you’re talking about less than £400 for a 28-inch 4K gaming screen it’s not really a huge issue. In the US it’s a little more, starting out at $499,but for that money you’re getting a big screen monitor, with pretty much the best TN panel you can buy, and AMD’s FreeSync tech thrown into the bargain.

You can, however, still buy a genuine LG IPS 4K display for only a little more (but still around $400 / £400) and you still get the FreeSync goodness. Close, BenQ, but no cigar. And please, stop trying to market it as an HDR screen, it’s doing you no favours.