I love ultrawide monitors. I have to get that out of the way first thing because it means I’m already rather predisposed towards the curvy $849 ( £718) BenQ EX3501R gaming monitor. But even if I wasn’t I’d be happily recommending this quality screen to anyone with a powerful AMD graphics card and a penchant for first person shooting. I’m going to miss this expansive monitor for the rest of my Far Cry 5 playthrough…

Check out our pick of the best gaming monitors you can buy right now.

Now BenQ aren’t selling this as a gaming monitor, that’s what their Zowie stuff is for, but because of the quality panel, 100Hz refresh, and FreeSync-toting goodness, it makes for a great ultrawide gamer. Unlike the recent BenQ screens we’ve tested – and those esports-obsessed Zowie monitors – the EX3501R isn’t using a TN panel, and that is very much to its credit.

Thankfully there aren’t any 21:9 curved TN panels out there, at least not that anyone have told BenQ about, so we’re getting a VA display in the EX3501R, with all the vibrant colours and solid black levels you might expect. If you’re worried that the 4ms GtG response time is going to have that big an impact on your gaming performance over a 1ms TN panel, then good luck to you in the pro leagues, good sir. The rest of us will enjoy our games looking gorgeous without the washed out colouring you’ll be used to.

As I mentioned earlier the BenQ EX3501R comes with a 100Hz refresh rate to match its AMD FreeSync support. And that makes it a perfect fit for Radeon gamers who have been lucky enough to purchase a high-end AMD card – there’s not many of you out there, however, such is the paucity of Radeon stock these days.

It’s also got a rather subtle 1800R curve to it too, which is fine on such a broad panel. Having the extreme edges brought in a touch makes sense on an ultrawide gaming screen, and because it’s a VA panel there’s not much in the way of viewing angle issues either. There is sometimes a little discolouration at the far edges, but only a very slight amount. 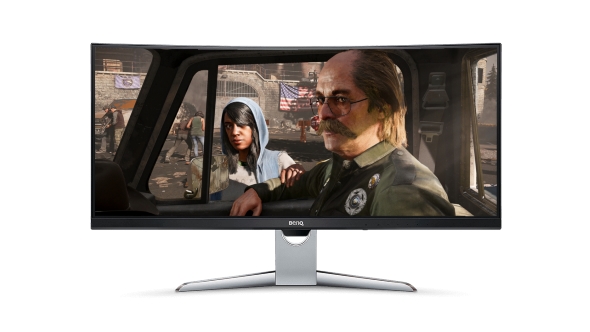 The overall panel quality is very good. It delivers decent contrast, offering bright, vivid colours at the top-end of the scale and really dark shades down at the bottom. Maybe it’s a touch too dark as default as the black levels get a little crushed at the lowest end.

That said the white saturation is excellent, offering clear delineation between the brightest tones. The VA panel also displays a smooth graduation between tones too, with zero visible banding to the colour gradients.

And with the combination of its 100Hz refresh and the AMD FreeSync smoothness you end up with a responsive, smooth gaming experience on a Radeon card. My review machine has an RX Vega 64 as its base card and with the two it made Far Cry 5 a glorious experience.

Yes, the BenQ EX3501R has HDR support in it, which looks terrible if you spend any time looking through its lens on the desktop, but can make games look fantastic. With only a 300nit peak luminance it’s not able to deliver the full range of what HDR is truly capable, but it does a great job of getting close.

And with the Radeon partnership with Ubisoft on Far Cry 5 it performs well on the AMD Vega card, and really loves itself some FreeSync-y goodness too.

The EX3501R is far more HDR-ready than the BenQ EL2870U was. Using the same HDR test footage the difference is night and day, mostly because you don’t get the same level of noise in the black tones as you do with the weaker TN BenQ. 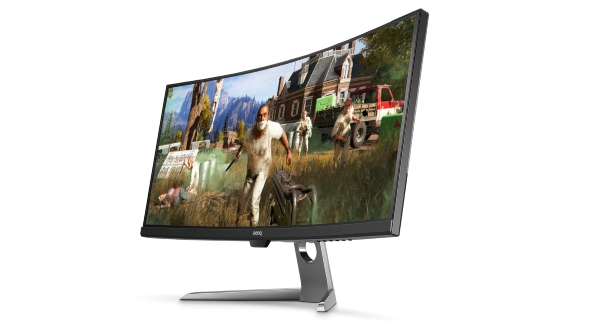 That’s just the panel and the electronics, but the design of the EX3501R is rather pleasing too. The sweep of its curve is nicely complemented by the thinness of the screen’s bezel. It’s not quite edge-to-edge, but it’s damned close for such an expansive display. It’s fully height and swivel adjustable too, and the stand is wobble-free and pretty classy looking as well.

BenQ have done a great job with the EX3501R. It looks great and its panel makes games look just as good. Probably better. Of course you have to pay for this wide a gaming screen, and especially if you want such a smooth experience, but it’s still likely half the price of the ultrawide HDR G-Sync screens coming later in the year.