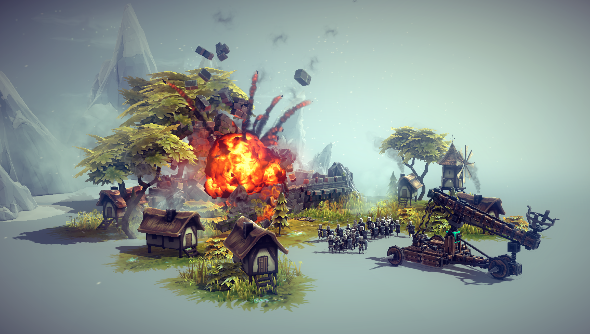 Castles. They’re just begging to be blown up, aren’t they? That’s the name of the game in Besiege, a lovely looking physics destruction game from Spiderling Studios where you build bloody great catapults (or even spinny blade things) and charge them into fortresses.

It’s on Steam Greenlight right now. Take a look at the trailer and see why we’re grinning at its potential.

Each castle (or even peaceful hamlet) you attack with your machines will be filled with soldiers and livestock. Wiping out forces and destroying their food will allow you to conquer kingdoms, which lies as the main goal of Besige. Quite how you destroy these settlements is entirely up to you; build a completely efficient, clinical death deliverer, or go utterly crackers and produce something from the drawing board of Wacky Racers. Your machines can be built freeform and include such armaments as flamethrowers, blades, pistons, rams, and hinged sections.

Destruction that you cause can backfire on you though. Fire spreads, and your constructs are mostly made of wood. Be careful.

The project has been greenlit, but if you fancy hurling rocks at little men right now, head to Besiege website and you can buy into the alpha.

{"schema":{"page":{"content":{"headline":"Besiege is all about destroying peoples lives with massive siege engines","type":"news"},"user":{"loginstatus":false}}}}