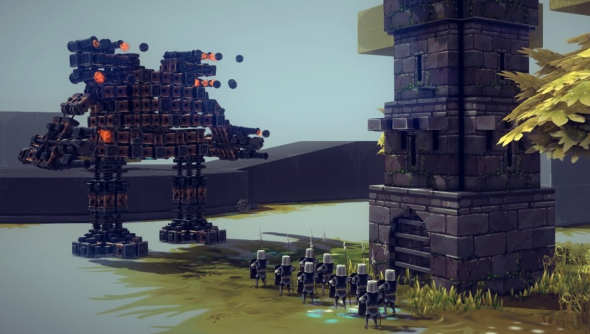 In theory, Besiege challenges you to make a siege weapons to kill sheep, soldiers, and cities. In practice, its community have been making some of the most stunning contraptions on the internet.

They’ve turned cogs, cannons, and elastic bands into AT-ATs, giant walking automatons, and something that would look right at home in The Wicker Man.

Someone’s even made Wall-E.

In Besiege Spiderling Studios gives you a toolbox of medieval equipment and tasks you with defeating your enemy on each map. That might mean killing a standing army or destroying a castle. Whatever the defending force you’ll need to custom build a machine to get the job done.

The Besiege community’s burned through the missions in the Early Access build of the game and started on some much more creative challenges.

One player, BataLeon, for instance, has made a two-legged robot with flamethrowers for hands:

It’s sort of like Disney’s Iron Giant, albeit with wood instead of iron and instead of lavishing a lonely child with love and affection the machine is torching villagers.

Sergiu’s creation certainly looks the part but when it comes to walking it does appear to struggle before tipping forwards and exploding.

McCrBa’s taken the Star Wars theme and managed to turn all those cogs and bits of lumber into a working pod racer. 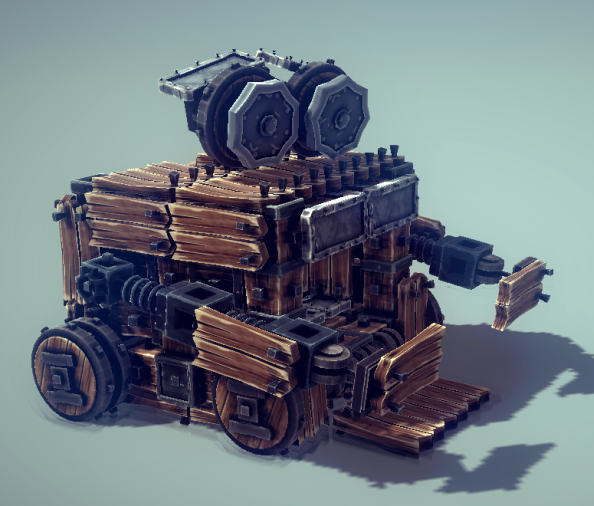 UnholyTeemo’s also made a robotic cube, but his eats villagers:

On the one hand,Evan Smith’s creation is is incredible, intricate, and deeply impressive. On the other it’s a fire breathing scorpion with a swastika for a tail.

Besiege’s community’s also finding new ways to use weapon systems that have existed for hundreds of years:

That missile it fires, that’s a cannon.

Not every device works perfectly, however. And they’re just as hilarious: