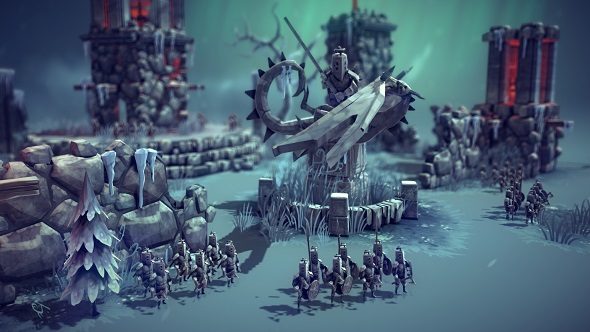 Announced for release in Q3 of this year, Spiderling Studios have unveiled the Besiege Multiverse, a mode which combines the two most wanted features for the siege weapon builder: multiplayer and map creation. This new mode allows up to eight players to work together in a single session to make or destroy whatever they desire.

Serial tinkerers best check out our list of the PC’s best simulators.

The Multiverse allows players to not only build new siege weapons and vehicles, but entirely new levels, game modes and objectives in real time with friends. Builders can even simulate levels mid construction, in order to test certain sections for possible problems. The communal crafting aspect seems somewhat reminiscent of Nuts and Bolts’ Test-o-Track, where players could jump in and out of the garage to rework and test new creations with friends. Expect some dedicated workshop crews to come out with fantastical creations once the update drops.

Spiderling Studios plan to keep Besiege fans updated on the development of the Multiverse with regular videos, alongside guides to help players make the most out of the new suite of level editing tools. Besiege will be subject to a small $2 price increase upon the release of the Multiverse, but players who already own the game will experience no extra charge.

Besides this announcement, Besiege has also received a new update which adds two new Valfross maps for players to wage war on. The first map is set in an abandoned mine, while the other has builders laying siege to one of Valfross’ great fortresses. Spiderling have also announced that their localisation system is almost complete, meaning players can upload custom translations to Steam Workshop for others to download. These translations will then be implemented in the full game, hopefully vastly expanding the number of languages Besiege supports on launch.

For those wishing to get acquainted with Besiege’s siege crafting before the Multiverse update drops, it is currently 30% off on Steam, going for $5.59/£3.91.