Looking for a list of the best dragon games on PC? Since long before the days of Dungeons and Dragons PC games, and before Tolkein became the poster boy of fantasy, dragons have been the most fearsome and majestic creatures of myth. Usually they breath fire and hoard gold, other times they become companions and deign to be ridden, and more often than not they get mistaken for wyverns.

PC games, and the best RPGs in particular, are naturally swarming with dragons and dragon-like creatures both as friends and foes. We do love an epic showdown and nothing can deliver quite like a skyscraper-sized, fire-breathing lizard.

We’ve collected some of the best dragon games on PC where you can encounter, battle, or befriend a dragon. Plenty of the best selections are from multiplayer games or MMORPGs. Given that dragons can’t often be taken down by a single adventurer (looking at you, Dragonborn) it makes sense that plenty of games that look to tackle dragons do so at the epic proportions of hundreds of players joining together to defeat them. Here are the dragon games you’ll want to try if you need a whole lot more in your life.

Here are the best dragon games on PC: 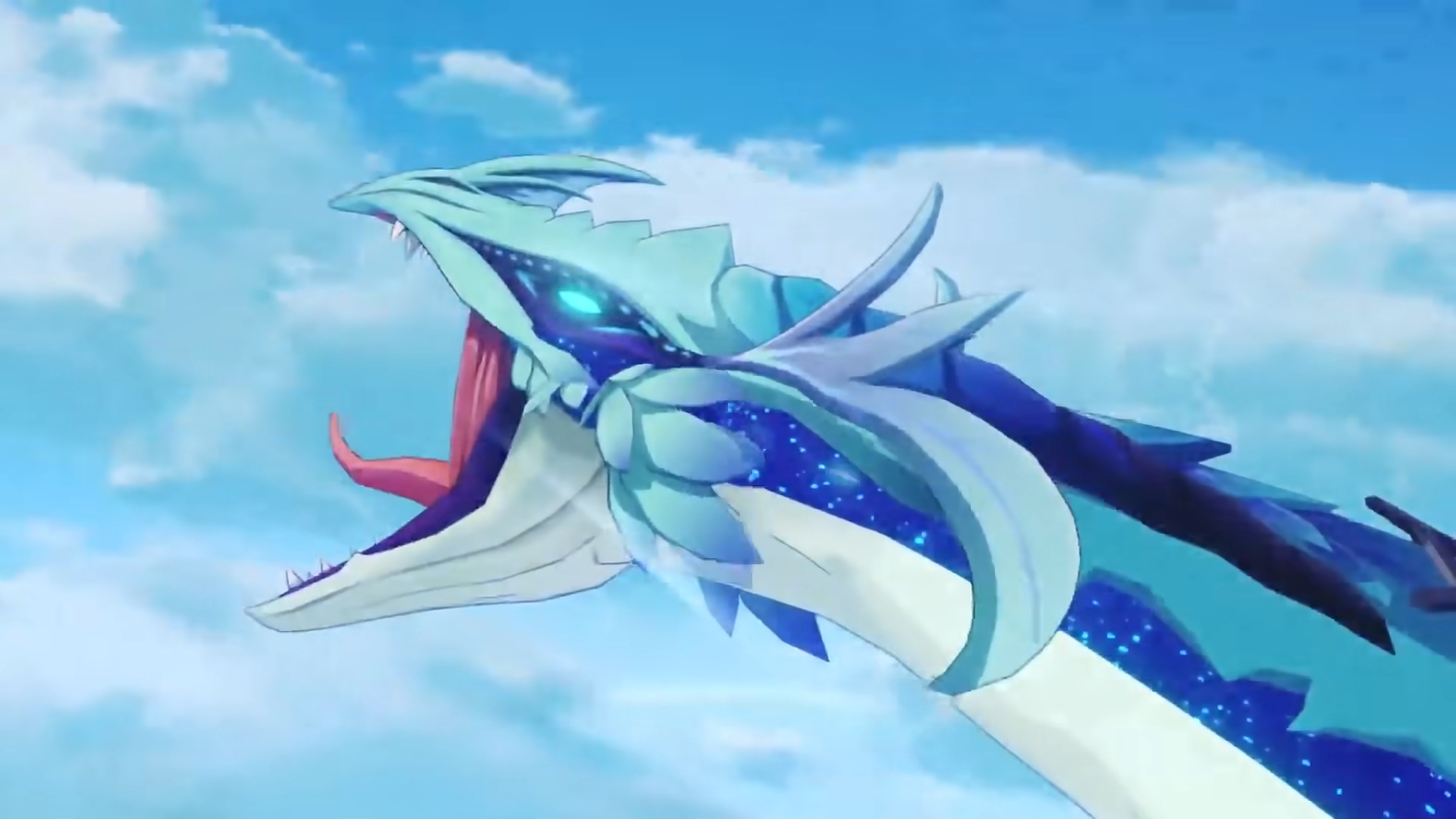 Indeed, dragons actually play a large role in the game’s lore, with them being the dominant species in the long distant past. Genshin Impact includes quite a variety of dragons too, in that you’ll find both land and sea varieties, and even dragons who are capable of talking. If you’re after your dragon fix, and don’t want to shell out for a whole new game, this could be a great choice. Even if you’ve played Breath of the Wild, this is a similar, but decidedly distinct experience, rather than a lazy clone. 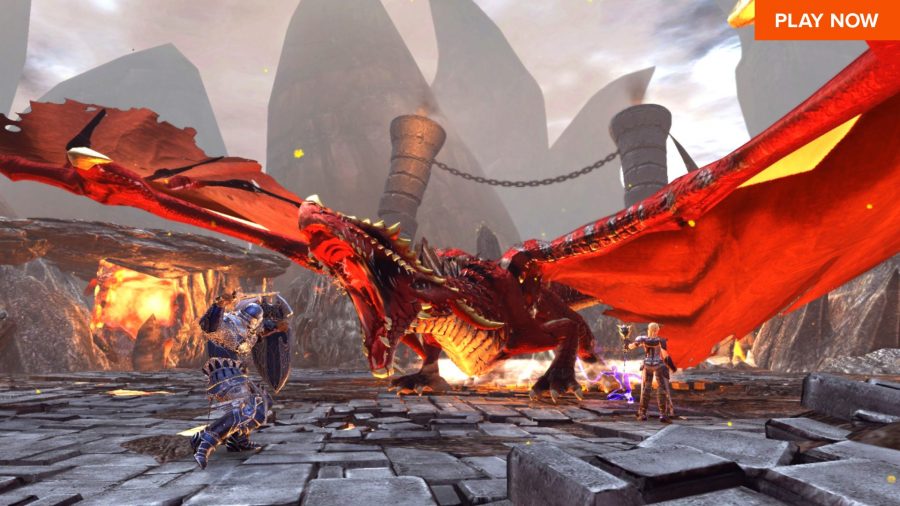 You’d expect some good dragons from a game set in Dungeons & Dragons’ Forgotten Realms, and Neverwinter certainly delivers in that respect. There are campaigns that are entirely focused on dragons, weekly dragon-slaying quests, mighty dragon bosses, and all kinds of good Dragon loot to enjoy in this free-to-play RPG. Developer Cryptic Studios does an excellent job drawing on Dungeons & Dragons’ wealth of lore to create some of the toughest dragons in games. 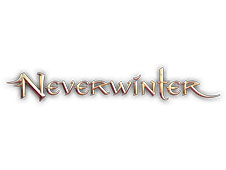 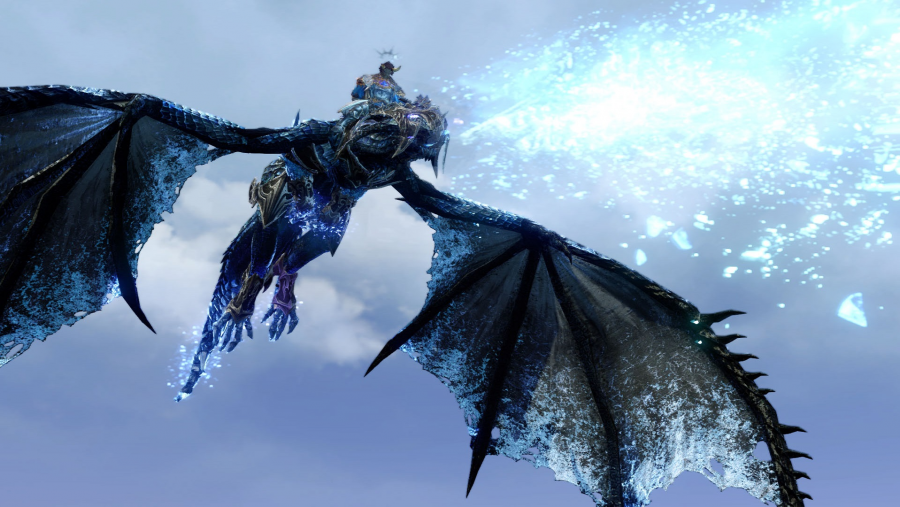 For most of this MMO’s illustrious lifespan, dragons have represented the pinnacle of combat challenges. These winged reptiles are often world bosses capable of tearing your character limb from limb, however, thanks to the 4.5 update you can now raise your own dragons in Archeage and use them as mounts. 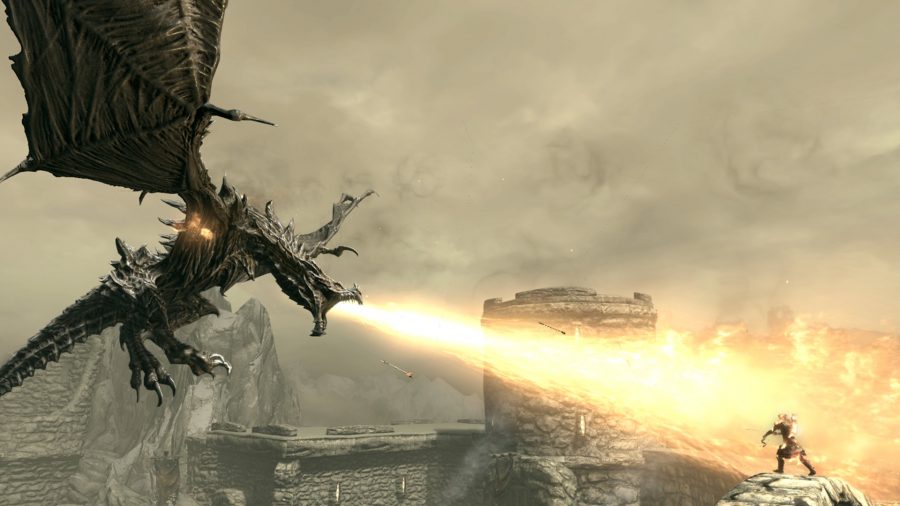 Skyrim’s dragons have defined a generation of scaled beasts the same way its horses have defined a generation of mountain climbing. Alduin and his ilk are the final fight for many a Dragonborn in the snowy peaks of the Nord homeland. Though the main story arc leading up to the stoic and storied dragons of Tamriel is a great finale to the story, dragons are just as likely to pop up while you’re picking flowers as when you’re actively seeking them out. One of the best and worst feelings in Skyrim is hearing the giant wing flaps directly overhead while you’re slowly trudging back to town overencumbered with looted goods and thinking “oh dear.” 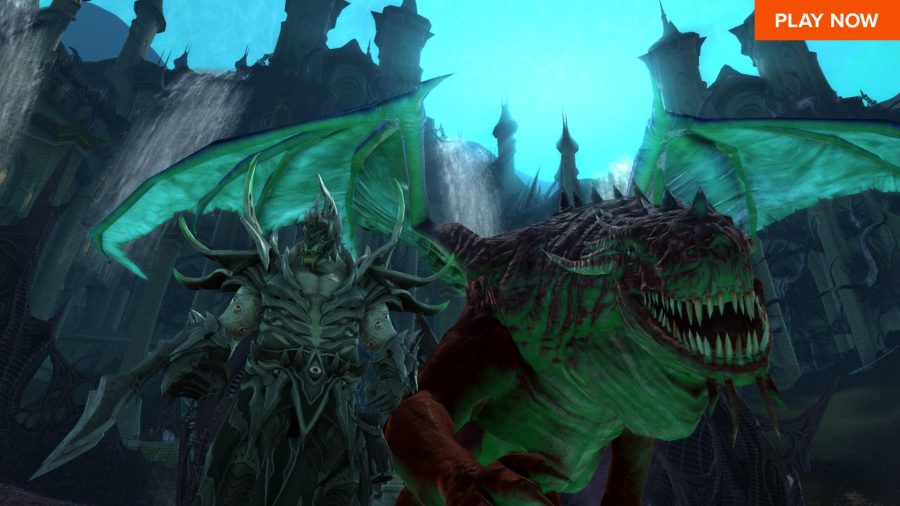 You won’t stumble upon dragons very often in this free MMO, instead dragons are presented exactly as they should be: fearsome endgame bosses that will wipe your raid group of 20 countless times before you finally get the best of them. You’ll need to do your homework and bring plenty of resources to take on the several gods of the Blood Storm.

Elsewhere Rift feels remarkably similar to Classic WoW, from the selection of classes and the two alliances right down to the talent tree. There are hundreds of hours to grind through, but Rift does a great job of opening up new mounts, abilities, weapons, and loot to feed the power fantasy. 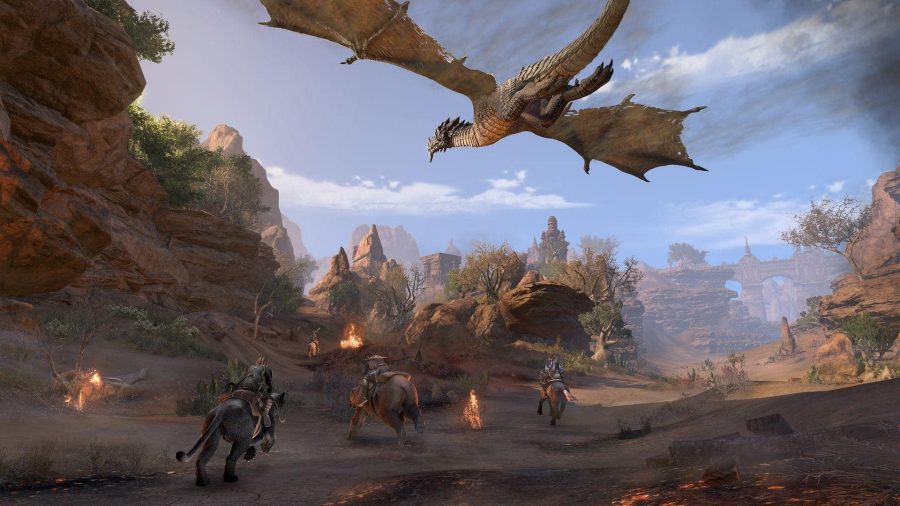 Not to be outdone by Skyrim, The Elder Scrolls Online has finally added dragons to its list of enemies. Although not present in the base game of ESO, the Elsweyr expansion that brought players to the Khajiit homeland also adds the giant winged beasts, setting all those desert sands on fire. Dragon fights in ESO are open world encounters meant to be tackled by dozens of players all coming together on the same map. Dragons can be spotted flying overhead before they eventually land in a space big enough for a fight where players can join together to take them down. Dragons are no joke in ESO, spewing out fire and other nasty AOE effects that can easily kill any player that isn’t on their toes. 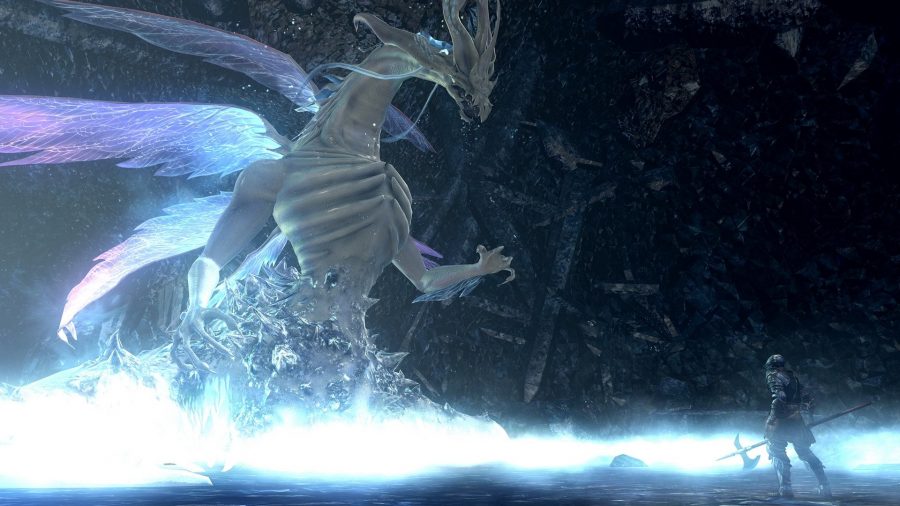 It’s no surprise that a series lauded for its difficulty would pit players up against some of the biggest and baddest creatures of fantasy. For all that dragons feature in the lore of Dark Souls, it’s rare to come across the genuine article. Most of the dragon kin in the Dark Souls series are cousins of the big beasts: drakes and wyverns and other dragon-like creatures- but that doesn’t make them less formidable. From the true dragons like the thoroughly repulsive Gaping Dragon and Seath the Scaleless of Dark Souls to the less dragon but no less large Ancient Wyvern of Dark Souls 3, each are formidable foes in keeping with the Dark Souls tradition of epic boss fights. 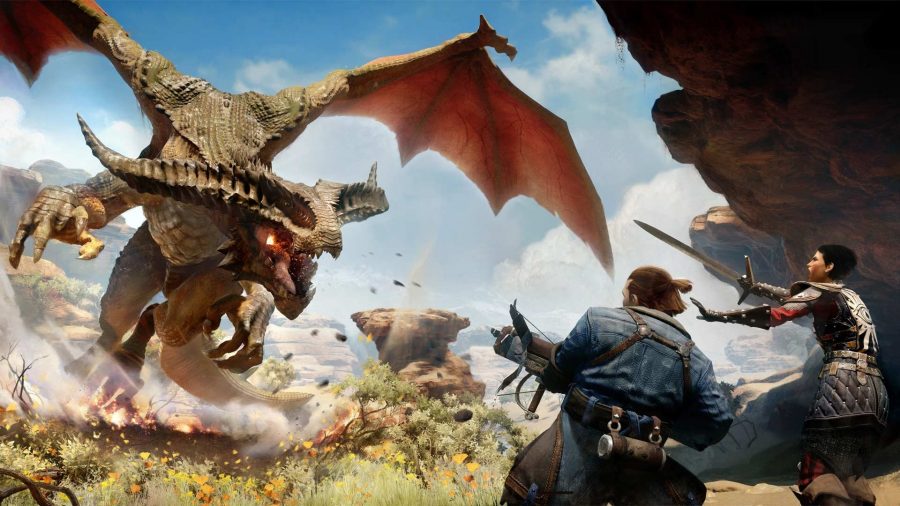 Dragons do appear in the first two Dragon Age games, heck the final boss fight of Dragon Age: Origins is with the giant Archdemon in the form of a dragon. Dragon Age: Inquisition has the best of the brood by far, though. After killing your first dragon anywhere out in Inquisition’s huge explorable zones, you’ll unlock a new quest asking you to kill the rest of the nine High Dragons. Each one dwarfs your party with a giant wingspan and equally giant list of special resistances and abilities. Dragon fights can rage on for quite a while since the Inquisitor and company only come as a party of four. 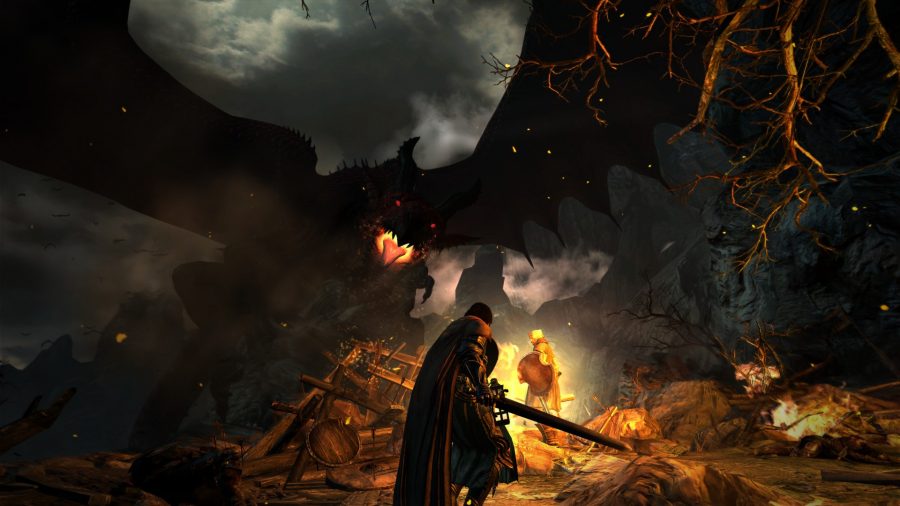 Although the original Dragon’s Dogma never made it to PC, the later port Dark Arisen brought us the Monster Hunter-style beast slaying that we originally missed out on. Dragon’s Dogma is packed with other gnarly big baddies from fantasy to slay, but with their name in the title, you’ll not be surprised to hear that dragons are kind of a big deal in Dark Arisen. The game starts out with one such monster eating your very heart out and in the true RPG hero style of “what doesn’t kill you makes you stronger,” you go on to slay beasts of all manner despite your new chest cavity, including heaps of draconic critters. 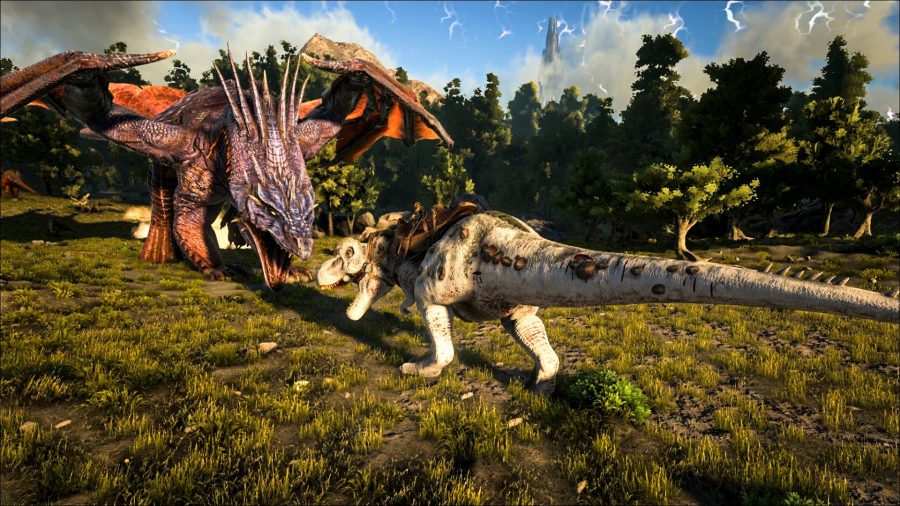 In Ark: Survival Evolved, a game ostensibly about taming giant creatures and cleaning up their poop, dragons are not for fighting. Or, they are for fighting, but usually with the end-goal of taming and then riding them. It’s the How To Train Your Pet Dragon game that we definitely needed on PC. Ark originally only had one dragon: the purple and orange beast that can only be visited by generating a Dragon Portal to the Dragon Arena. Unfortunately, in the base game you’re only able to fight and kill the dragon and can only tame it with the use of console commands. In the Scorched Earth DLC, however, there are numerous additional dragons (wyverns, actually) from poison to lightning to fire that can be battled, tamed, and flown all over the map. 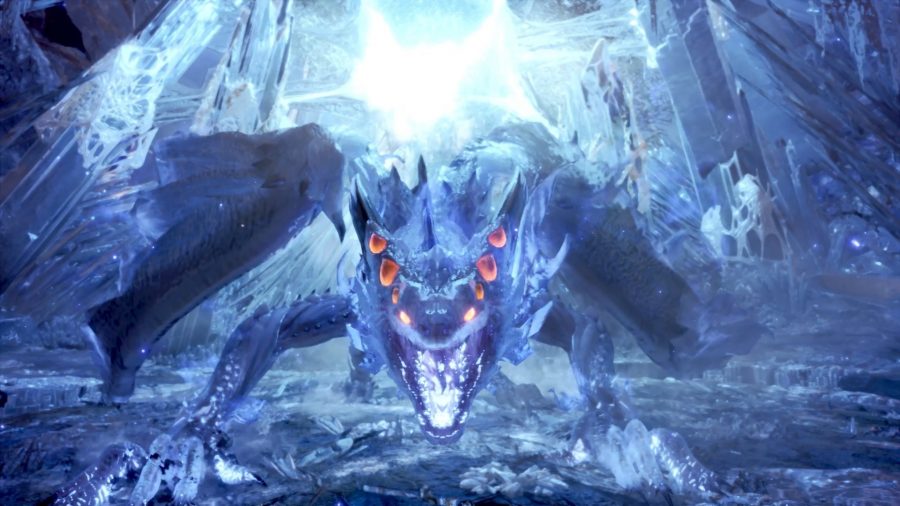 Monster Hunter World is stuffed full of elder dragons of many different types. Though it isn’t the first time that dragons have shown up in the series, there’s no doubt that they’re most impressive in MHW. Monster Hunter World’s dragon fights make for some of the biggest and toughest encounters you’ll face in this open-world game, culminating in the final fight of the story against the elder dragon Xeno’jiiva. That isn’t the final dragon though. With the upcoming Monster Hunter World: Iceborne release date players will also be fighting against the icy Velkhana and Namielle elder dragons as well. Plus, not enough dragon games let you turn your fiery foes into a fetching set of armour. 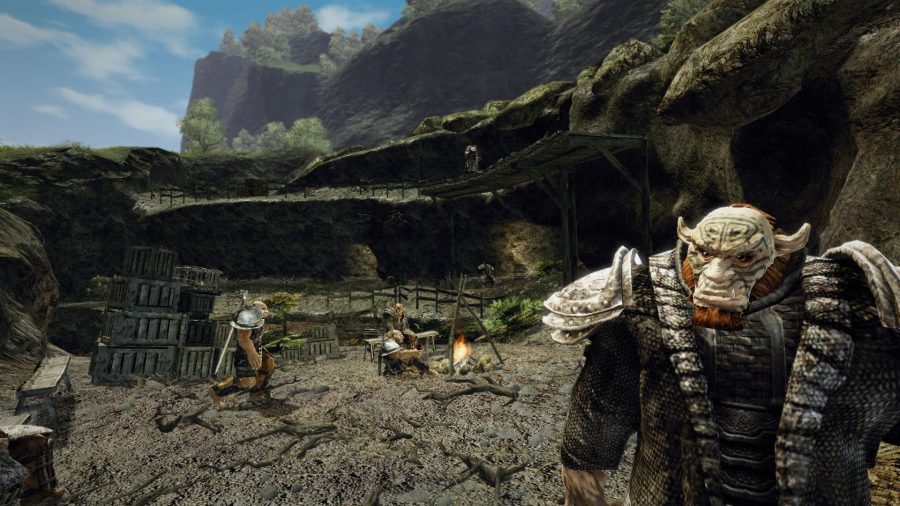 The Gothic series, like some other sword-swinging fantasy RPGs on this list, have a history with dragons. If you’re looking for an option from the old games category then Gothic 2 features a number of dragon fights throughout its campaign. Although they aren’t nearly as big and epic as the other dragons on the list, Gothic 2’s many dragon fights can still be a challenge. Gothic 3’s dragons are considerably more impressive, or at least more dragon-y in their movements, even if they still aren’t quite the house-sized creatures of other games. 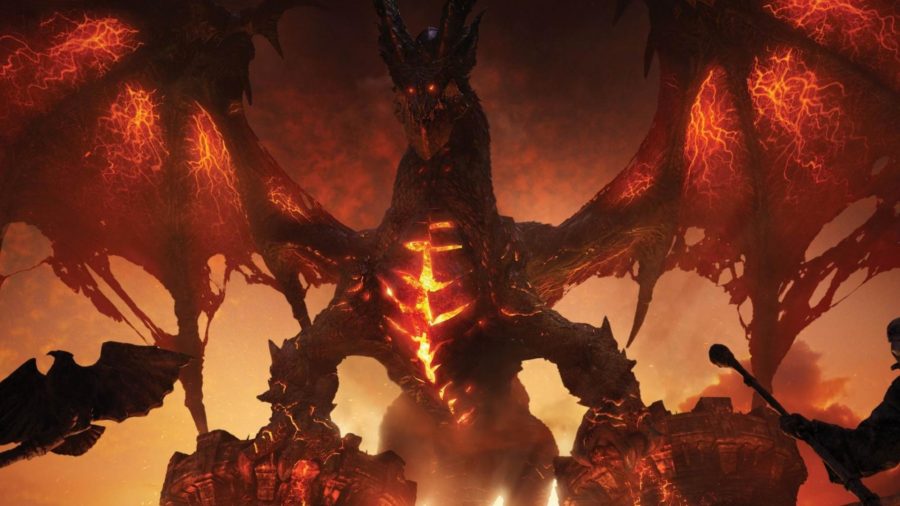 World of Warcraft’s third expansion Cataclysm from 2010 (not quite classic) brought with it sweeping changes when the dragon Deathwing wrought havoc across all of Azeroth. Whole areas of the map and environment were left affected by The Shattering, the world-changing event of Deathwing’s return. Naturally, Deathwing also serves as the final boss encounter for the Cataclysm expansion in an epic faceoff with players. Years later, you can now degrade Deathwing by riding a dragon mount in his image just so he remembers who bested him. 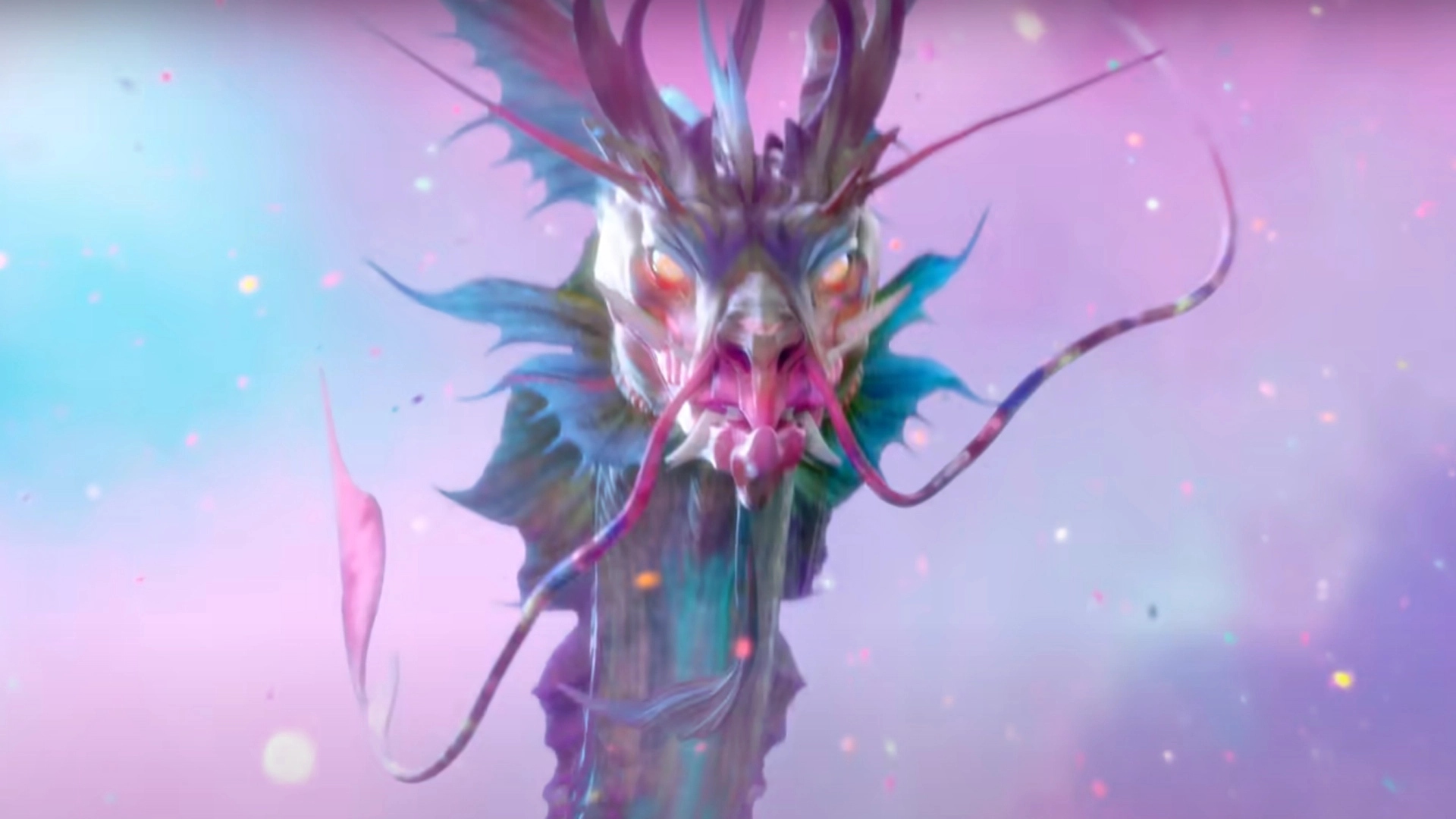 Guild Wars 2 is regarded as one of the best MMOs around for its single-player storyline, deep lore, and achingly pretty open-world. Every new area you come across is brimming with interesting stories, quests, and rewards, and they all feel genuinely alive in a way that very few MMOs are ever capable of delivering.

That originality and attention to detail bleed over to its enemy design, especially when it comes to its dragons. Whether it’s wyverns, drakes, or the Elder Dragons, all of Guild Wars 2’s winged reptiles feel like a part of the world, with storylines and histories of their own. Their status is imprinted on the land of Cantha, so when you eventually face them on the battlefield it feels like a momentous occasion.

Throughout the game’s history, some of these fights have changed to grow in complexity, Teqatl the Sunless being one of the larger adaptations. While Teqatl was somewhat formidable at launch, players adapted to killing it quickly and the giant Lieutenant of Zhaitan the elder dragon morphed into a much tougher fight requiring greater coordination between players. Now, each new story arc and expansion of the Guild Wars 2 story seems to introduce a new dragon to fight (or sometimes befriend). Now that Guild Wars 2 has mounts for players to ride on, you can even fly a draconic Skyscale around Tyria as well, though it’s nowhere near as scary as an elder dragon.

There you have it, the best dragon games on PC. Dragons have long been the face of fantasy monsters and for good reason. These epic-sized creatures make for equally epic encounters in just about every one of the games you can find them in. Whether you’re facing them toe to claw or strapping a saddle on your fire-breathing friend, dragons make just about every fantasy game just a bit more grand.