As with so many other important things in life, finding videogame Easter Eggs takes work and patience. Reading game files, browsing lines of confusing code, searching every inch of a level, and reading into a developer’s cryptic messages are just a handful of the ways that gaming Easter Eggs are unearthed. Blind luck is another.

Luckily, you can kick back and relax this Easter holiday as there are plenty of dedicated players out there who’ve already done all the heavy lifting and found dozens of gaming secrets. And on top of that, we’ve now gone and compiled all of our favourites into one list, tied it with a pretty bow, and decorated the whole thing with some of those weird, fluffy yellow chicks. They’re creepy, but apparently traditional and warranted, so who are we to argue?

In the list, we’ve mixed some classic Easter eggs with a basket of more recently discovered ones. As such, you can expect the secrets of Aperture Science labs, Bigfoot sightings in Grand Theft Auto, the painting that slipped by Hitman players for two years, a Wolfenstein demake, and many more.

If you’re an avid Easter egg hunter yourself then let us know what else should go on this list via our Facebook page or Twitter. So, without further ado, let’s crack on with our list of best gaming Easter eggs on PC. 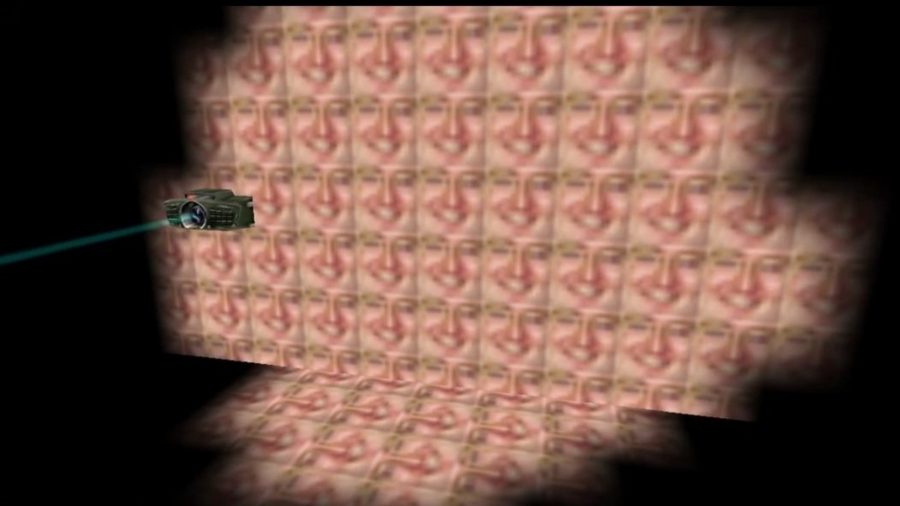 Gabe Newell’s face has popped up in some weird places. It’s been used to sell underwear in China, the Valve office has a floor-to-ceiling picture of the Lord Gaben meme, and Gabe’s face has also been used in a Half-Life Easter egg.

The Gaben Room is a reverent, holy space in which every inch of the walls, floor, and ceiling are covered in the same picture of Newell’s mug. When you first enter the room it’s completely dark, but switching on your suit’s flashlight reveals the full majesty of the space. There they all are, hundreds of Gabes gurning back at you. If you want to see the room in all its creepy glory you can find out how to access it here. 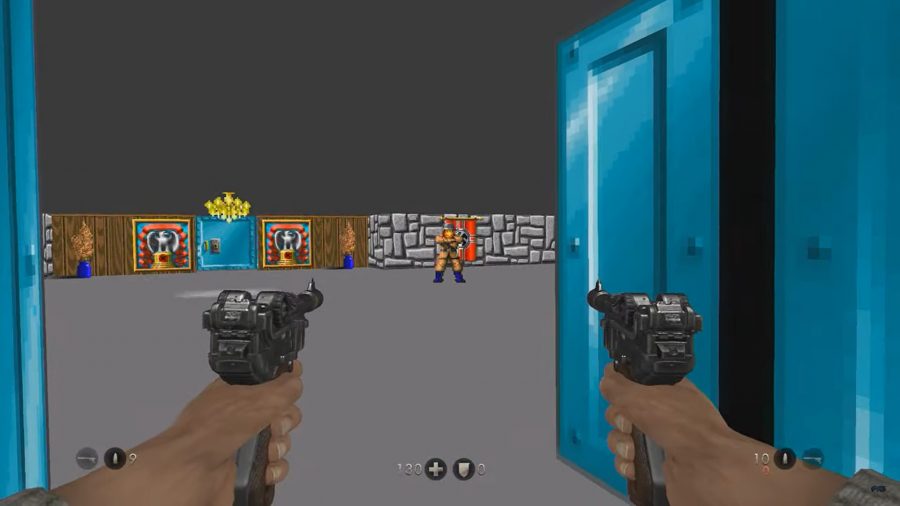 This ones for sleepy people – the kind who insist on resting in between bouts of saving the world. Once you find yourself at the safe house, bleary eyed and covered in sweat and the blood of your enemies, have a look around for a dirty mattress on the floor. Yes, it sounds like any student night, but in fact it’s your ticket to play a level of Wolfenstein 3D in The New Order’s engine.

Blazkowicz retains his modern model, along with some pickups, but everything else looks like a hyper-focused version of the original. It’s one of our all-time favourite nightmares. 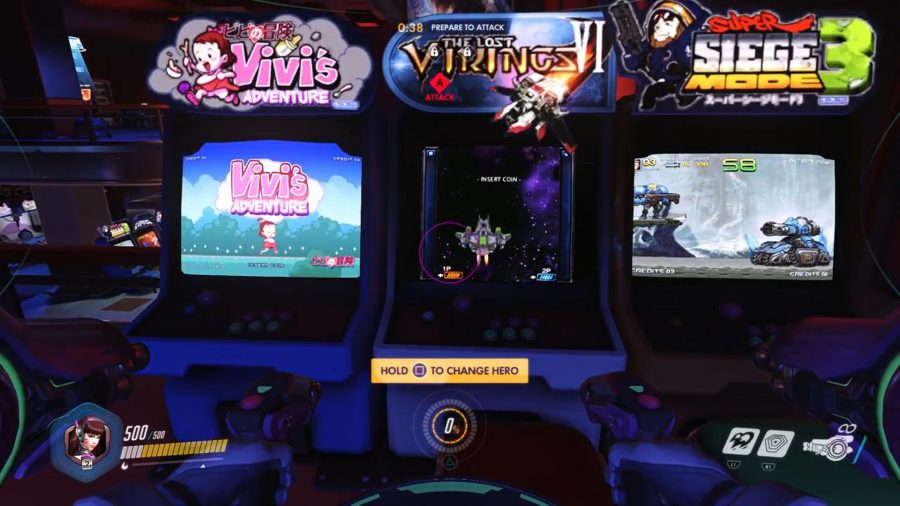 Head inside the Hanamura arcade and you’ll find it chock full of shiny game machines sporting names that sound somewhat familiar. Fighters of the Storm is very clearly a mash-up of Blizzard’s MOBA and arcade classic Street Fighter (you may have heard of it). On the cabinet’s screen you can see Tychus facing off with Tyrael, or head over to look at the sequel for a showdown between Kerrigan and Garrosh.

Elsewhere in the arcade you’ll find Soulstone, featuring Diablo characters, and Super Siege Mode 3, where you can see the StarCraft siege tank in action – it looks quite a lot like a Metal Slug boss encounter, in fact. And, as a nod to those now hazily misremembered pre-Warcraft days, you can also find machines playing The Lost Vikings, which is a swish-looking reboot of a game Blizzard made back when they were known as Silicon & Synapse. 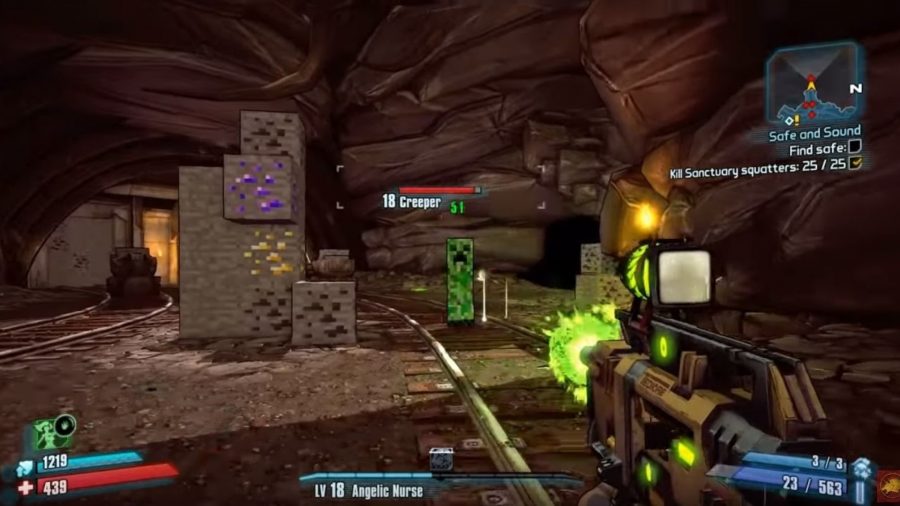 While navigating the vast network of tunnels that make up Caustic Caverns in Borderlands 2, you may happen across a secret cave harbouring an explosive Minecraft Easter egg inside. Keep your peepers peeled for a blockade built from what should be familiar-looking cubes. Break through it and you’ll find a cavern filled with creepers. Jeepers, creepers!

Murder the family of hitherto harmless creepers who were just trying to live out their lives, and you’ll get you some cute Minecraft-themed loot for your Borderlands character to wear. The senseless killing was worth it after all! Talking of senseless killing, there’s another, smaller Borderlands Easter egg for Game of Thrones fans in the character of Prince Jeffrey – a reference to marauding charm plug King Joffrey. You even get to set your inner Sansa Stark loose and slap that boy senseless. 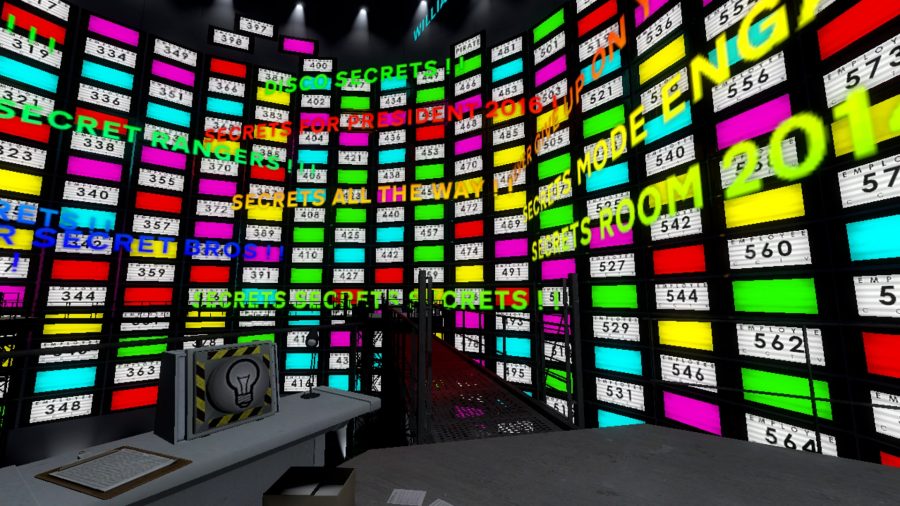 Seeking out all the different endings and hidden achievements in The Stanley Parable is a substantial task. But even if you think you’ve absolutely licked it, there’s one secret you might have missed.

After activating the elevator button in the Monitor Room, hang back and wait around for a minute. After a short time the button will light up again, press it and the monitors will start flashing, the catwalk will light up, and ‘Who Likes to Party’ by Kevin MacLeod (a man who understands music but not basic grammar) will start playing. Whatever else you think of them, the suits who worked for Stanley’s company certainly knew how to let off steam. 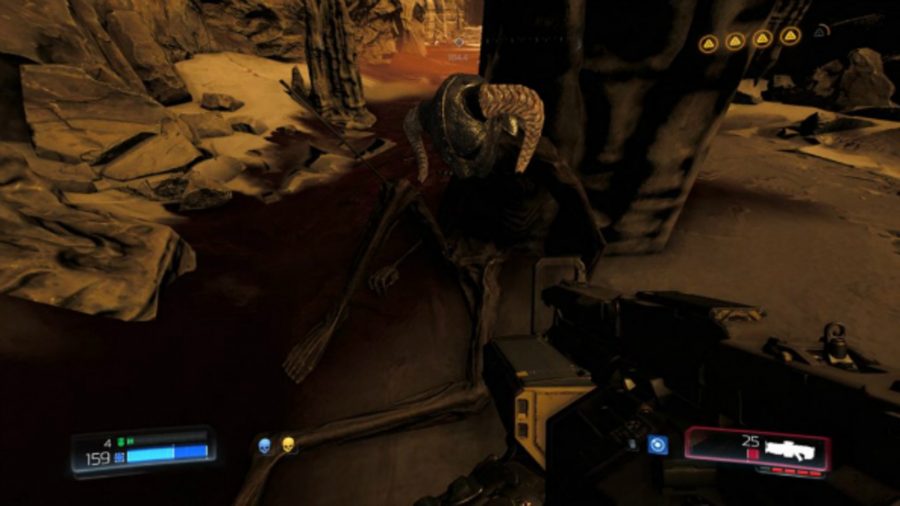 Doom – an adventurer with an injured knee

Yes, it may be a bit 2011, but it seems that Skyrim’s infamous ‘arrow to the knee’ meme lives on in Doom. For those of you who missed this ‘great’ moment in meme ‘history’, one of the most famous lines of stock dialogue in Skyrim sees a guard reminisce about having once been an adventurer, before he took – yep. And this became a meme phenomenon because, well, memes.

Maybe the joke here is that the once-great meme is now long dead, doomed to burn in the fires of hell for all eternity, never to resurface? We’re onboard with that, but perhaps we’re reading too much into it… 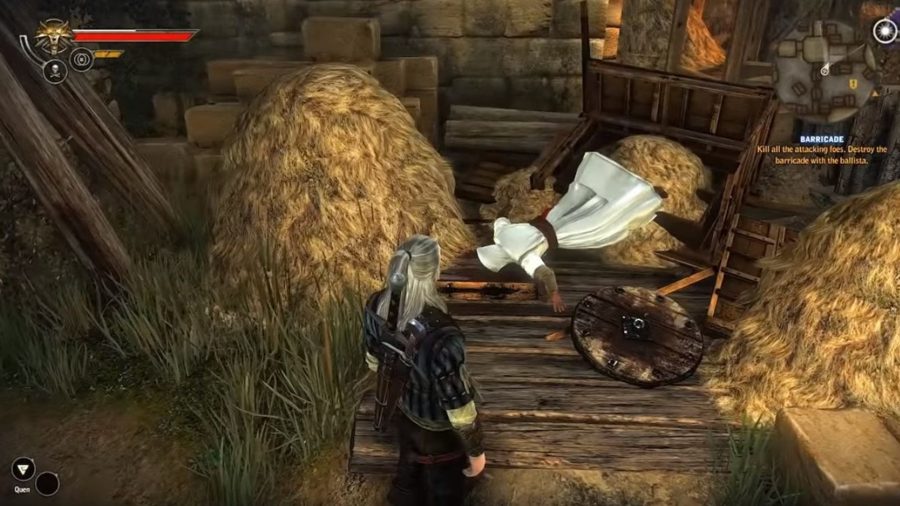 The Witcher 2 – Altair dead in the hay

Jumping from incredible heights into the unrealistic safety of compacted hay bales is one of many highlights in the Assassin’s Creed series. But if you insist on repeatedly risking your life it’s bound to catch up with you eventually. Let this The Witcher 2 Easter egg serve as a warning of what could happen to you.

During the Ballista section of the prologue, take a quick break from the action and rifle through the hay. You’re not looking for a needle, but instead a dead body wearing a white smock. This corpse is a reference the protagonist Altair, from the first Assassin’s Creed game, who has jumped his last. Silly lad.

When you find Altair you’ll receive a bonus for the assassination attribute which grants you a buff when attacking an enemy from behind – at least something good came from his death. 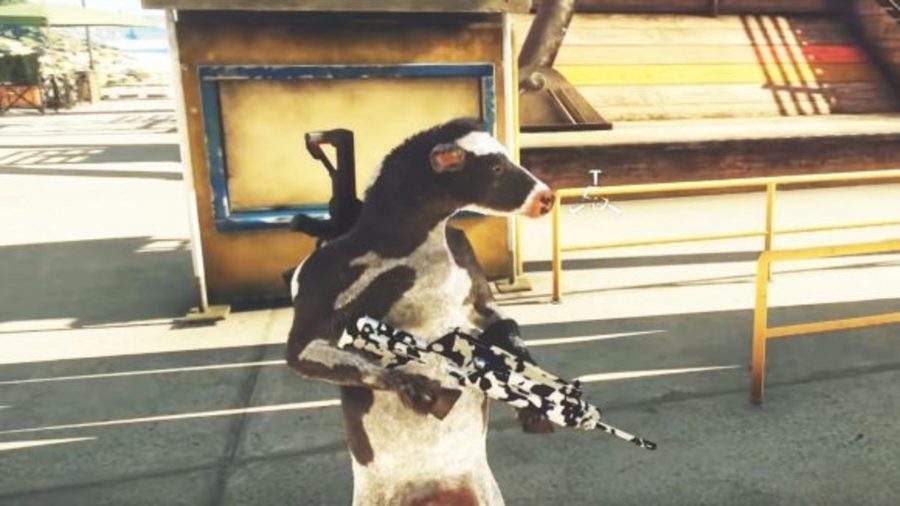 Just Cause 4 has its own special approach to weaponry – and, indeed, reality – so it’s disquietingly unsurprising to discover that the game features a gun which lets you turn NPCs into cows. Once bovined, they just carry on with their business as if nothing happened.

Cow NPCs can still ride motorbikes, control tanks, and shoot you with guns, so beware! Just Cause has other fun Easter eggs including turning the game into a parody of A-Ha’s ‘Take On Me’ music video and a hidden secret lets you play a version of Bennet Foddy’s Getting Over it. 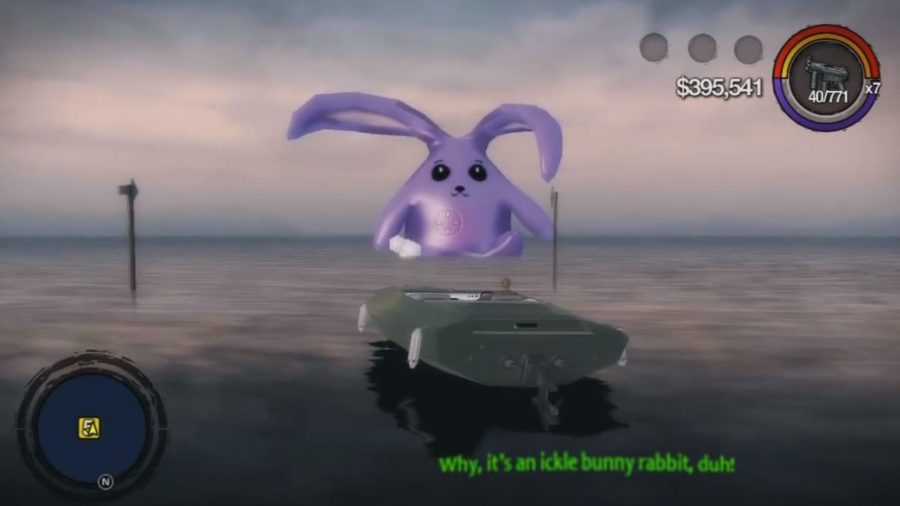 The Saints Row series is as bombastic and bizarre as games come and its Easter eggs are just as ridiculous. To find this particular Saints Row 2 example, you must venture out to a hidden island by boat.

After wandering around near the coast for a bit, a giant purple cartoon rabbit will slowly rise up from the ocean like a monster from the deep. You can drive up to the colossal beast in your boat and it just sits there, its huge loveable eyes just staring out into the distance. The Cabbit Easter egg also makes an appearance in Saints Row: The Third, and again in Saints Row IV, if you fancy doing it more than once. 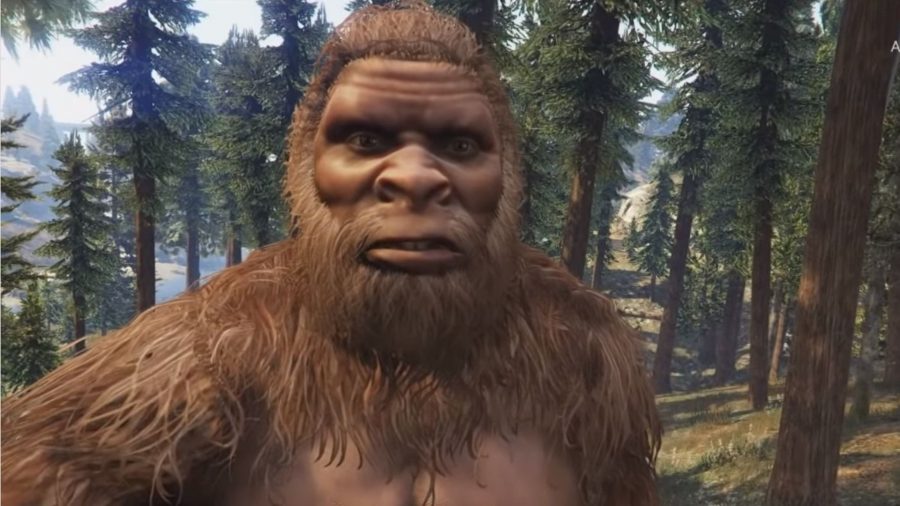 There are so many GTA V Easter eggs, but the one that lets you play as Bigfoot will always hold a special place in our hearts. What started as the golden peyote mystery made fans delve into the game files. They discovered that, after completing a set of tasks, they could transform their character into a sasquatch. And why wouldn’t you?

GTA V’s Bigfoot Easter egg is special in that it captures the mythos and detective work that can go into hunting for digital Easter eggs – which is one of the reasons we love them so much. 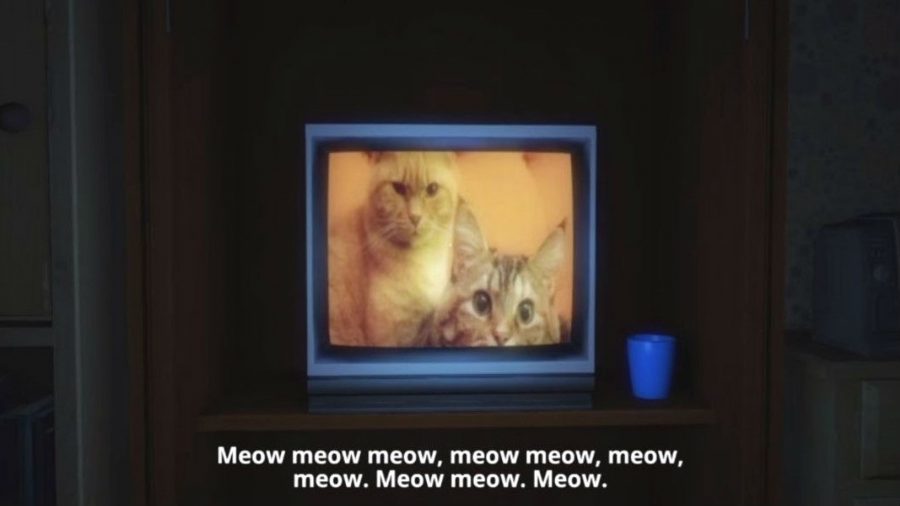 When exploring the house in Gone Home you’re guided through the story via journal entries, letters, and documents about the somewhat dysfunctional Greenbriar family and their messy lives. But there’s one family member’s input that you might have overlooked.

To fill in this gap in your knowledge, you need to dunk the purple basketball from the garage rafters into the basketball hoop in Sam’s room. This will activate a journal entry written and spoken by Mitten, the family cat, and a cute kitten-filled slideshow will play on Sam’s TV too. Aww. 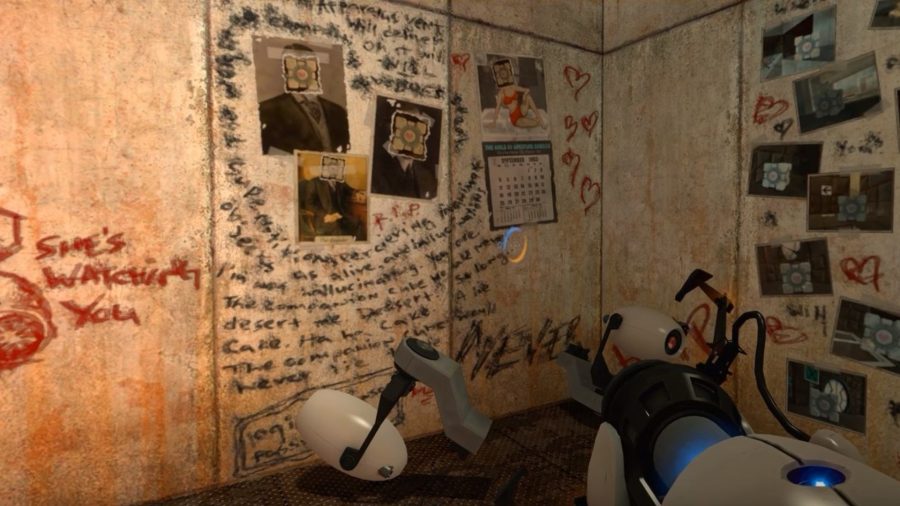 The Aperture Science labs look clean and clinical but behind the walls are abandoned rooms and dirty hallways, not to mention many Easter eggs (given the filth, though, we would advise against putting any near your mouth). Hidden away behind the laboratories are a multitude of secret dens, their walls covered in scrawled writing and cryptic diagrams.

The person behind these rooms is a scientist called Doug Rattman who, after being trapped in the science centre, went mad and started painting murals, diagrams, and phrases like ‘the cake is a lie’ to warn Chell about the true nature of the facility. Doug Rattman has become a legend within the Portal series, getting his own spin-off comic, and a much larger part in Portal 2. It sounds like things are getting better for him, then. 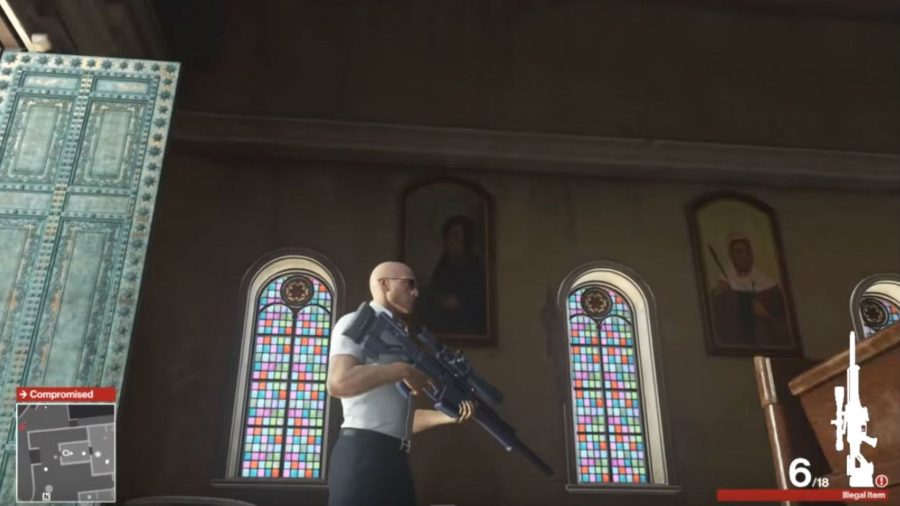 In the Sapienza level of Hitman 2 there’s a striking painting hanging on the wall that remained unnoticed for some time. On closer inspection, the painting is a nod to the disastrous Spanish restoration of a painting of Jesus in 2012 – you know, the one that became a meme. It’s difficult to see clearly as it’s lurking in the shadows, .

A user interface designer at developer Io, Mortan Elgaar, confirmed the Easter egg in a tweet and highlighted that the painting went unnoticed by fans for two years until one of them decided to take a closer look.

There you have it, that’s our list of the best gaming Easter eggs on PC. You can go back to eating your weight in chocolate now – that’s what we’ll be doing.