I’ve always liked the message that looms up beyond the splash screens every time you start an Assassin’s Creed game. “This work of fiction,” it disclaims, “was designed, developed and produced by a multicultural team of various religious faiths and beliefs”.

It’s a warning born out of fear of lawsuits; a ritual scrubbing of hands designed to curb any unnecessary excitement. But it has the opposite effect. Like an ‘18’ rating to a new teen, it promises boundaries crossed and statuses un-quoed – “Here be creative risks and bold experiments in game design,” it says.

Maybe the series lost that excitement somewhere in Italy, but it clings to Black Flag like crustaceans to the Jackdaw. That sense, of creative cowardice turned to daring, high concept ends, runs through it like Ezio through Florence. 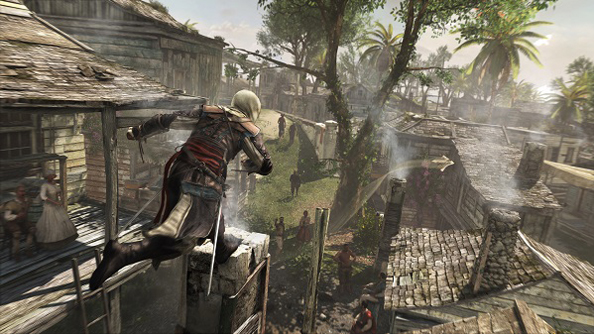 It takes a couple of hours in Havana, letting series veterans adjust to the shore before they set out to sea – but once Black Flag lets its systems breathe, it unfolds. It offers itself up to its amorphous ocean, opening Ubi’s distraction-driven open world model to new dynamism and occasional moments of quiet.

Is it folly to compare an Assassin’s Creed game to Elite? If not that, then it’s Freelancer disguised by sea legs: a series of compelling A to Bs driven as much by personal whim as narrative thrust, invariably interrupted by random battles or storms (the ocean’s asteroid fields).

The two games feel like one. As usual you’re navigating undulating terrain, with one eye on the minimap for the wandering eyes of the authorities. But the sea is not so in thrall to the player as the land. It sinks ships you’d rather have boarded, and rogue waves will sink you too if you’re not careful. 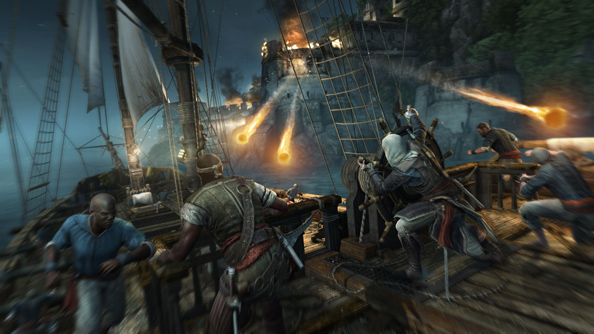 When I think of sailing in Black Flag, I think of Travel Mode – when the camera pulls you way back, and lets the wind bend around your ears. Third-person power fantasies like these are as much about circling and admiring your avatar as they are playing them – and Black Flag recognises this, makes your ship a point of upgradeable pride. That said, bellowed sea shanties are just one way in which your ship and crew come to feel not like an avatar to be steered with wasd, but a broiling mass of people with morale and misgivings. Your control isn’t a given, but a privilege.

Maybe what I like best about hiking up one wave and slipping down the next in the Jackdaw, though, is what I’ve dubbed big-fish, little-fish syndrome. Through Kenway’s telescope you size up the ships, checking their cargo against your mental upgrade map. Then you state your business by sinking your target’s gunboat escort with mortar fire, and pull the sails tight to ram the frigate while it’s still flailing. Within seconds you’ll have boarded, making good use of your pistols in a cramped space swarming with sailors – but what’s this?

A Man O’ War – an angry city with sails – rolls purposefully across the waves. And you’re outta there: reduced from sea-king to sinking in the time it takes for the weather to change.

And what weather. Sometimes you get to watch it sit sulkily above the ocean, spitting lightning. The fog is that surprisingly rare instance where Black Flag allows itself to evoke Pirates of the Caribbean, pulling the ghoulish brigs and hulking landmasses disconcertingly close. Outside the animus, Black Flag is just as brave. Simply put, Ubisoft Montreal have taken what was originally an act of imaginative low self-esteem – to couch their historical authenticity in pulpy sci-fi – and reworked it into some of their bravest storytelling to date.

Freeing themselves of the precursors, the apparent alien refugees of Mass Effect who popped in every 10 hours to bloat ACIII with unnecessary pomp and numb end-of-the-world rhetoric, the Canadian contingent have replaced Desmond with a new employee at Abstergo Entertainment – a game development offshoot of the villainous corporation, based in a swish Montreal office like that of the publisher’s most populous studio.

Your meta-job is to sell the thrills of the animus as a sort of DNA-powered Oculus Rift – and your meta-bosses agonise over the task of ensuring their ‘players’ won’t be bored, fudging history in the name of fun. 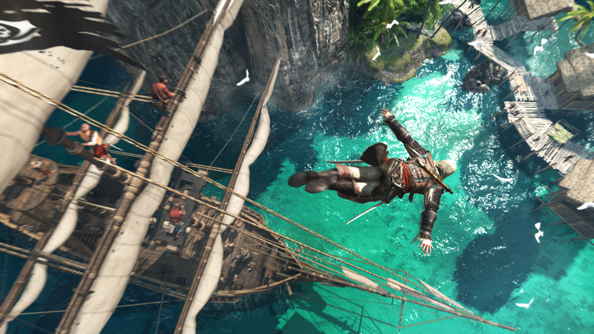 They say write what you know, but it’s remarkable that Ubi would greenlight something so close to the bone. Posters of Black Flag’s key art adorn the walls, and Abstergo company history references Ubisoft by name. Let me make that clear: in AC canon, the publishers have allied themselves with the Templars.

Have I mentioned the absurd production values? I adore the cr-cr-crack of the cannons, and the turtles pulling their heavy shields along the sand.

Lest we forget, this game is the work of eight studios across many timezones, produced in a little over the time Call of Duty: Ghosts and Battlefield 4 were. Its cohesion, polish and considered beauty make it a triumph of communication, aside from anything else.

Explicitly and otherwise, Black Flag is a game about freedom, and that’s really what it’s all been about for me. For once when I sit down to play a game, I get that sense my world is opening up, not tightening in.