My game of 2013 is Papers Please, because whenever anybody who doesn’t play video games asks if I’ve been playing any interesting video games recently, “yes I have, I have been playing a game called Papers Please” are the words that I nearly always say. And when they ask what the game is about, they actually seem somewhat interested in my explanation instead of slinking further and further into their own brains. So that’s good.

Papers Please is a game in which you play a border control agent, manning a heavily secured checkpoint between two fictitious states reminiscent of post-war Berlin. People wishing to enter the country sidle up to your desk one by one and present their papers, at which point you must check that their details are in order before either stamping a big green ‘APPROVED’ stamp or a big red ‘DENIED’ stamp.

Each day, the restrictions on who can enter your country and what paperwork they require become increasingly convoluted. In the beginning the rules are simple enough, people from certain nations must be turned away, all foreign travellers require entry permits, things like that. But soon, the confounding bureaucracy of your unseen government demands half a dozen scraps of paper be presented upon arrival at your desk: passports, visas, work permits, access permits, vaccinations, special dispensation for foreign dignitaries. Full body scans become available for entrants whose paperwork doesn’t match their physical description — a mismatched weight might mean a thigh strapped full of narcotics — while fingerprints can be taken to corroborate psuedonyms and aliases. 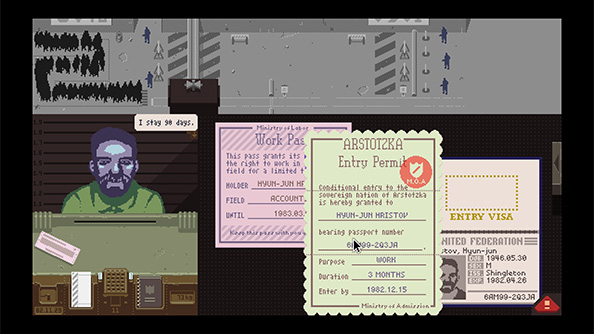 That’s essentially how your desk job proceeds, with a series of randomised entrants queuing to seek passage across the border, mixed in with some pre-scripted entrants dropped into your booth to test your moral fibre. Your income is based on successful management of each entrant, correctly turning them away or allowing them entrance in accordance with their completed paperwork. That income is then spread thinly over the needs of your impoverished family. Rent, heat and medicine stave off the very real risk of your son, wife or mother-in-law falling ill and perishing, so unwaveringly adhering to the letter of the law is in your best interests. Do your job well or people die. Don’t make other people’s problems your own.

But when a man fleeing his own country with the correct paperwork mentions that his wife is just behind him in the queue and asks that you look after her, only for her to show up confused and holding a barely expired entry permit, what would you do? When a government official and paymaster orders you to look the other way when his lover arrives at the border without the correct visa, do you bend the rules then? Even if you decide from the outset to leave your morals at home, to be utterly robotic in your decision making, to become an unfeeling extension of the vascillating will of the government, Papers Please will find a way to test that resolve. The growing piles of paperwork become a plain logistical challenge too, slowing you down and chipping away at your paycheque. 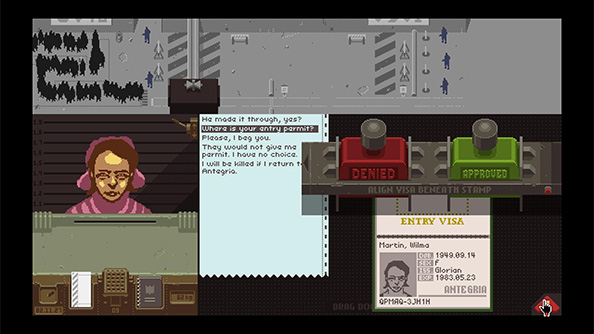 It’s unrelentingly grim too, a dull parade of sadness through a bleakly monochrome checkpoint. People standing in the queue appear as a winding ribbon faceless silhouettes, most of whom will never reach the border before the siren signals the end of the day and they’re all sent home. The daily newspaper broadly paints a depressing picture of the wider world. Then there’s a sense that you might be the bad guy, cruelly denying refuge to innocent people who simply failed to keep up with incomprehensible legislation, whose only crime is being a bit crap at filling in forms. On the other hand, it’s really good fun stamping DENIED on a passport. You can stamp it right on their stupid faces. DENIED DENIED DENIED. GET OUT. Papers Please really speaks to the latent xenophobe in all of us.

Few games can jab a mind-fork into the emotional centres of your brain as effectively as Papers Please. Your interaction with the world is so limited, but the impact of your decisions, and just how contorted the feelings informing those decisions can become, are huge. The game demonstrates how readily you will reduce humans to data points, how your unending quest for efficiency leaves you cold to their pleas. You sit in your booth, working your day job. They arrive at your desk, their entire lives in the balance and about to be utterly changed on your whim. It’s a game, but would you act any different if you really found yourself in that seat? 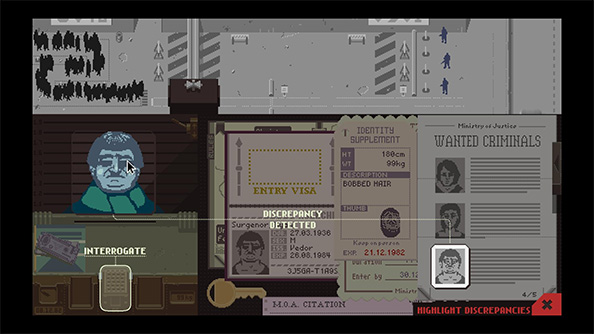 Papers Please never invites you to abuse your position of authority but gives you plenty of opportunity to do so. And as the game progresses you move towards impossibly complex rules and converging story threads that force you into making tough decisions, pitting your jobsworthiness against your humanity. It’ll spit out dozens and dozens of different endings depending on the decisions you make too, which acts more as a means to make your experience different to that of a fellow player rather than a bunch of narrative routes to go back, replay and explore. The game’s a little too long for that.

So that’s the most interesting experience I’ve had playing a game this year. Of course it’s come from an indie developer, because only broke people with imaginations create anything worthwhile. Go play Papers Please and then tell somebody who doesn’t play games all about it, and watch how quietly amazed they are that there are games not about shooting terrorists in the face and head. Magical.