I was singing within the first fifteen minutes of playing Saints Row IV. Riding an airborne nuclear missile, belting out Aerosmith’s ‘98 classic “I Don’t Want to Miss a Thing”, my compatriots below bidding a final farewell to their fearless leader.

It probably sounded horrible. Not only because I’m completely tone deaf, but because I was also bellowing with laughter.

Volition’s fourth and best open-world caper is a comedy masterpiece, managing to lampoon countless movies and games without missing a beat, and while it didn’t exactly break any new ground with its mechanics or design, fun as they were, it’s earned its spot as one of my Games of 2013 because it’s so unrelentingly funny. 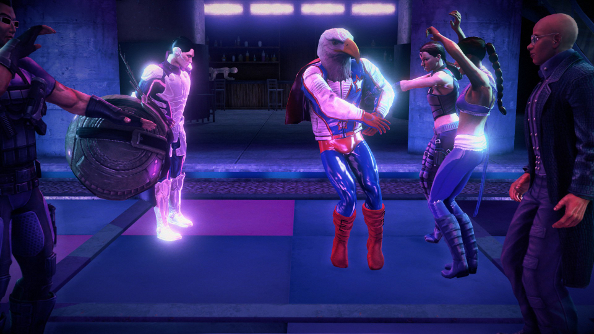 Saints Row IV is essentially a theme park, constantly throwing new things at the player, be it a completely insane mission involving the use of stolen telekinesis powers where you throw people, objects and giant stuffed animal heads around the city to rack up points for the amusement of an intergalactic dictator, or yet another digital realm to play in, like a Pleasantville-style suburban nightmare or an underground bunker that screams “I’m a Metal Gear Solid mission!”, complete with cardboard boxes.

It’s a series that started off as a poor man’s Grand Theft Auto, but led to leaping over the tallest buildings, attacking glitching citizens with tentacle swords, fighting mechs on a spaceship, and dressing up as an eagle crossed with Evel Knievel who can kick so hard he causes a nuclear reaction.

It would be easy to write Saints Row IV off as appealing to the lowest common denominator, mocking easy targets and often devolving into plain silliness, but Volition’s commitment to the absurdity raises it to new levels of ridiculousness, piling on layers and layers of meta-gags and in-jokes. There’s even a voice-pack simply named “Nolan North”. 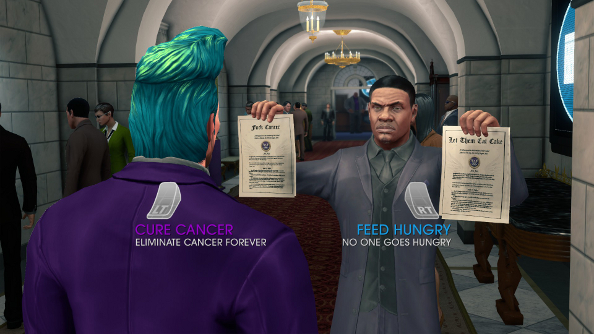 Take Keith David, veteran actor and frequent voice actor, who stars not only as himself, but a version of himself who has now become the Vice President. Now, having an actor playing himself in a major game role is amusing on its own – especially when he’s already lent his vocal talents to the series before in the guise of the original Saints Row’s naughty Julius, which is frequently mentioned by other characters. But then when you add in the fact that David co-starred alongside Roddy Piper in They Live, the ‘80s cult classic which also serves as one of the game’s inspirations, and then get to witness David and Piper brawling in a scrap reminiscent of They Live’s famous fight scene, hailed as one of the best movie fight scenes ever made, the whole thing becomes spectacularly clever.

Open-world romps so often overstay their welcome, and while I might have once been more than happy to spend a hundred hours or so with one game, deadlines and general adult business usually means that I’m relieved when a game finishes and I can move onto the next one. Not so with Saints Row IV. When the credits rolled, all I wanted was more time. I’d finished all the side content along with the main missions, spent a good long time just mucking around throwing cars at people, but I didn’t quite feel ready to leave virtual Steelport.

I may just fire it up again.