Once you’ve built the best gaming PC, it’s time to spruce up your system with a bit of flair by adding some lighting. Hearing the term ‘RGB’ needn’t send a shiver down your spine, as it doesn’t just mean rainbow patterns and flashing lights, but the ability to thematically thread your entire setup together with your favourite colours and animations.

Stepping up from synchronising your keyboard and mouse, you can line the inside of your rig with lighting strips, attach them to your gaming desk, and stick them to the back of your gaming monitor for a healthy glow. There are even panels and wall lights you can use to brighten up the rest of your room.

Since all our suggestions use light-emitting diodes (LEDs), they consume such little electricity compared to standard bulbs that they won’t add that much to your bill regardless of whether you’re in the market for over-the-top illumination or lights that dance to the sound of your music. In fact, they might even be able to reduce your bill if you make them your default lighting.

Here are the best lighting kits you can buy: 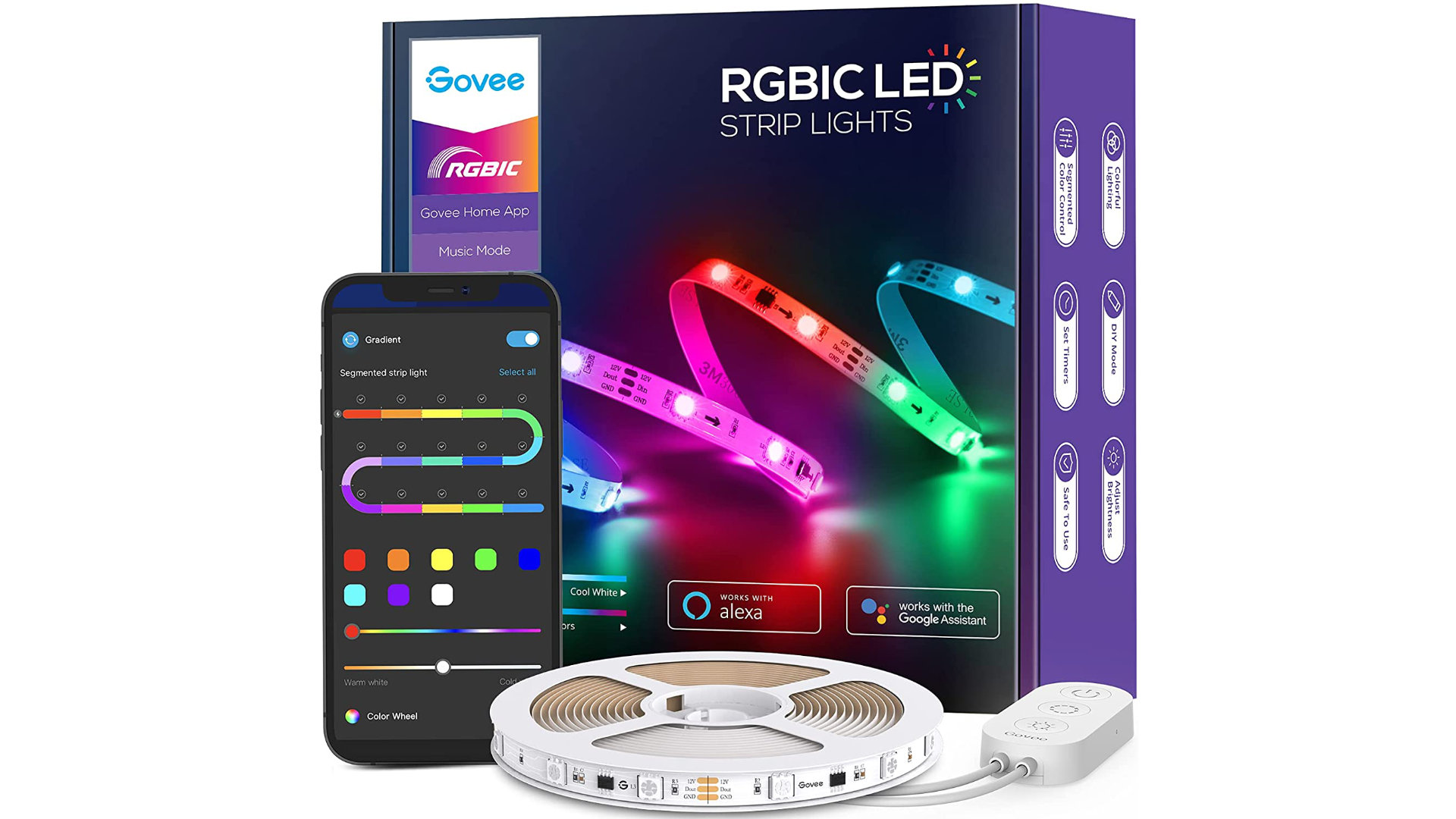 LED strip lights can be a confusing landscape, especially when Govee regularly releases similarly-named product refreshes. But this guide plays by Highlander rules as there can only be one, and the Govee RGBIC LED strip lights stand tall above the rest. You can either buy a single five metre (16.4ft) roll or a twin-pack for a combined ten metres (32.8ft), which is significantly more than competitors give you, while costing less. It’s worth keeping in mind that you can’t cut these to your preferred length, though, so plan accordingly.

If you’re wondering about the extra letters in its name, the IC stands for the independent control chip, which lets you customise each individual LED with vibrant RGB lighting. There’s a built-in controller to turn it on and off, switch between presets, and adjust the brightness, but the real draw is the ability to personalise it using the smartphone app or through voice controls using smart speakers. 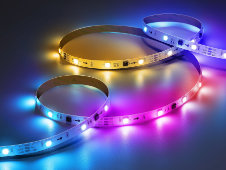 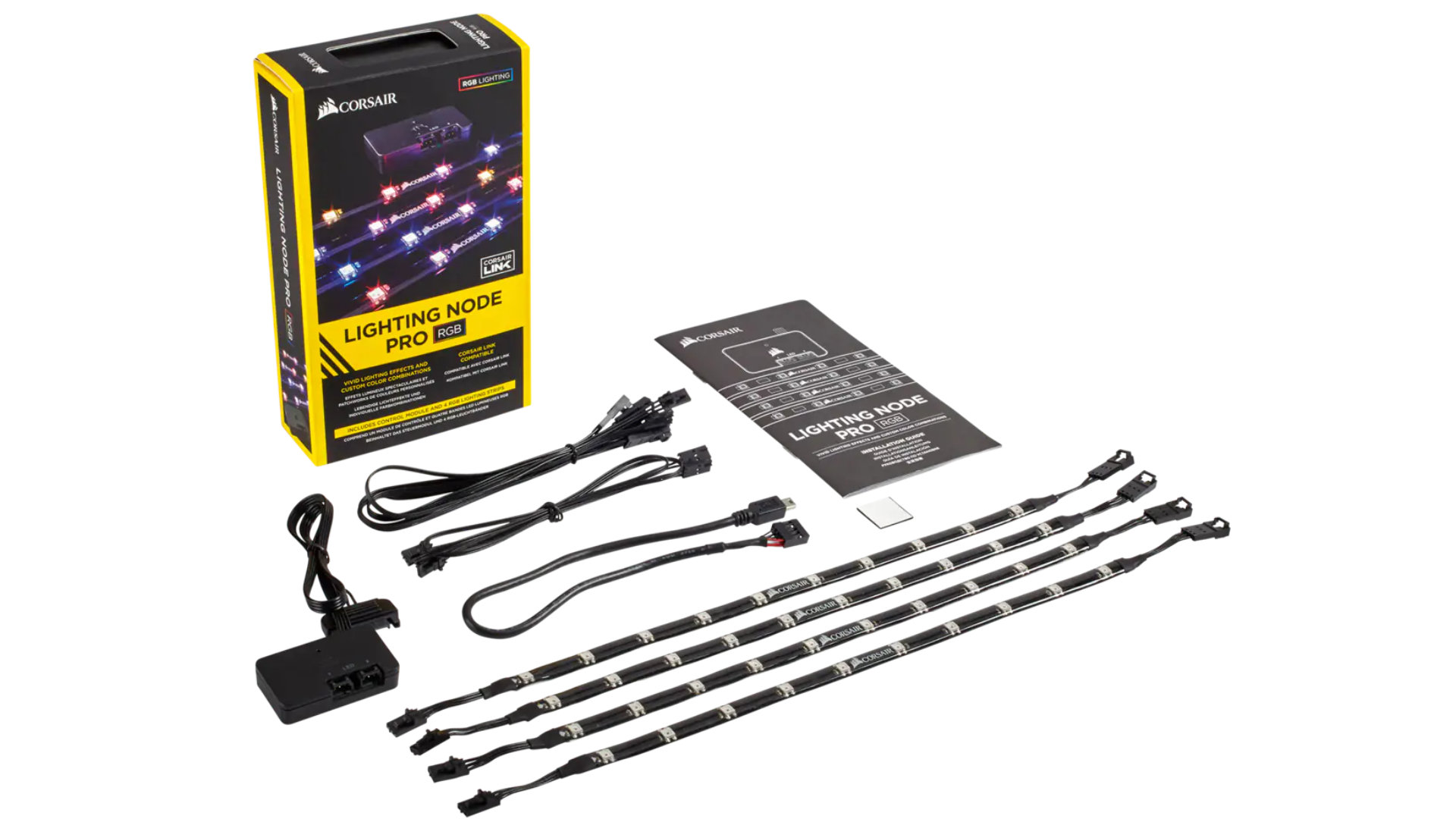 Most of the best PC cases feature a tempered glass panel so you can proudly display your graphics card and how well you manage cables. These components really take centre stage when you line your gaming PC with strip lights to illuminate the interior, and few are better than Corsair’s iCUE Lighting Node Pro.

It packs an RGB controller and four strips meant for each side of the case, and while this should be plenty, you can extend these with the LED Lighting Pro expansion kit. There are no smart controls here, but the iCUE software handles everything, letting you customise each strip’s 10 LEDs individually with a huge array of animations and effects. Better yet, you can synchronise your lighting with other Corsair products, like gaming keyboards and gaming headsets. 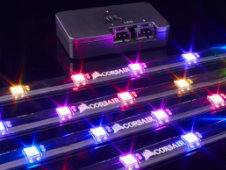 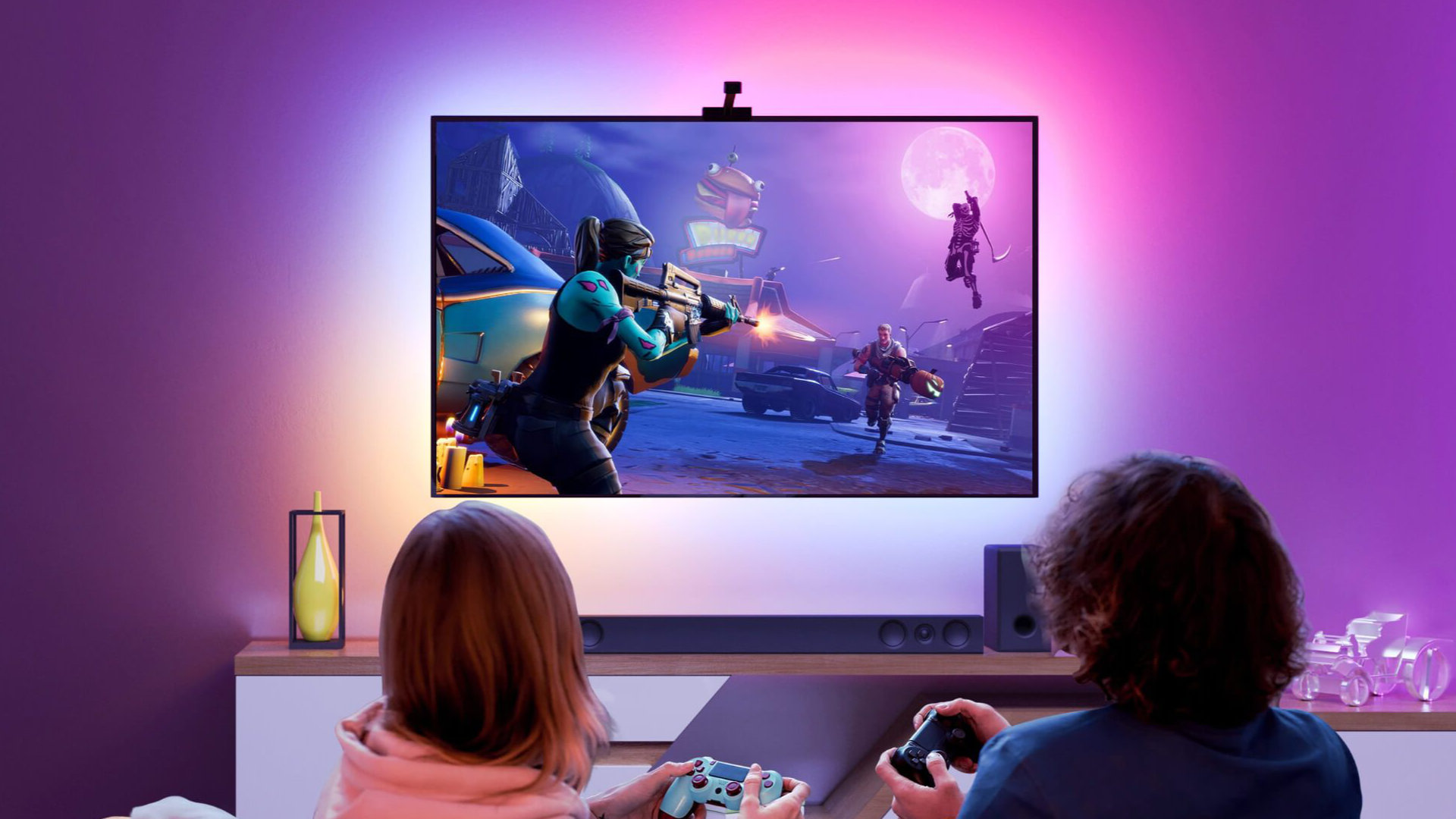 While Philips Hue helped pioneer interactive backlights for the display, Govee’s made it far more affordable without sacrificing quality. The Govee Immersion strip light packs 114 LEDs across 12.5 feet that you can individually control using the company’s proprietary RGBIC solution. It isn’t just a treat to watch but downright better for your eyes rather than watching things in the dark.

This model comes with a camera you can attach to the bottom or top of your display – don’t worry, it can’t see or hear you. This collects data to react to whatever’s on the screen for a more dynamic and immersive viewing experience. And since you can connect the Govee Immersion to your WiFi, you have access to a whole host of smart home controls. 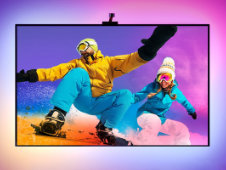 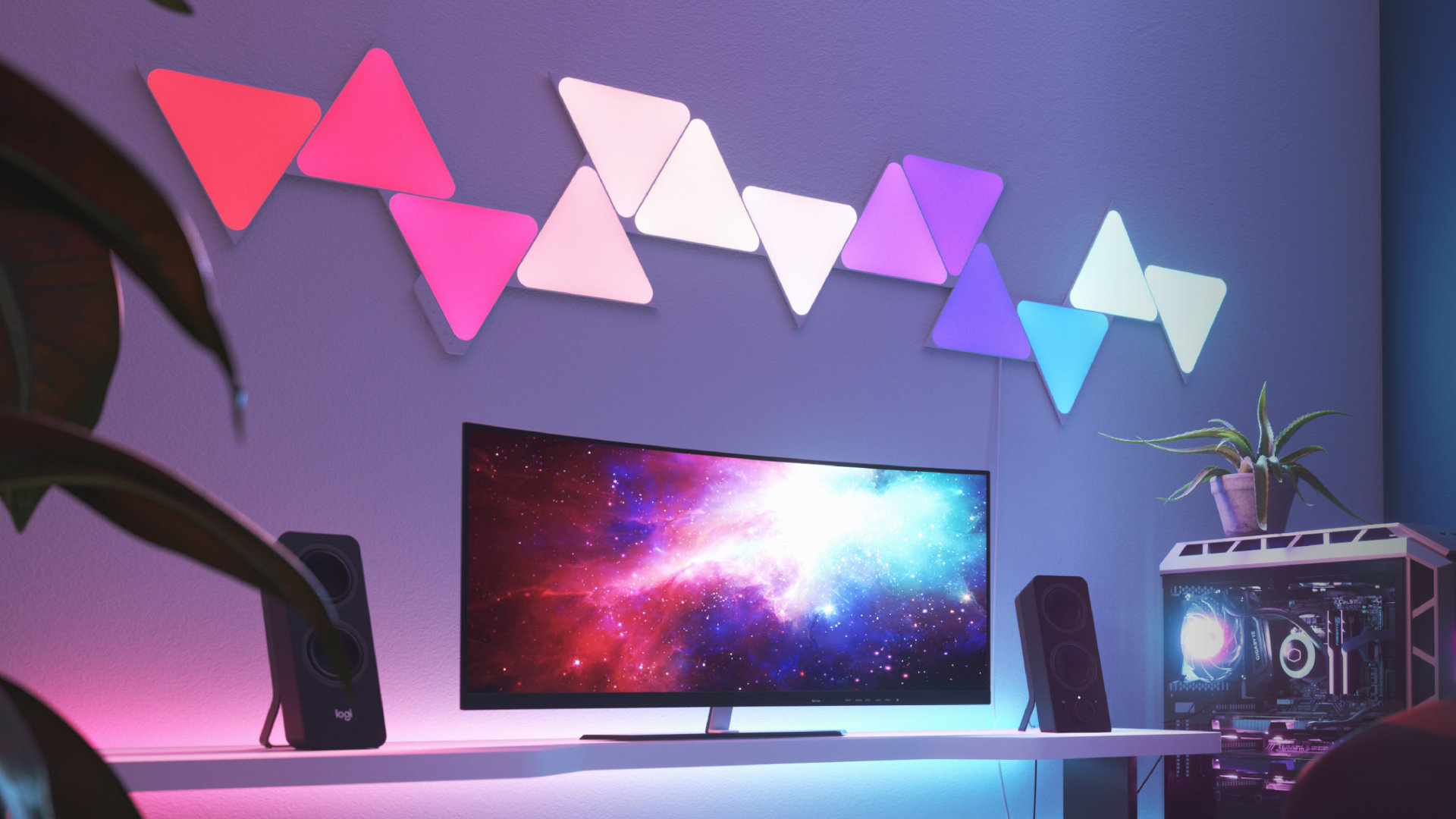 Appropriately named because they come in hexagon, triangle, and mini triangle panels, Nanoleaf Shapes sit on your wall in whatever pattern you can dream up with their modularity. You can even buy extensions to string together different shaped panels later down the line for a truly personal touch. The pictures don’t do them justice, either, as they’re bright enough to flood your whole room with light and offer up to 16 million colours to choose from – not to mention the custom animations.

One unexpected feature is that they’re just as good behind the best webcams as they are in front of it. Place them on the wall behind you and you add a splash of colour to your background, but stick them in front of you and you can use the built-in controller, the app, or the voice controls to switch the LEDs to white to light up your face during streams and video calls. Maybe you won’t need an Elgato Key light, after all. 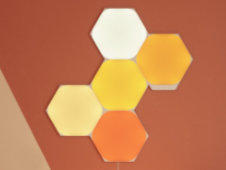 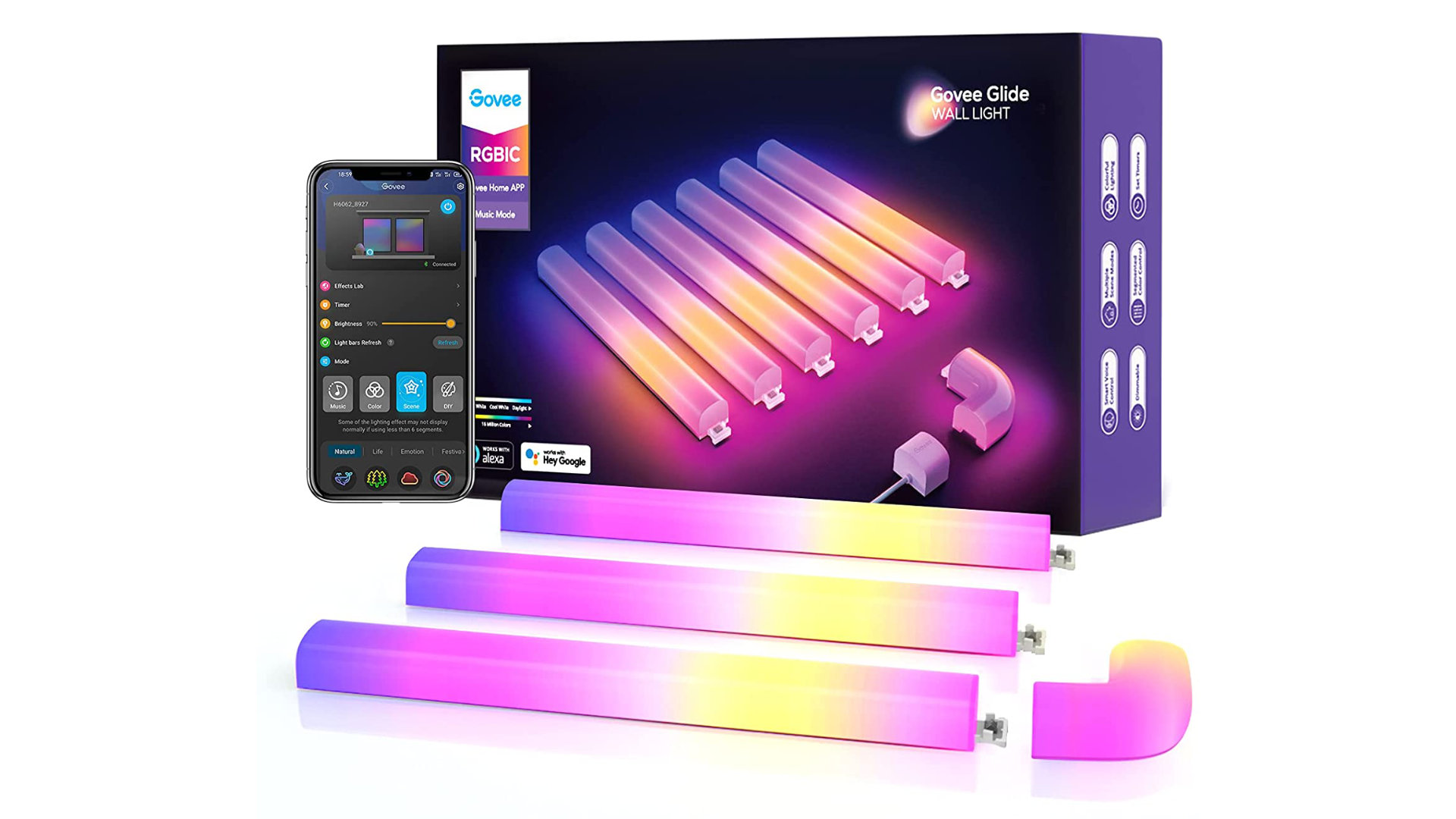 The best RGB LED wall hanging is the Govee Glide.

Neon bars are simple and sleek sitting above your display, but they’re not exactly a one-size-fits-all. Refining the concept, Govee’s Glide wall light comes with six modular bars and a curved corner piece, so you can make the light as long or as short as you like in an L or an I shape As usual, there are over 16 million colours to choose from and you can customise each LED independently using Govee’s RGBIC technology.

The smartphone app offers the most comprehensive controls, as it allows you to create your own patterns and fine-tune it to your liking. Once you’ve set everything up, you can use Amazon Alexa and Google Home voice commands to switch between your scenes hands-free. 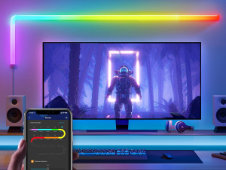 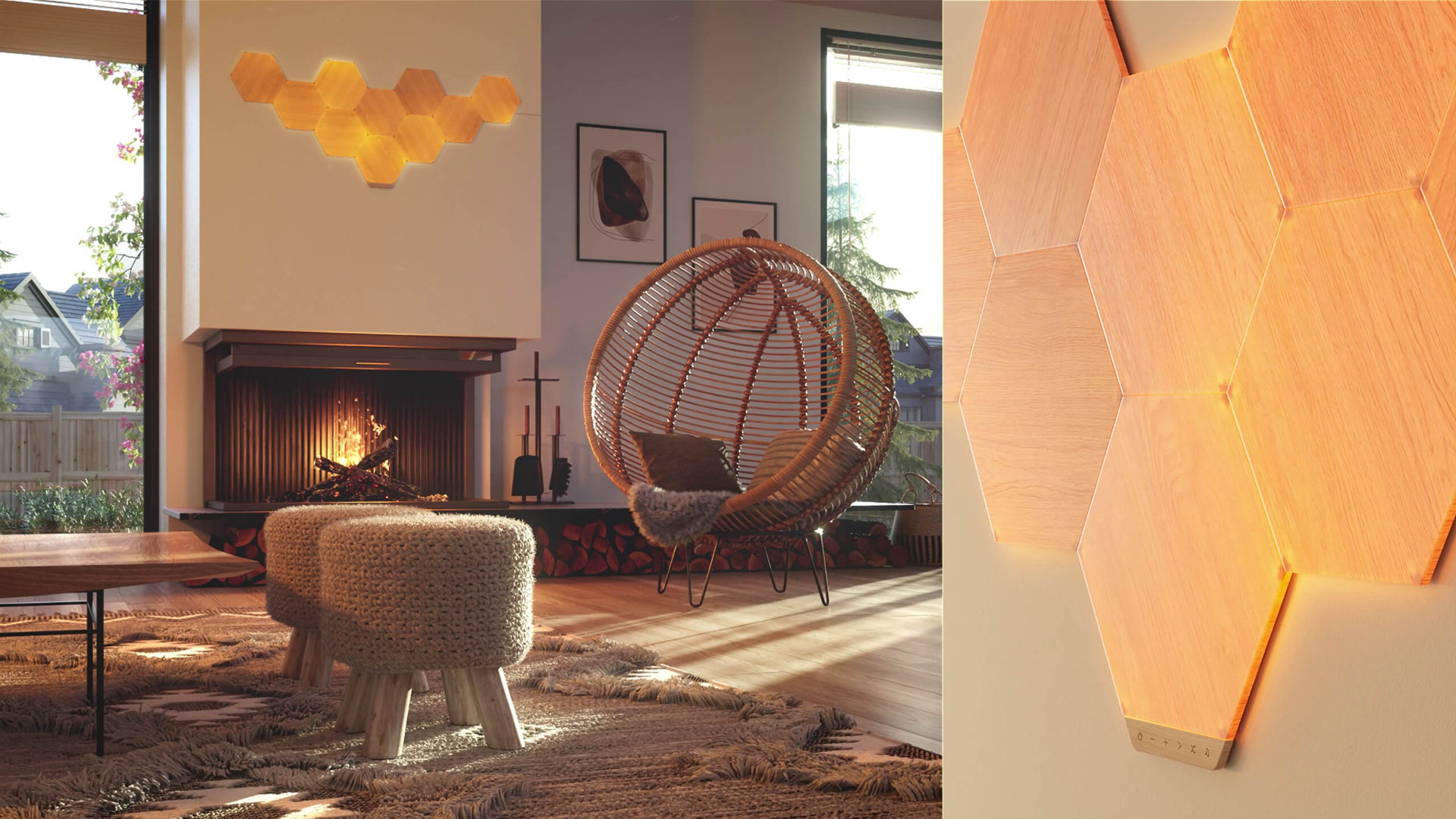 While Shapes are more contemporary, traditional rooms need a more organic touch. When switched off, the wood grain effect on the Nanoleaf Elements fit as seamlessly into living rooms, bedrooms, and offices as the frames around your photos. And when they’re switched on, they gently fill the room with soft lighting to create an unrivalled ambience.

Elements carry the same design philosophy as other Nanoleaf products, making them easy to set up and control – whether that’s via the optional panel attachment, the smartphone app, or through a smart speaker. The panels even react to your music, changing between different temperature whites of 1500K and 4000K. Our favourite is the ember animation preset that flickers like a fireplace because it gives a homely feel. 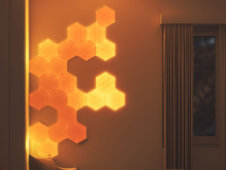 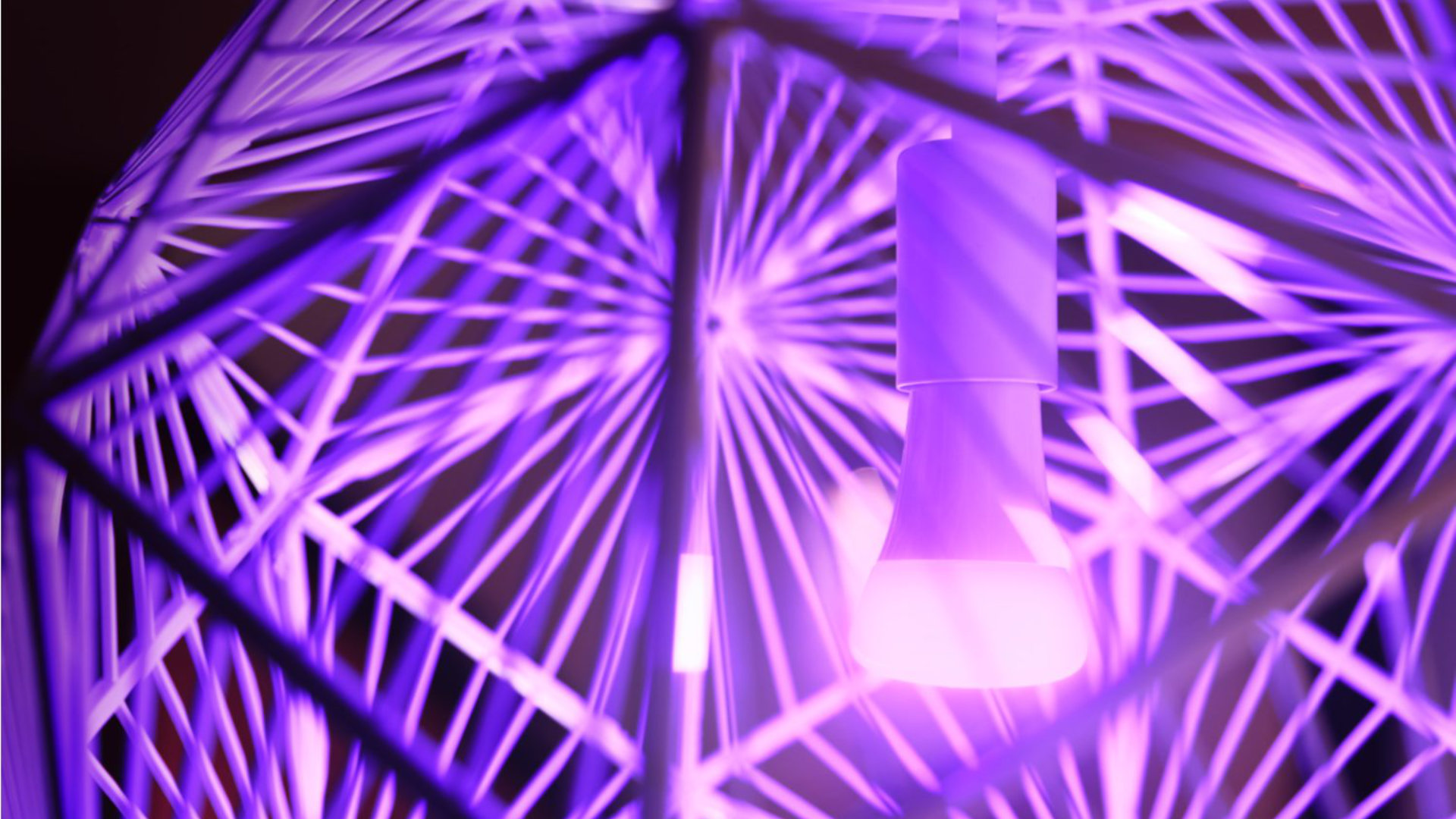 It wouldn’t be a list about lighting without the company that led the charge, and Philips Hue A19 bulbs are the best of the best. They feature all the usual suspects, including 16 million rich colours to choose from, voice controls, and a stress-free app that’s simple to use.

There are cheaper options around, but paying the extra here doesn’t just go towards a brand name, as you’ll get unrivalled connectivity, and a rated 25,000 hours (a whopping 22 years) out of them unless something goes wrong. You can even synchronise up to 10 Bluetooth-compatible Hue smart bulbs using the free app, and up to 50 when you grab the optional Hue Hub that’s sold separately. 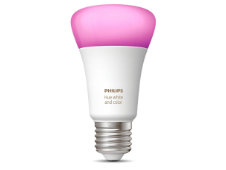 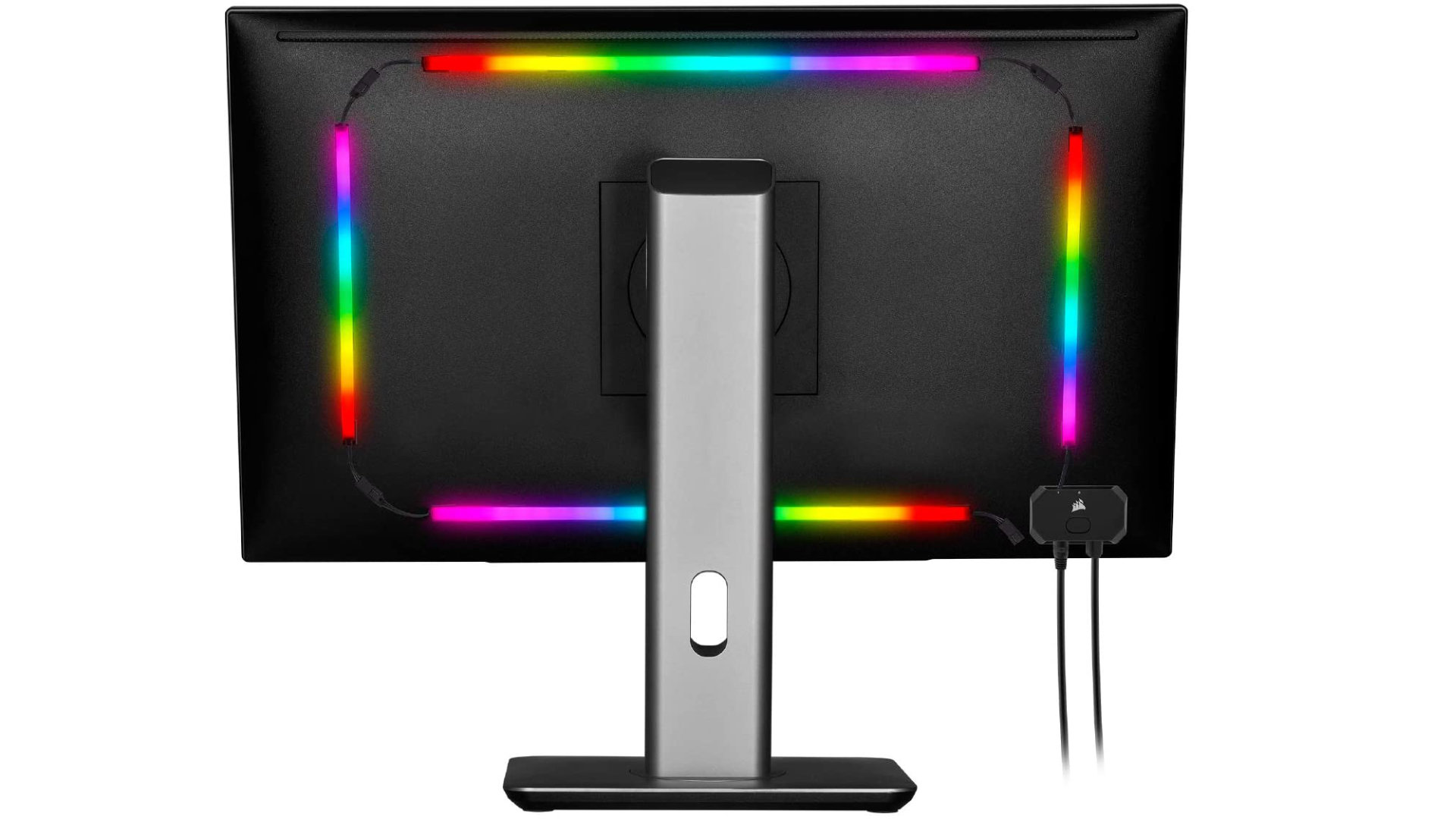 Lighting strips often require you to strategically place them out of sight so you don’t see the glare of the bulbs underneath. If that isn’t a choice for you or you simply want your lighting proudly on display, the Corsair iCUE LS100 smart lighting strips sidestep this issue by diffusing the light so it’s easier on the eyes.

The starter kit comes with two long strips packing 27 individually addressable LEDs and two smaller strips with 15 LEDs, each attached to a lighting controller that lets you customise your colours. Since the case softens the light, it’s not quite as bright as others on this list but it blends colours together for smoother animations. 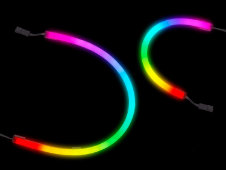 What should you consider in a strip light?

Length, brightness, mounting options, controls, and the colours on offer are the biggest factors to think about before purchasing a strip light. You might also want to consider the type of LED, as the two Ws in RGBWW indicate that it offers warmer whites than your usual light.

Can you bend LED strip lights?

Most LED strips are flexible enough to withstand soft curves, which is why they often come in a roll. If your bend requires you to almost fold the tape, then you’ll need to be careful not to sever the connection.

None of the suggestions on this list are waterproof, but those with an IP rating are much harder to bend without breaking because their coating often makes them more rigid.