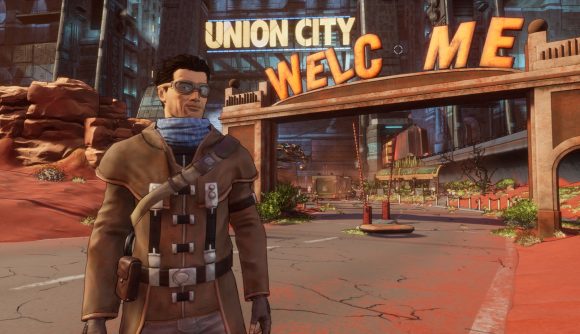 We’ve been hearing talk about Beneath a Steel Sky 2 for about as long as PCGamesN has existed, but it looks like the end is finally in sight. Revolution Software officially announced Beyond a Steel Sky as part of the Apple keynote earlier today – but if you’re worried this’ll be an iOS-only release, you shouldn’t be. It will launch on PC, as well as other platforms, in “late 2019.”

The original game was made in collaboration with comic artist Dave Gibbons, and he’s returning to provide art for the new game, as well. Gibbons says he and Revolution CEO Charles Cecil have “discussed returning to the Beneath a Steel Sky universe many times over the years. Fake news, social controls, polarized views – the world is confusing – we agreed that now was the right time for Robert Foster to take a trip back to and beyond that Steel Sky.”

Beyond a Steel Sky will again be heavily story-focused, but there’s a deeper focus on sandbox play where you can interact with and subvert with the world’s machinations to build emergent solutions to the puzzles in your way. The early info puts a big emphasis on AI tech – just as the original game did all those decades ago.

You can get a very brief look at gameplay through the opening minute of the Apple Arcade trailer below.

If you haven’t previously played Beneath a Steel Sky, you don’t have much excuse. It’s been free for ages, whether conveniently packaged on GOG or provided as a standalone download through projects like ScummVM.

Read more: Check out the best adventure games on PC

The popularity of Beneath a Steel Sky may come more from its free release than its original launch at this point, but the cyberpunk world it detailed has rightly been canonised among the point-and-click classics. The new game is pursuing a somewhat different format, but it looks like it’ll keep the classic spirit alive.