Beyond Eyes casts you as Rae, a blind girl who inhabits an idyllic walled garden but decides to leave safety and familiarity behind after her friend, a cat named Nani, stops visiting.

Its world isn’t seen per se, but rather drawn in Rae’s head – a procedural painting assembled from the things she touches, hears, and sometimes smells. In short, it’s the excuse for ultra-short draw distance game designers wish they’d thought of in the ‘90s.

The concept is every bit as bold and sentimental in practice as on paper – but even over its three hour running time, Beyond Eyes is scuppered by design far less brave than its protagonist. 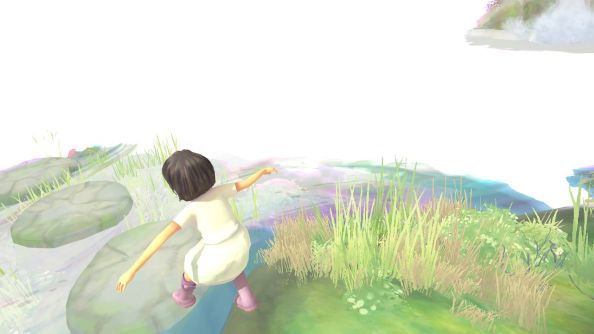 When Rae enters one of Beyond Eyes’ handful of levels, only her very immediate surroundings are visible. But as you direct her about the place in third-person, the purply, nebulous swirl at the edge of your view begins to take shape, becoming trees, houses and fire hydrants. What you’re seeing is the world as Rae constructs it in her memory, and it’s beautiful – like watching a 3D watercolour mixed into being. It’s a picture literally coloured by its creator’s sense of wonder, with a beautiful palette of pinks and greens.

The world outside of Rae’s experience is white space – but noises offer occasional glimpses into the blankness. A twittering bird might provide a fleeting view of the archway it’s perched on, like the RSPB’s own sonar, before vanishing again. A grocer can pop briefly in and out of existence as he rustles his newspaper – a shimmering mirage, and a clue as to what’s coming next.

There’s a bubble wrap satisfaction to be found in pushing back the fog, filling in the gaps in your knowledge, until the picture is somewhat complete. Not that it ever can be, really: once Rae embraces the wider world, she finds that the library of noises learned in her Secret Garden-esque hideaway don’t serve her especially well. What sounds like the flap of clothes on a line might turn out on closer inspection to be a scarecrow; one reality being supplanted unsettlingly for the other in-game. 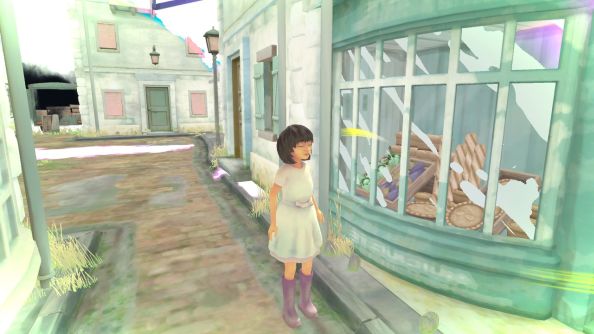 There’s an element of surrealism: in one case, Rae’s inability to find a mental match for a lawnmower sees a family car planted in the middle of a public park. Her memory can be out of date, too: a pile of barrels might appear to block the way – until a whistling workman walks straight through their supposed location.

As unfamiliarity sets in, the colour sometimes drains from Rae’s world. But it soon floods back with that sense of wonder – reignited by a path over a babbling stream, or a pen populated by chattering chickens.

Your own sense of wonder might suffer for Beyond Eyes’ demands on your patience. The conceit may be lovely, but remember that thing with GTA III on PC where objects didn’t stream in fast enough, leaving you to plough sports cars into invisible low walls? That. There is no narrative context, I am now convinced, that can make the sudden discovery of a fence lying across your intended route not frustrating. 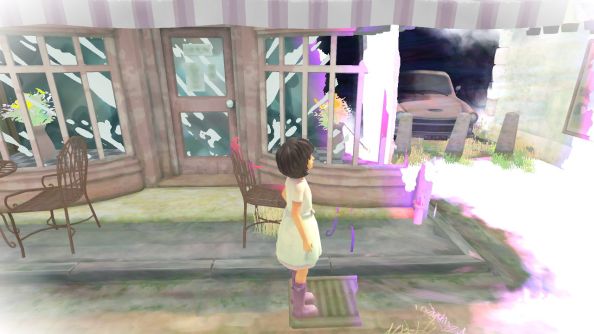 That frustration is compounded by Rae’s pedestrian pace. At times, when you’re willing your avatar to move just a little faster, Beyond Eyes feels like an adventure game from the dawn of 3D. Yes, it’s absurd to expect the tumbling acrobatics of the best platformers from a high-concept story starring a blind girl – and if you can leave your baggage about controls at the garden gate, you’ll be better off for it. But actually, contemporary adventure games have already discovered ways to expedite screen-crossing in well-trodden areas. Holding down W to follow one of many maze-like paths in Beyond Eyes, I longed for cruise control.

When developers Tiger & Squid send you marching down the wrong cul-de-sac, backtracking can feel so painful and punitive that you’ll start looking for the most efficient routes to your goal – which is no kind of exploration at all.

A certain amount of backtracking is enforced by the less friendly creatures in Beyond Eyes – barking dogs or cackling crows that aren’t actively hostile, but project an aura Rae can’t enter. They’re used as binary, Zelda-ish mechanisms for halting progress – and budged by scripted events that are often triggered by the only point of interaction available at a given juncture. Beyond Eyes is only a puzzle game if you consider an episode of Scooby-Doo a whodunnit. 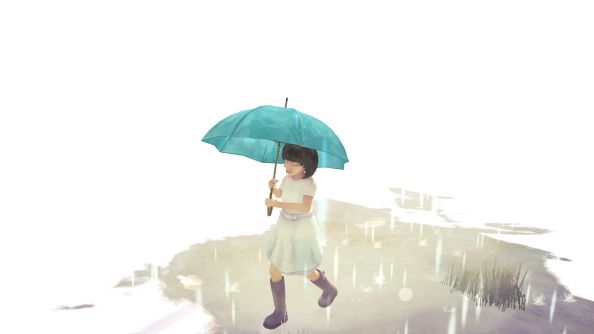 I kept expecting some new mechanic to materialise – something to take advantage of this strange world in the memory. A nice twist in the latter part of the game tweaks the formula ever so slightly – obscuring your on-screen memory of where you’ve been, leaving you almost totally lost but for your own recollections as a player. But elsewhere, the loop is simply repeated: presenting the player with an objective, a blocked route, and the impression that there’s another way around.

As Rae nears civilisation, you’ll want to peel back the whiteness for its own sake. Later areas have the appearance of a rural French market town, all street cafes and cappuccinos, butchers and bakers, and not a single supermarket within sniffing distance. It’s a genuine pleasure to peek under the shop canopies and through the windows, to see the picturesque rendered so strangely.

As an exercise in empathy, Beyond Eyes is brilliant. As Rae muddles through her self-induced socialisation period, you’ll see her sense of adventure overcome her fear of the unknown. Its message is loud and clear – to let life in, with all its risk and upset, so that the good can enter too – and its conclusion Watership-Down uncompromising. What’s more, it’s occasionally fun to indulge in a small-scale kind of exploration that encourages you to feel out the entirety of your environment rather than cast your eyes about for enemies and items. But for the most part the execution is too simplistic, and the frustrations are too frequent. Beyond recommendation.