They say write what you know, but game developers overwhelmingly don’t. The medium’s foremost satirical take on US violence and consumerism? Assembled by Scots. The American Revolution? Tackled by Canadians. Victorian England? Canadians again.

Pixelbomb Studios are drawing the skyline they see from their office in Manchester, UK. Beetham Tower, by far the tallest construct in this northern industrial metropolis – and one which someway resembles City 17’s Citadel as visitors roll into Piccadilly station – plays a heavy role in the plot of their third-person mech shooter, Beyond Flesh and Blood.

Fancy visiting somewhere you haven’t been before in a game? Try one of the best sandbox games on PC.

“We’ve tried to tie it in with architecture in the city and as the game progresses you explore through Manchester,” says level designer Corey O’Beirne. “The sixth level in the game is a five-minute walk from where we work. The Met [tram] stop I get off at to get to the office, I have to walk through two levels to get in.” 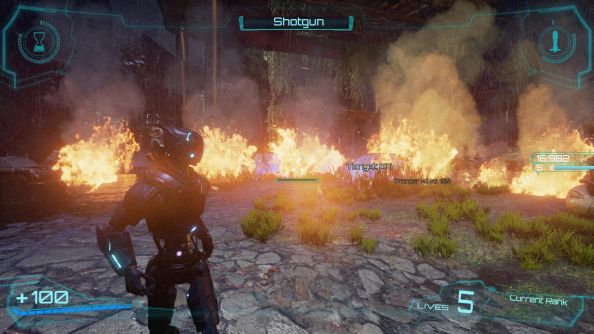 It’s not a one-to-one recreation. Some things have changed. As any city planner can tell you, two centuries, a ruinous global war and a meteorite strike will do that to an urban centre. Most of Earth’s population now lives in an orbital station on the edge of its atmosphere – but after an expedition sent to study the Manchester impact site goes schtum, a mechanical engineer named Ethan is asked to accompany a peacekeeping force on a recon and rescue mission. What follows is a “Mancunian baptism of fire”.

As the mission spirals out of control, Ethan’s fight to survive eventually encompasses responsibilities far outside of his job description. But Pixelbomb are keen to keep hold of the idea of an engineer doing his best with the tools available. The first mech players clamber inside is more-or-less a “future JCB” – a 23rd century forklift used to lift heavy boxes. Caught up in conflict with an alien hive race, it’s instead used to hurl boxes, run through walls, knock enemies over and rip them apart. Equipped with a welding laser designed to repair, you’re instead overcharging and upgrading it as a cannon.

“The colour scheme of the initial civilian mechs is yellow, and they’ve got warning tape,” says O’Beirne. “But the final mech in the game is a prototype – very sleek, very smooth, a very sophisticated suit. Each mech had its own purpose.” 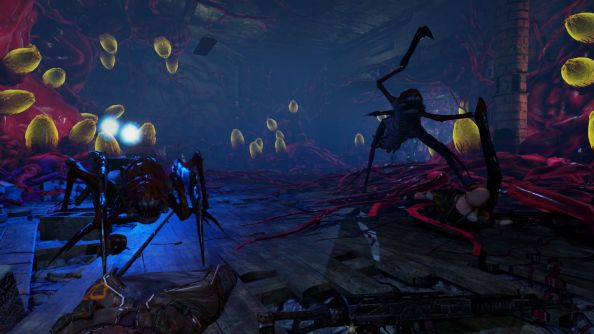 Ethan will progress from bulkier machines, best employed right in the middle of crowd scenarios, to the option of more agile mechs capable of dodging fire and rapidly vacating unfavourable situations. The team have looked to Vanquish, Platinum’s cult console shooter, for its agility and arcadey slide-boost mechanics (“That was a feeling we wanted to mimic,” says O’Beirne).

Even as the engineer gets his hands on military-grade gadgetry, however, the brutally practical techniques encouraged by that early factory machinery remain. This is a profoundly gory game. To find what’s Beyond Flesh and Blood, apparently you’ve got to get the stuff everywhere.

“We’ve got a lot of cameras in your face and show a lot of blood when you’re ripping people apart,” discloses level designer Josh Wright.

“I think the gore is [to get across] the mechs themselves,” offers fellow level designer Jonny Pickton. “Like, this is the damage they could do to a human.” 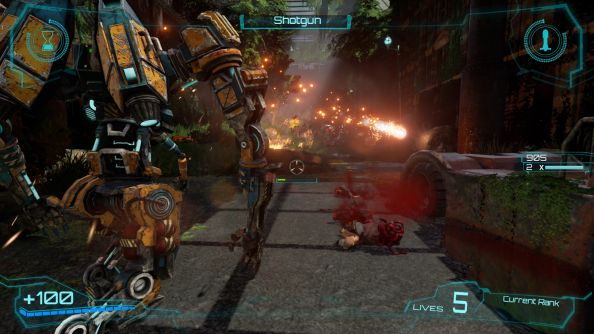 “It’s very over the top, extreme on purpose,” adds O’Beirne. “Like the original RoboCop film, which was ridiculously violent, it’s a little bit tongue in cheek – a little bit pop.”

Pixelbomb have found Unreal Engine 4’s GPU visualiser instrumental to that purpose, particularly in the latter phase of development where the need for optimisation has loomed large. When proceedings on-screen get a bit, er, busy, the team have quickly been able to put their finger on the source of performance drops.

“I think there’s been a learning curve to [Unreal 4], especially for the artists and ourselves,” says Pickton, who alongside Wright and O’Beirne was hired straight out of uni. “With us at the minute it’s to do with overscreening, where we make sure the engine can cope with what we want it to perform at. But we know the engine can do this – we have to work out how we can achieve it.” 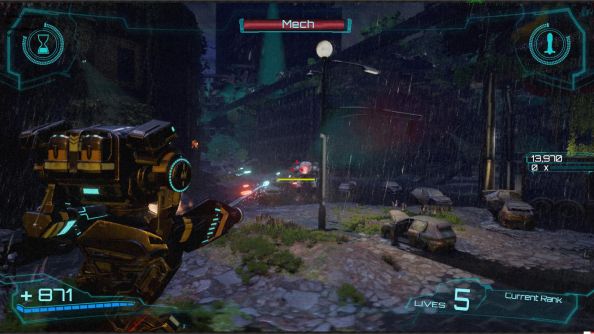 O’Beirne recalls the road decals Pixelbomb’s artists designed early on. As soon as those British markings hit their digital streets – a white and yellow language he reckons he hadn’t seen in a game since The Getaway – Beyond Flesh and Blood felt suddenly both familiar and fresh.

“We walk the streets we’re making levels of and it’s like, ‘Oh yeah, just done this in the engine,’” laughs O’Beirne. “It’s just nice to be one of the games doing something other than London. Manchester is an up-and-coming city, especially with games and media. It’s nice to be making a game here, knowing that the future of Manchester is quite bright.”

Even if they did have to write the city a pretty dark future to do it.

Beyond Flesh and Blood is available for pre-order. Unreal Engine 4 is now free.

In this sponsored series, we’re looking at how game developers are taking advantage of Unreal Engine 4 to create a new generation of PC games. With thanks to Epic Games and Pixelbomb Games.