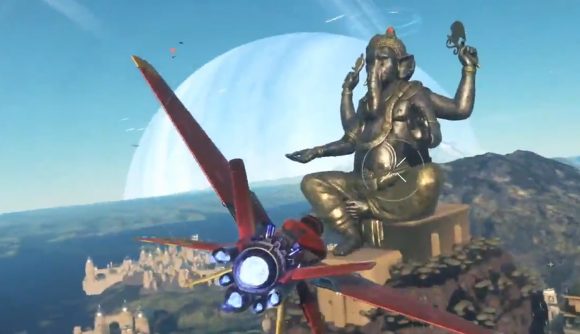 December 10, 2018 A full 25 minute gameplay demo of Beyond Good & Evil 2 breaks down what to expect in greater detail than we’ve ever seen before.

Another round of Beyond Good & Evil 2 gameplay footage is here, offering a further taste of what to expect from the prequel. The video is based on the same demo we saw back at E3, but shows vastly expanded detail – including co-op play, character customisation, and what abilities you’ll be able to make use of.

You’ll have access to a gun, sword, and jetpack as your key abilities. You can upgrade those bits using ‘augments’ – powers that can be attached to your character or your weapons. Putting together a deck of augments will allow you to define a unique playstyle for your character. Enemies have augments too, and you can scout those out with a spyglass to get a preview of how foes will act in battle.

BG&E2 is playable solo or in co-op, but even if you’re playing with a friend you don’t have to stick together. You can team up to accomplish objectives together or split up and head to disparate corners of the world to accomplish objectives on your own. This ties back into the sense of scale the developers have kept emphasising, as you can move seamlessly between confined interior areas and full-on ship combat in the sky or space.

You’re a pirate captain, and you’ll design your avatar with a full character creator. You can choose your gender, appearance, and your DNA makeup – meaning you can choose to be an animal hybrid, whether a shark, monkey, pig, or whatever other option catches your eye. You’ll get more cosmetic options throughout the game for both your character and your ship.

You can watch a set of highlights from the demo below, or check out the full demo in the Twitch archive here – the demo starts at 30:50.

This is a much more substantial look than we’ve gotten previously, and though elements are rough – the developers warn that this is all pre-alpha content – the scope and scale of the project is looking more impressive all the time. The Beyond Good & Evil 2 release date is likely very far away, but you can bookmark that link for new details on the game as they come in.