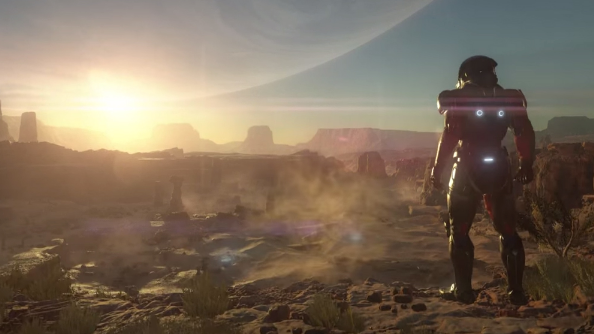 BioWare aren’t just working on Mass Effect Andromeda. There’s another game in a completely new series in the pipeline, and it’s due to be revealed in the “not too distant future”.

Mass Effect: Andromeda finally got a gameplay trailer, and in 4K.

EA Studios boss Patrick Soderlund spoke about the BioWare announcement in a chat with GIBiz.

“We’ve been very open about the fact that BioWare is working on a new IP,” says Soderlund, “and we’ll get to talk about that in the not too distant future.

“We have other teams working on new IP as well. I think it’s about a balance, right? Making sure that we continue to push what great looks like for Battlefield or FIFA or Madden – or Star Wars, for that matter – while continuing to invest in something new.”

BioWare’s new IP is being made by BioWare Edmonton, the same studio that’s behind Mass Effect Andromeda. Before this year’s E3, EA teased that we’d be getting a new BioWare IP next year, so that’s potentially two big RPGs from the studio in 2017.

If it’s still on track for 2017, surely we can expect a reveal before the next E3. Perhaps we’ll see something at the September 7 Sony press event. Hopefully it’s multiplatform.

As for Andromeda, we still know very little, considering it’s due out next year. We do know that Dragon Age: Inquisition won’t be a template for the game, however. Hopefully that means there’s a bit less filler.