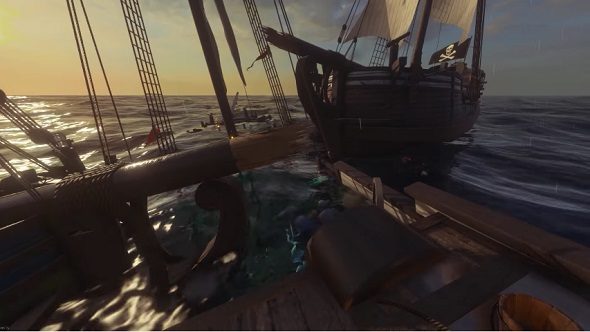 If you’re looking for a game to play with a crew of your finest shipmates, while slinging back grog and swearing like sailors, Blackwake may be just for you. Styled as a multiplayer naval FPS in the same vein of Guns of Icarus Online, Blackwave has you battling against enemy ships, where one player is tasked as captain while up to 15 other players act as the crew.

Hey. You like shooting things? These PC shooters may be right up your street.

As some modes having up to 54 players facing off in ship to ship combat, Blackwake can become a mass of bloody fun to play with friends. With small scale 1v1 ship battles to massive 3v3 fleet fights currently in Blackwake, there is the promise of more game modes as development continues. The core combat of Blackwake is suitably brutal, with cannonballs causing massive damage to vessels, sending sailors and splinters flying into the air. Players ragdoll quite spectacularly when hit with a cannonball, so expect plenty of laughs as your man in the crow’s nest is sent spiralling into the sea by some grape shot.

Ships can slam into each other, doing massive damage and resulting in brutal ship to ship combat as crews try to pillage the enemy, as both boats slowly sink into the ocean. Captains will have to account for bad weather on specific rounds and make sure communication is flowing between different decks, to avoid their vessel being sent to Davy Jones’ Locker.

With a successful Kickstarter back in 2015 and constructive alpha tests, the two man crew over at Mastfire Studios are hoping to make Blackwake a fun-filled adventure on the high seas. The team promise no paid DLC or pay to win items to divide the community, and are in active communication with Blackwake fans on Reddit and in their own Discord. There is no fear of this project being suddenly scuttled out of nowhere.

Blackwake is currently 10% off on Steam until March 3, going for $17.99/£13.49. It is set to be in the Steam Early Access drydock until autumn of this year, when it will properly hit open water.