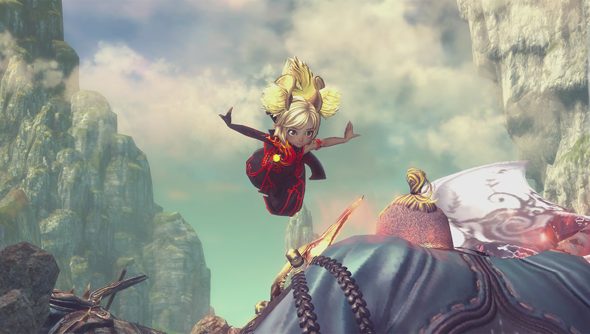 Blade & Soul is a martial arts MMO which draws on the Chinese cinematic world of wuxia, most famously exported in Crouching Tiger, Hidden Dragon. You might also have recognised the genre’s signature high-wire antics in Kill Bill – or be familiar with its tradition of the young male protagonist who suffers a personal tragedy and studies combat technique under a wise master (hello, Luke Skywalker).

Thankfully the game has an expansive character creation tool, so you needn’t play as that young male. But the rest of the outline holds true: in the very tutorial a clandestine group of baddies kills your master (sage, diminutive, softly-spoken – you know the type), takes his sword and, in the words of NCSOFT West community director Omeed Dariani, “fucks off”. The entire game is spent working out why this sort of thing is happening – and adjusting to the twists and turns lobbed at you along the way.

Plot, so often chopped up for wiki quest guides in this genre, is one of Blade & Soul’s great strengths. 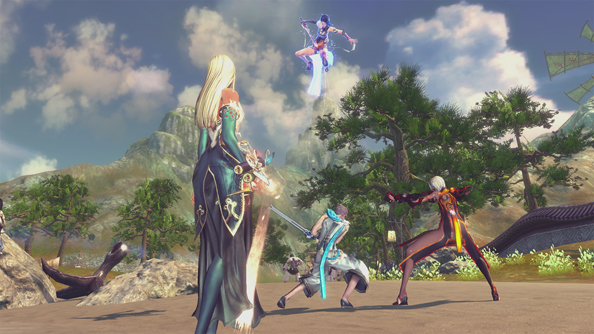 “We’ve taken a lot of time adapting it, because the story is really good,” says Dariani. “We’re not just localising, we’re not doing a direct translation. We’re really making sure that, in English, French and German, it really reads well, it’s super-understandable, and you really get involved in the story.”

There are already six chapters in Asia, where Blade & Soul is well-regarded enough to have spawned a 10,000 signature-strong petition to bring it to the West. NCSOFT West will launch the MMO in the first three months of next year with half of that story, and have plans to roll out the rest afterwards.

There’s unfamiliar stuff going on in Blade & Soul’s innards, too, that suggests it’ll be worth disemboweling once it arrives. There are no mounts. Instead, players get around by ‘wind-walking’ – gliding about the world just as Ang Lee’s actors did.

Combat is as hands-on as Crouching Tiger fans would expect – all about pouncing on your enemies and parrying their swings. And there’s a contextual system at work that means there’s no need to memorise key combos as long as your phone number. Instead, the left mouse button reconfigures to the most useful option in a given moment. 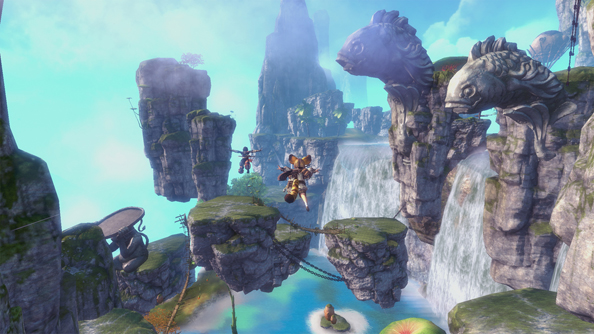 In a tense touch, downed solo players have a chance to crawl to somewhere safer and meditate until ready to return to the air – but if they’re disturbed by a mob, they’ll suffer all the penalties you’d expect of death.

Unlike most of its peers, Blade & Soul decouples armour and outfits. Cosmetics are one of the primary ways NCSOFT plan to make money in this free-to-play game – selling you fancy threads without impacting combat prowess. Dariani says Blade & Soul’s business model has been finely tuned for each region – and in any case, the MMO’s PvP has proven to be highly competitive in Asia, so the publishers “can’t sell power”.

Elsewhere, NCSOFT will charge for convenience and quality of life items – XP potions, extra character slots, bigger inventories and the like. They’re keen not to gate progress by charging for dungeons or expansions: “We want everyone playing together.”

A paid-for premium membership offers to bundle those benefits together. NCSOFT will work out the details of that after a closed beta in the autumn, but know the deal will include priority login, wind-walking particle effects, plus XP and gold boosts for “people who don’t have tons and tons of time”. 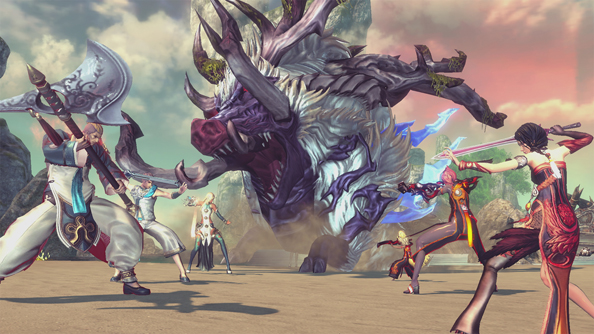 “My favourite thing about it is that as you go, if you’re spending cash currency or the free currency, the membership levels up,” explains Dariani. “So it actually improves over time. If you never spend, every time you look at this offer, it gets better. A year from now, it’s just a better deal.”

There are perks related to Blade & Soul’s cross-server auction house too, which NCSOFT expect to be “bustling” and well-balanced thanks to sheer player numbers.

In the meantime, the publishers have been working on founder’s packs. Available today in North America and Europe, the packs come in three varieties, all of which offer closed beta and a head start on launch. The upper tiers also include months of premium membership, and early access to player titles and character creation tools.

Those names and looks might be worth preserving. According to Dariani, Blade & Soul chapters are “like seasons of Game of Thrones”. And they’ve got at least one thing over George Ah-Rah: we’ve never seen Rob Stark fly.