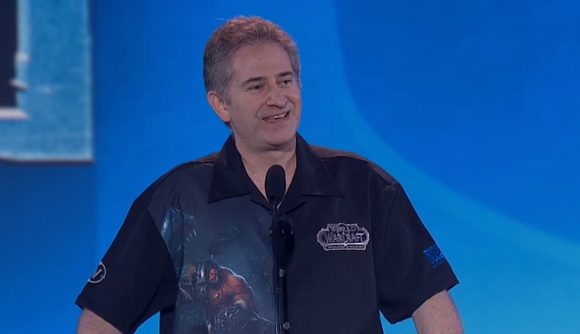 In October 2018, Morhaime stepped down as president of Blizzard Entertainment, to be succeeded by World of Warcraft executive producer J. Allen Brack. Morhaime stayed on as a strategic advisor, but according to a new form 8-K filing with Securities and Exchange Commission, he is now retiring from that role too. Update: he hasn’t left yet, but will do so on April 7 this year – an earlier version of this article didn’t make that clear.

The news comes amidst a seismic shake-up of Activision, the other half of Activision-Blizzard. Several senior executives have left, and we learned last night that it is dropping Destiny, leaving Bungie to self-publish its social shooter, which had disappointed Activision (yet delighted fans) with its latest expansion.

The company’s stock has been trending downward since October, with an especially steep drop after the poorly-received Diablo: Immortal reveal at BlizzCon. There have since been reports (via Kotaku) of Activision becoming more active in Morhaime’s side of the business – until recently it was thought that the two brands were kept structurally separate.

Today’s announcement came with minimal fanfare, but when Morhaime stepped down as president back in October, he left the following statement:

“After many years of working with some of the industry’s most talented people to create games and worlds for you to play in,” Morhaime says, “I’ve decided it’s time for someone else to lead Blizzard Entertainment. I will now serve as an advisor to the company I so love and admire. My duties as president of Blizzard will be assumed by my friend, colleague, trusted advisor, and longtime steward of World of Warcraft, J. Allen Brack.”

Brack added “One thing that won’t change going forward – our deeply held commitments that are core to who we are as a company: to gameplay first, to quality in everything we do, and to listening to and partnering with our community.”

Read more: Blizzard has given us some of the best PC games ever

Morhaime has been with Blizzard for 27 years, overseeing the company through all its history, whether that be RPM Racing, Warcraft, WoW, or Overwatch. He led the opening ceremonies at the annual fan gathering, which means his appearance at BlizzCon 2018 was his last.