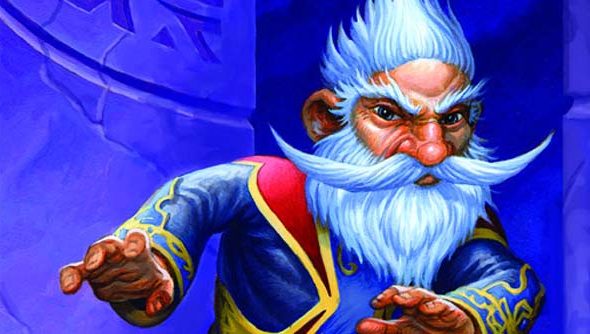 Oh sure, building an Arena-ready deck can require significant investment. But between Practice mode and the Curse of Naxxramas campaign, there are plenty of cheap opportunities to bulk up a competitive card collection. Blizzard have been “generous” – deliberately so.

“We’re here for the long run,” said producer Yong Woo. “We’re not here to make a quick buck. I want to be playing and working on Hearthstone 10 years from now.”

Feedback from Hearthstone players has overwhelmingly indicated that its pricing is “very generous”, said Woo.

“For us, that’s important,” he told IGN. “Instead of focusing on maximising immediate profit, Hearthstone is really about being able to play it how you want to.”

His ten-year-plan was echoed by production director Jason Chayes in a chat with GamesIndustry.

“We talked about this idea of [hero/villain discriminators] white hat, black hat from Westerns, and one of the goals we set for ourselves was that we wanted to do microtransactions with a white hat,” said Chayes.

“When Blizzard approaches a game it’s with the intention of making something that’s going to be around not for a month or two or a year or two but something that we’re really into for the long haul. A game that we plan to support for many many years to come, and that’s certainly the case with Hearthstone.”

Here’s to Hearthstone’s 10-year reign. Just a month ago, the Curse of Naxxramas campaign brought the CCG its “strongest week ever” – and the Hearthstone dev team has lately grown from 15 staff to more than 30.

Meanwhile, Blizzard have “six or seven” World of Warcraft expansions planned – enough to take us through to 2024. The oceans may rise and the lands burn, but there’ll still be PC games coming out of Irvine. You happy about that?