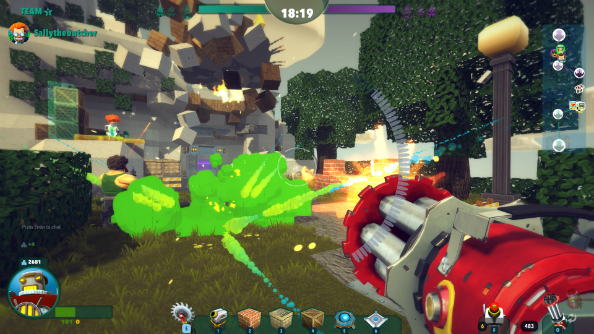 It may only have been released back in April this year, but Block N Load is already undergoing massive changes. It’s broken free of the shackles of money, and allowing all to enter its angular arenas without paying a penny. Yes, Block N Load has joined the free-to-play revolution.

With just a few months under its belt, just why has Jagex dropped the guillotine on the price tag? Well, because players – perhaps including you – wanted the game to be free. “This is a response to our community and players. Even during the beta there was a lot of people saying free-to-play is where it’s at,” explains design director Ben Smedstad. “We listened and followed up on that. It just made sense.”

It’s understandable why many players would think Block N Load would work well as a free-to-play game. As a hero-based shooter, a lot of its systems are akin to League of Legends, or other free-to-play games that are based on unlocking new characters. This consensus was an eventuality Jagex had planned for: “A lot of the systems we have were put together with the possibility of free-to-play hooks being there,” says Smedstad. “The foundations were all there. It was about choosing the right things to build on top of. How do we build the economy? How do we make sure it’s not pay to win?”

The design team quickly realised that there was a core philosophy to adhere to when swapping over to free-to-play: you can never pay for power. As such, anything that can improve your character in battle must be earnt through play. These character upgrades come in the form of perks: 57 different abilities, split into offensive, defensive, and character specific categories. Players can equip one of each, but they must be purchased using gold bars, Block N Load’s new currency. And the only way to strike gold is to keep playing. “If you want to kit out your guy all the way, you have to play,” says Smedstad.

Gold bars can be used to purchase the game’s heroes, but characters can also be bought with premium ‘platinum bars’ that are paid for with real-world cash. Other premium products include skins for both heroes and blocks. “We really wanted to keep the premium currency focused on cosmetics and customisation,” says Smedstad. “There’s no gameplay power, or even gameplay options, that are not earnable through soft currency and actual play.”

Much of the rationale behind this is purely down to being sensible: there’d be riots in the forums if Jagex started charging for power. But Smedstad notes that there’s something about Block N Load’s fundamental design that means anything else just wouldn’t work: “It’s a competitive game where being clever matters. The moment you put some cleverness behind a wall, what’s the point? That’s not what we want to make.”

The shift to free-to-play will hopefully bring with it plenty of new players who may have been deterred by the previous price tag, but Smedstad is confident in Jagex’s plan to look after what he refers to as the ‘Old Guard’. “Our community has been with us for months and many of them are from the beta, and they’re super important to us,” he says. “These are the people who are going to help our new players. They’re going to be the mentors on the message boards. We’re doing our best to be overly-generous. If in doubt, give it to them basically. They’re key to this transition.”

If you already bought into Block N Load, you’ll be able to use all nine of the game’s hero characters without paying, and you’ll also find you own all of their skins too. ‘Premium’ owners also get a unique skin that will never be available to free-to-play users, allowing them to show off their status in the community.

The shift to free-to-play also introduces some new features that should keep existing players interested as well as entice new blood. Daily challenges offer frequent rewards for completing tasks within a single match or single day, improved matchmaking should keep everyone playing with people they stand a chance of winning against, and a MOBA-style hero rotation system means everyone will be able to sample each of Block N Load’s characters without every stumping up.

A key thing in transitioning from a premium to a free-to-play business model is that you need a solid long-term plan. If your players lose interest, your game and income crumbles. Jagex have a solid plan for Block N Load, but Smedstad notes this isn’t a response to going free-to-play: they were always going to continually support the game. In Block N Load’s future lies new heroes (including three new characters available from today), new game modes, and new maps.

If something you’re hoping for doesn’t fall under those categories, start making some noise. “We need the community’s feedback, we want them to be involved,” says Smedstad. “Whatever they want, these are the discussions we need to have. There’s no topic that we won’t talk about.”

Block N Load is now free to download and play from Steam.