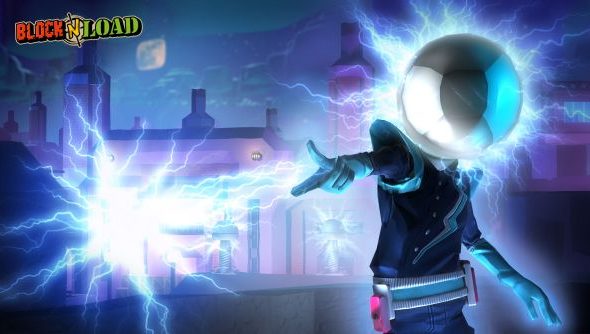 Block N Load is getting a trio of new characters on October 1st and Jagex have sent us all the details on the destructive triplicate. If you’re a fan of big walking balls of electricity, dual-uzi-wielding teenage girls or, uh, yetis, you’re in the right place. They come as part of the largest ever update to the game, which increases the total number of characters from nine to twelve.

This is Kira-chan, a wannabe pop-star with a cute bear hat. Her rocket-launcher fires cats, as I mentioned, and she can immediately turn any firefight into a light show, because that’s the powers you get when you become popular. Money, fame and total command of the colour of natural light. Some might say we give these teens too much power, but I think it’s a fair price to play for the odd catchy tune.

Vander Graaf is guaranteed to be the most electifying man on the battlefield, not least thanks to that sweet moon-walk. He’s not only a king of pop counterpart to Kira, however, and has the ability to fire electricity from his hands, frying enemies or trapping them in a lighting cage. See, now this guy is an actual problem. A few flashing lights I can deal with, having 10,000 volts going through my body I’m slightly less prepared for.

Finally there’s Yury, who seems like a nice enough chap. He’s a communist yeti, which I can get behind, who maybe-probably murdered a skier in his homeland of Siberia to get that fetching outfit. You know, I’m okay with that too, skiers should be more careful of the natural wildlife. It’s less explained where he found the giant snowchucker or how he’s capable of summoning an avalanche at will to crush his foes, so I recommend staying on his good side.

They’ll all show up together next week, ready to blow up blocks, players and anything else that gets in the way. Want to give it a shot? There’s a demo over on Steam.