It feels like it’s easy to dismiss anything that has boxy voxel graphics as nothing more than a cheap and quick cash-in on Minecraft’s popularity. If you’ve already cast aside Block N Load, I’d ask you to reconsider. The “Minecraft meets Team Fortress 2” comparisons are certainly true, but wonderfully developers Jagex and Artplant have managed to recreate those games’ essences in an inventive manner.

Block N Load keeps things very simple: it’s a 5v5 shooter where players choose from a handful of distinct characters to engage in an attack/defend game mode. Each team has a main cube they must protect, and smaller cubes that provide shields for it. Through teamwork, they must both defend their own cubes and bring down the enemy’s.

So far, so typical of many FPSs. But Block N Load is made creative by its use of a Minecraft-inspired destructable voxel world. Pretty much everything is able to be obliterated, with maps often making you recall the environmental devastation of Worms as they crumble under gun fire or shovel strike. 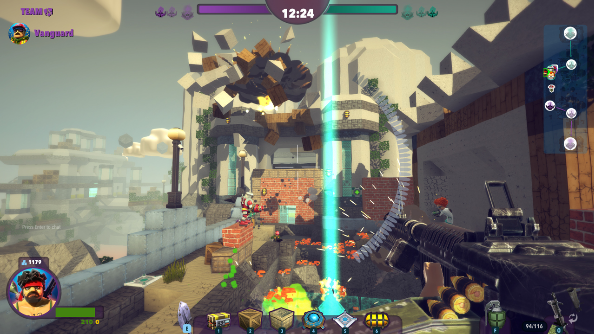 The sizable collection of maps are all of a similar straight and narrow symmetrical design with plenty of verticality, but the ability to tunnel through the terrain or build your own highways means there’s absolutely no guaranteed approach. This makes attacking the enemy a creative, oft-hilarious joy, and defending your own cubes an absolute nightmare. Have you prepared defences for absolutely every potential method of attack? What happens if they tunnel in from below? Do they have a mortar battery set up behind those trees? Did they manage to hide a respawn tile in your base during their last assault, and are about to warp in and go bananas?

Each match starts with a build phase, giving you a little stress-free time to prepare defences. It’s often here that you’ll be able to pre-judge your chances of success. The small team sizes demands strict teamwork – simply throwing yourself at the enemy spawn after spawn will barely make a dent – and if your team won’t co-operate in the build phase then you’re likely in for an arduous time.

Every one of Block N Load’s classes comes with an inventory of special blocks they can use. Cogwheel, a hulking great robot, can create mortars to fire in great arcs across the map. Similarly Antony Turretto can build machinegun turrets for closer defence options. Nigel Purdey-Longshott can hide gas-spitting totems that debuff anyone who passes by. The key to success is combining each character’s special blocks to make inventive, fun, and most importantly, deadly defences. Dig a deep trench, fill it with spikes and bear traps, and then get a character equipped with Fake Blocks to create a floor over it all. The moment the enemy steps on a Fake Block it crumbles and drops the enemy into a spiky grave. 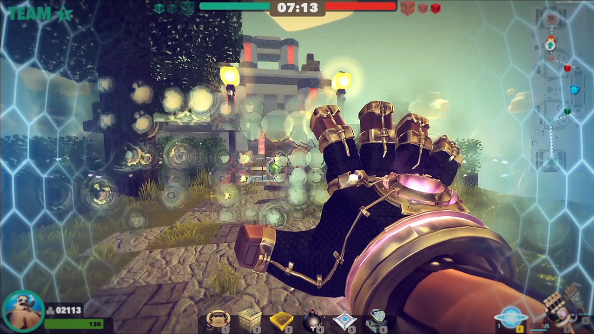 When combat kicks off, each of Block N Load’s characters has something unique to offer. In a MOBA-ish way, they all have passive and active abilities that make them useful in various important situations. O.P Juan Shinobi, for example, can wall climb, making him good for sneaking into enemy bases. And should he be caught, he can hurl smoke bombs which teleport him out of harms way.

Each character also carries a variety of pre-set equipment; two weapons and a tool. It’s all pretty straightforward: the tool helps you excavate terrain so you can either tunnel through things or recycle the material into blocks to build new things with. The weapons provide two different offensive approaches, and are exceptionally unique to your character. Like Team Fortress 2, there’s not really a ‘one-size-fits-all’ character, and there’s very little overlap between anyone. Unlike Team Fortress 2, you play as one character for an entire match, so it’s very much about embracing the role and working out what you’re good at, rather than swapping and adapting to the current situation.

There has quite clearly been a lot of time and effort spent balancing the characters, and in the perfect environment this works out completely for the game’s benefit, rewarding players with tense, tightly-fought battles. Unfortunately these kind of results are far from guaranteed thanks to an exceptionally poor matchmaking system that seems to just grab the first ten people it can find and ram them in a lobby. Being stuck with a senseless team completely spoils any fun Block N Load can offer, leading to embarrassing defeats or stalemates that go on and on because no one will change tactics. 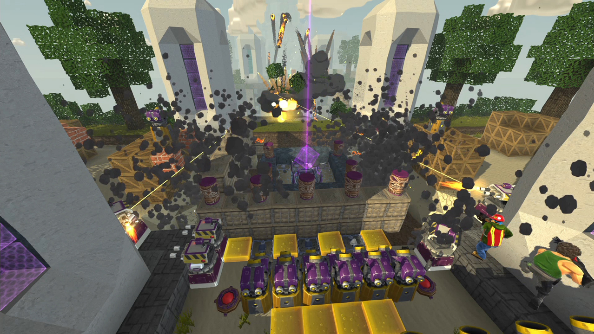 Right now, Block N Load has just one single game mode. On the whole, I like its dedication to simplicity. It’s got a clear goal, with defined characters you can’t really mess with. It’s about discovering the potential of your environment and situation rather than fiddling with loud outs and learning multiple game rules. But the simplicity of attack and defend can, over time, lead to boredom and over-familiarity. There are two styles of game – casual and ranked – and you have to play a lot of casual before you are permitted access to ranked. By the time that comes, it can feel like Block N Load is starting to wear thin.

The main menu currently displays a slot for an upcoming game mode, and hopefully this is a sign of things to come. There’s plenty of places to find inspiration for new modes; Minecraft is absolutely chock full of player-created minigames that are just begging for a professional recreation, and it would be great fun to see traditional FPS modes given the Block N Load twist. With additions like these, the game would certainly boast a lot more longevity.

But the game is only £6.99, and what you get for that bargain basement price is a good slice of well-built fun. When you first boot it up it feels surprisingly robust, and there’s never a sense that it was created on the cheap to cash in. The matchmaking can certainly make or break the experience from match to match, but when the going’s good Block N Load is a smile-generating shooter.