Block N Load has gone free-to-play, meaning it’s now up against dozens of other zero-cost games battling for your attention. But what makes this Minecraft-inspired shooter more worthy of your time than the others, including the likes of the mighty Team Fortress 2 and PlanetSide 2?

It’s all to do with the freedom of its design, according to design director Bed Smedstad. “We designed a game that’s fun when players are clever,” he explains. “That’s why this is a different shooter than anything else. We don’t try to wrangle players super-tightly.”

A Block N Load map is almost entirely destructible. Not in the way that Battlefield: Bad Company’s were; this goes beyond collapsing walls. Other than the key objectives on the map, the world of Block N Load can be dug up, blown to pieces, and rebuilt to suit players’ agendas. It’s Minecraft for the military minded. “The map is exactly as the designer wants it for the first two seconds, and then someone pulls out a shovel,” laughs Smedstad. “Then no holds barred, it’s going in whatever direction it’s going to go.”

As players become more experienced in Block N Load, they realise that you can’t play it quite like a regular shooter. It’s all about subverting the vanilla map design and surprising the enemy with new tactics. This is a game where you can tunnel under the feet of your foes and emerge behind enemy lines. The freedom of the map design and looseness of Block N Load’s overall rules means there’s plenty of opportunities for players to ‘exploit’ the game. “Every time we find an abuse or something weird the first instinct is to clamp down or restrict. We’re the exact opposite,” says Smedstad. “We don’t have control of what the player does. We give you as many tools as humanly possible to let you do whatever you want. That makes designers cry!”

Players making the most of Block N Load’s playground approach is what makes working on the game so interesting, says Smedstad. Jagex run streams twice a week, and each and every time Smedstad sees a player discover something new that he had no idea was possible. “It makes me excited as a game maker, seeing stuff like that. Seeing people be smart and being rewarded for being smart. That’s something a little bit special I think,” he says.

The destructible maps aren’t the only thing that offers a sense of ‘anything is possible’ to Block N Load. Smedstad emphasises that the game is a ‘hero shooter’, as opposed to a class-based shooter, and this makes a world of difference. Whereas a class-based shooter has to have pre-defined roles and each new character has to slot into a specific archetype, new heroes for Block N Load can literally be anything. 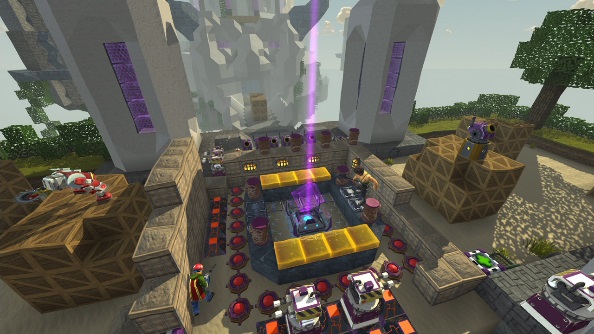 “We don’t want to have all our characters military based, or all sci-fi, or super serious. I’d like to do more kooky and crazy things. I wouldn’t mind a couple of heroes where people look and think ‘What the…?’” says Smedstad on the subject of designing new heroes. And while the philosophy is that new heroes can be anything imaginable, there are some broad rules to follow when designing a new character: “Every hero has to justify its own existence and bring something new. We don’t just want to re-skin sarge. We want to bring something new every time; a hero should bring a whole bunch of new things you can do together as a team.”

This imaginative approach to heroes is apparent in the three new characters that accompany Block N Load’s free to play launch. Vander Graaf uses a set of electrical powers to shock the enemy, Yury the Yeti slows down foes with his ice gun, and Kira-chan is a J-Pop star armed with a kitten-firing rocket launcher. As you can see, anything goes here.

Block N Load is now free to download and play from Steam.