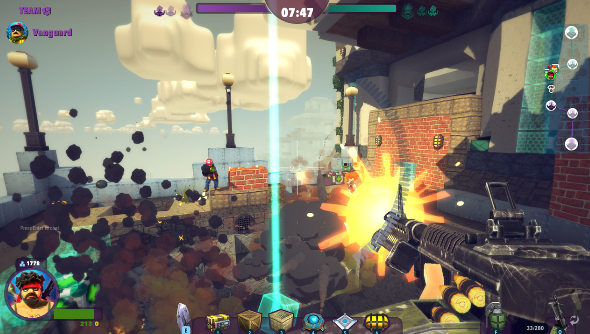 Remember the days when you’d spend more time blasting apart the maps in a game of Worms than actually hunting down the enemy team? Those days can be relived in Block N Load, an insane multiplayer shooter where the environments shatter with every shot. Developer Jagex has let us lose with 2000 codes for the game’s closed beta which is happening right this second, and we want you to have them all.

If you’d like to go crazy with the game’s Team Fortress-like platoon of insane characters, you need just sign into your PCGamesN account and pop an email address into the widget below. We promise it won’t be used for advertising or the sending of poorly chosen GIFs – only this giveaway.

You’ll know if you’ve got a code, because it’ll appear in your inbox as a message from us. Just drop that saucy string of characters into Steam’s ‘Activate a product’ box and you’ll be ready for a blocking good time. You can get started right away, too, as the closed beta is live right now. So be square and tap your email address in now.

Have a read of our Block N Load preview.